Case Study. What makes these some of the most engaged Facebook pages in the UK?

The brand we're featuring in this case has created the third most engaged Facebook Page in the UK. Although Vets Now is the UK's leading provider of Out Of Hours emergency veterinary care, its not a "megabrand", so it really shows what you can achieve if you get the communications strategy right. In this post I'll review what Vets Now set out to achieve and the lessons they have learnt in their online journey.

Whilst many organisations use social media to prop up, or drive traffic to an existing website, Vets Now took the opposite approach. To build a stand alone community of pet owners (quite literally a MumsNet for pet owners), they and their social media agency Fresh Networks decided to begin on Facebook.

Facebook’s huge reach and unique ability to target users by interest were key, and their innovative use of the platform has informed their decisions in the development of the recently launched PetNet360 website.

Park Bench (for dog owners) and Scratching Post (for cat owners) have been live on Facebook since May 2010. Not only does the page allow a great route to interact with the audience, it has alsodriven over 10,000 registrations to the ‘My Pet Profile’ Facebook app, where owners can create a profile for their pet.. The conversion rate from people moving from merely liking the Facebook page through to creating a profile in the app is staggering. Some 17% of fans convert to the app where they can share stories, follow other pets and meet other pet owners like them.

Early research showed that pet owners did not want to get together online and talk about pets. Instead dog owners wanted to talk dog and cat owners wanted to talk cat. So segmenting both the customer base and the communications by pet type were essential to the success of the online presence.

Likes vs Engagement - what really matters?

The engagement level of the 47,000 Facebook fans has been held at a steady 17% on Park Bench and at over 23% for Scratching Post. Other competitor pages, which while they may enjoy large numbers of fans, are struggling to achieve the magic objective of engagement. Head of Digital and Content, Lisa Robb’s mantra for Facebook has become “Likes are vanity, Engagement is sanity”. With the way Facebook’s Edgerank algorithm works, posts to your Facebook page are highly unlikely to actually be seen on your fans’ walls unless they have engaged with you in some way. This is even more relevant now with the changes to Facebook and the presence of the “ticker”.

This is the engagement journey of a Facebook fan as I see it: 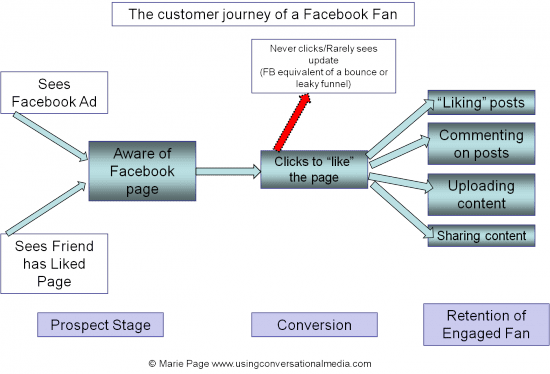 Over the 9 months the Facebook pages have been running the team have learnt what works and doesn’t work. When they started, the page included lots of links to videos and images as well as fairly lengthy status updates. 6 months in the pages show a diverse mix of content including:

With a relatively small budget for advertising, the team decided to phase its Facebook ads, however in retrospect they would advise a faster approach with a larger budget. They have found through testing which ads ones work best to keep people on the page, and crucially, which deliver an engaged fan. Their ad-acquired fans are still converting to the app at the same rate as organic acquisitions. They have also found that advertising produces an exponential increase in fans  (a “halo” effect) where an increase in ad spend also produces an increase in organic likes due to the viral spread of likes on individual users walls.

When quizzed about budget for the Facebook page and app both Lisa and Fresh Networks Account Manager Oli Watts are cagey stating that the set-up budgets were extremely small in comparison to the essential role that good community management plays. The Facebook pages are managed by a team of three at Fresh Networks with input from the Vets Now team. An editorial plan is agreed a month in advance and as the agency team has better understood the world of cat and dog ownership, so they have been able to take on more of the day-to-day running of posting updates and managing the page.