Our summary of the wide number of changes to Google AdWords and Analytics announced at the Google Performance Summit.

Yesterday (24th May 2016) Google announced a whole host of changes to their AdWords and Analytics platforms, citing the shift in mobile as the reason.

"The shift to mobile is no longer a change on the horizon. It’s here."

During the Google Performance Summit, the likes of Jerry Dischler (VP for Search Ads) & Brad Bender (VP for Display & Video Ads) talk through the steps and the processes involved in the decisions behind the changes. Skip to around the 27 minutes to get into the nitty gritty.

For the sake of not making this article too confusing I'm going to split the changes up into two sections:

As previously alluded to, these changes have been prompted by the shift in mobile use and behaviour.

The first major change comes in the form of a complete redesign from the ground up - to help marketers achieve their goals in a mobile-first world.

Although details are a little thin on the ground, there is no need to worry too much. According to Paul Feng (AdWords Product Management Director), the redesign will not impact any of the functionality or the way in which campaigns are structured or run, with the main focus being on how the data is displayed.

As the product will be slowly rolled out over the next 12 to 18 months, the design may change a little, however here is a preview of how it may look compared to the current product. 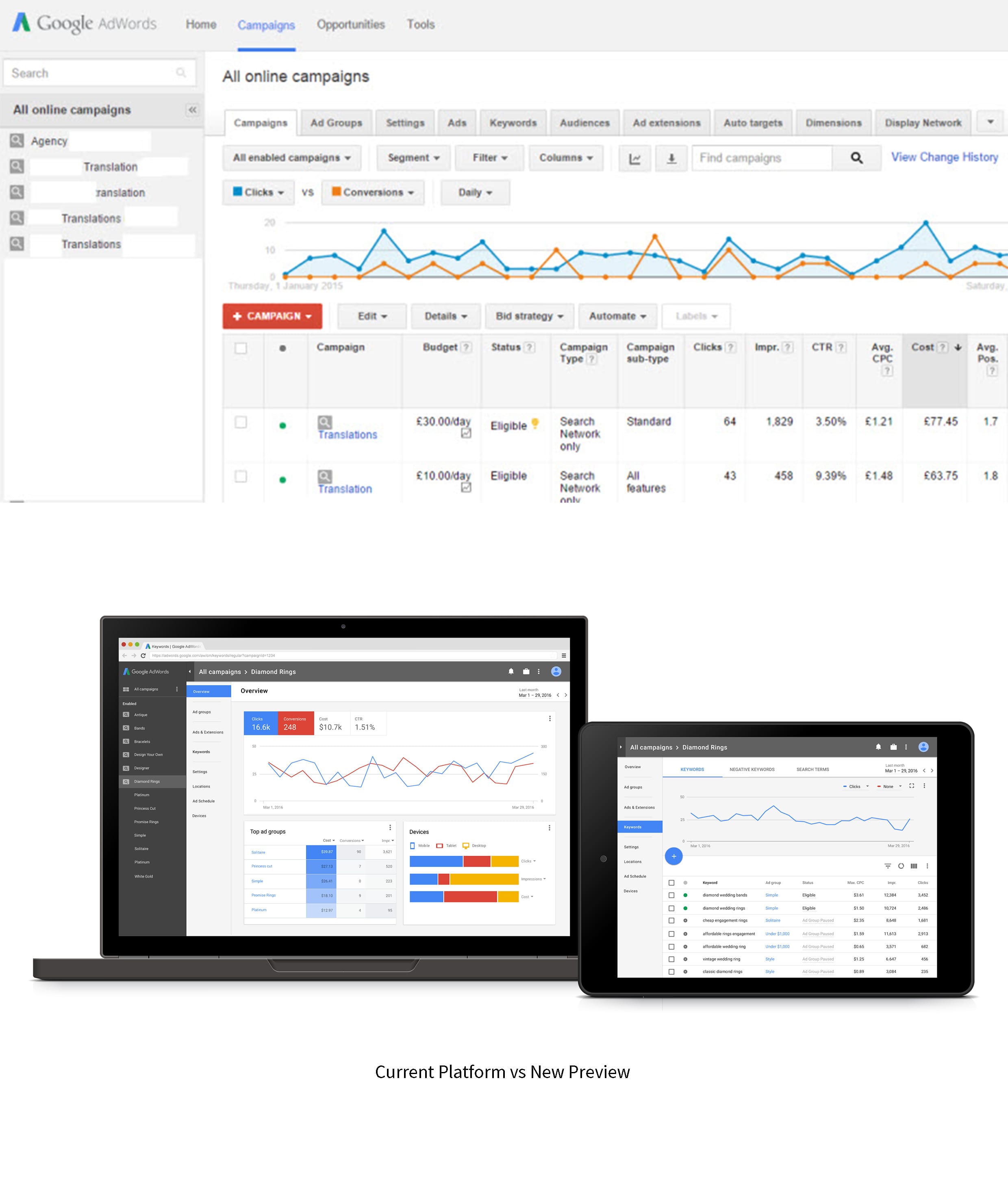 Since removing the right-hand side (RHS) ads earlier in the year to bring search results more consistent across devices, Google introducing quite a seismic change.

They have introduced a new type of ad, the Expanded Text Ad. This is to provide more ad space to "showcase more information about your products and services before the click." The changes have been outlined in the chart below. 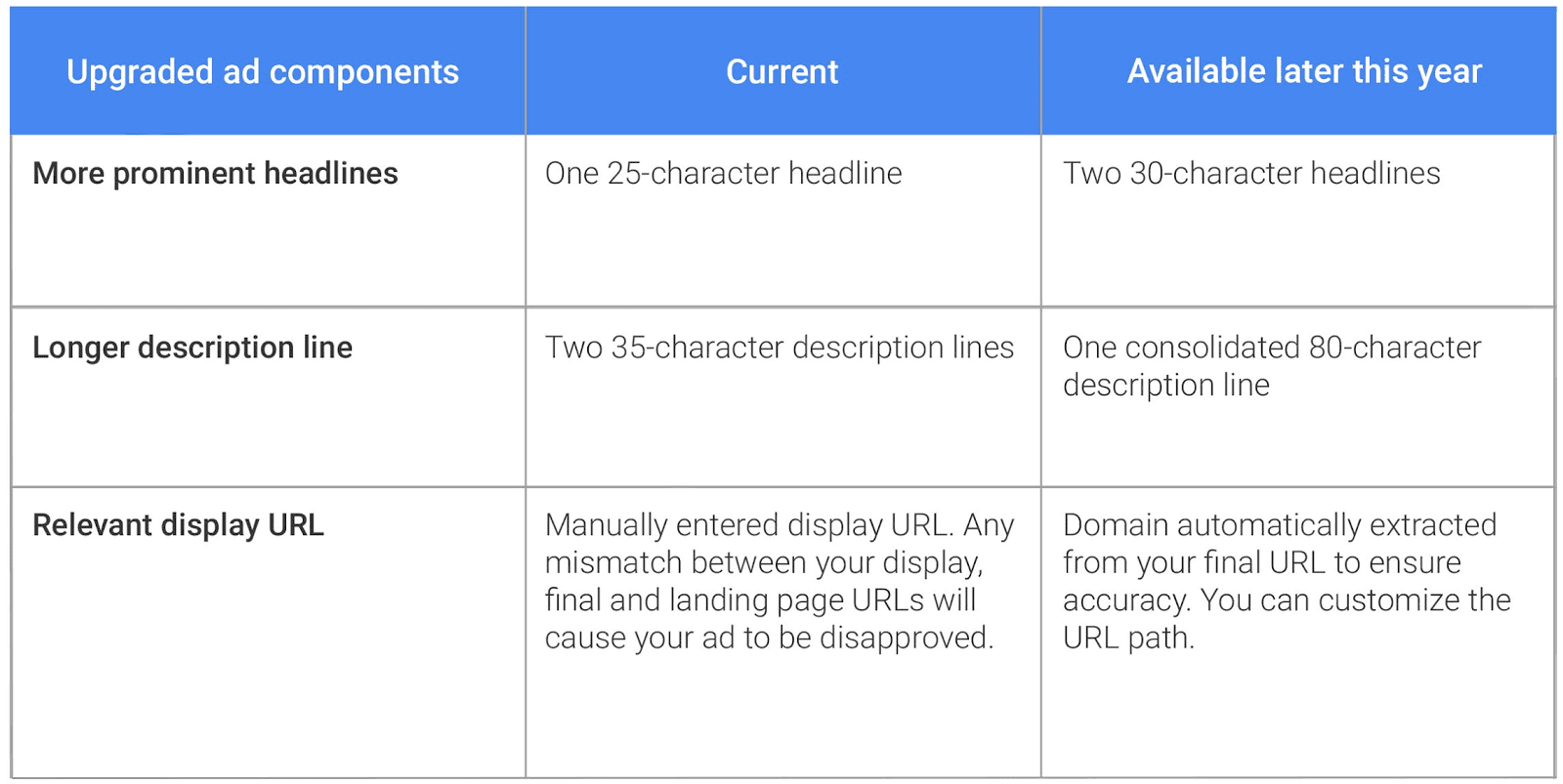 Based on early testing, there have been reported increases in click-through rates of up to 20%, compared to that of the current style of ads. If this is true and representative across all industries, I certainly suggest planning for the upgrade before this rolls out. A/B testing, could see a significant increase in click-through rates and see you out-perform your competition.

The next feature introduced to us on the Paid search front, is the idea of Responsive Display Ads, which adapt to the content across over 2million+ publishers and apps on the Google Display Network (GDN).

They're designed to fit more natively in the content, allowing the ad to match the feel and look of the site it is being displayed on.

Interestingly, it doesn't mean any more design time is needed on the AdWords manager's behalf. According to Google...

"Simply provide headlines, a description, an image, and a URL -- and Google will automatically design these beautiful responsive ads."

Below are some examples of how these will look. 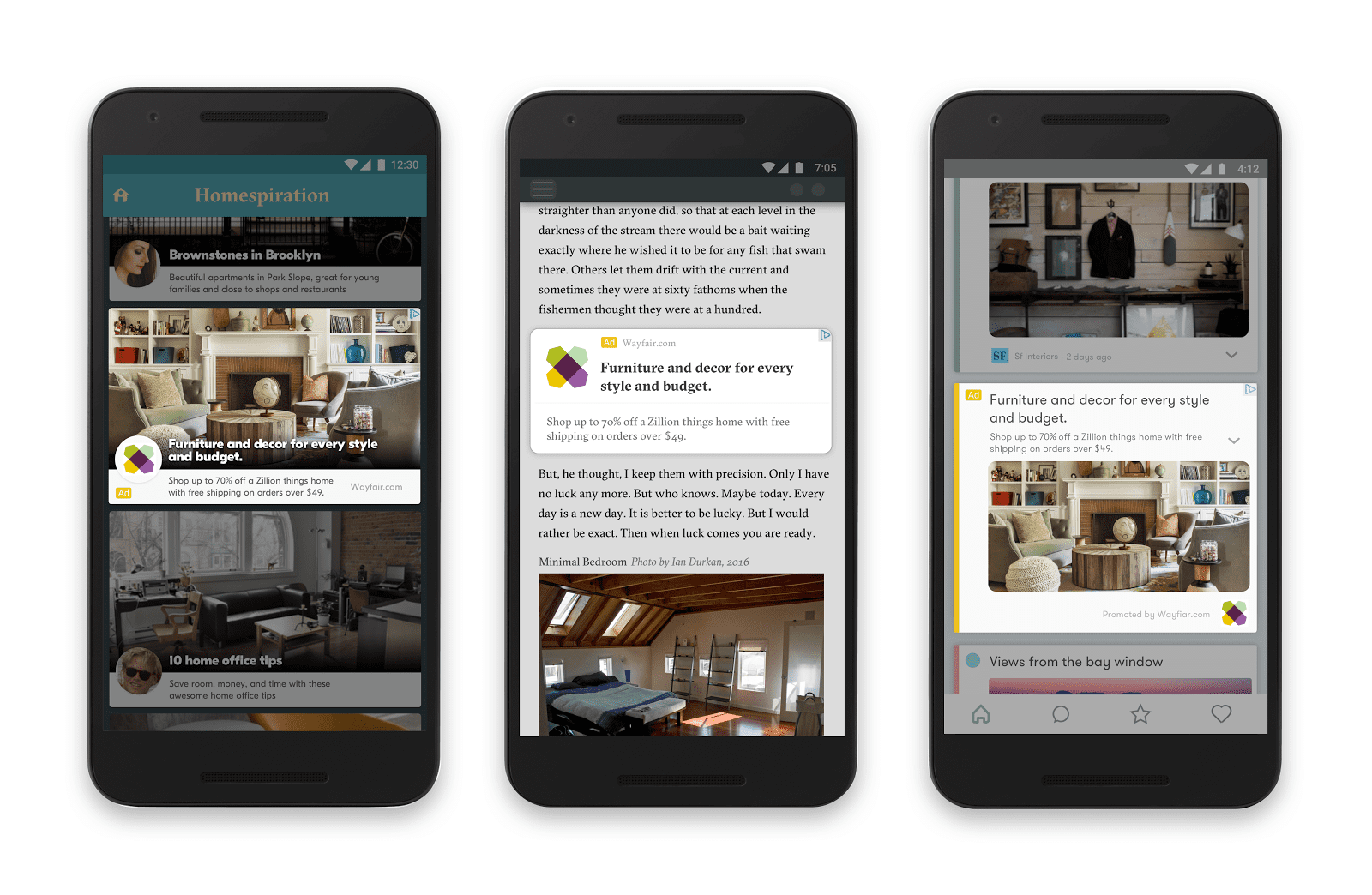 With any changes to the AdWords, one of the first thoughts running through any PPC Manager's head is, how will this impact my campaign?

The major change will come in the form of bidding and will accomplish two things. The first is separating Desktop and Tablet bids, a reversal from the previous decision to tether these two groups together. The second of which allows advertisers to make mobile the sole focus of their campaigns.

“This lets you anchor your base keyword bid to the device most valuable to your business and then set bid adjustments for each of the other devices. You will also have a wider range to adjust bids, up to +900%,” - Sridhar Ramaswamy, Senior Vice President, Ads and Commerce.

Another change, which is worth noting, is advertisers are now able to set a base bid, before setting bid adjustments depending on which device they prefer, allowing for a range of -100 percent to +900 percent.

The innovations and changes for the enterprise-class Google Analytics (GA) are based mainly around the Analytics 360 Suite.

This is beginning to role out to the current customers, in phases over the next several months. The principle behind this move is to unify the product experience, rather than having numerous tools all used independently of each other. This means that Google Analytics 360 (formerly known as Premium), Attribution 360 (formerly known as Adometry), Audience Center 360, and Tag Manager 360 will all be a unified under one experience.

This is a new tool designed for website testing and personalisation, which is now availabe in BETA. Paul Muret, VP of Analytics, Display, and Video Products stated that...

"The results from our closed beta have been amazing: one of our beta customers reduced the time to deploy a site experiment from three days to 10 minutes."

Again, another new tool from Google, which has been designed to tackle the importance of data visualisation. The Data Studio 360, which is a premium product currently in BETA allows you to...

"connect to all your data with native integrations across many popular Google products, as well as non-Google data. Visualize your data by creating reports and dashboards. Share your data across your organization with built-in, real-time collaboration."

Whilst the free version, of the Google Data Studio, can create up to 5 reports which can be shared, edited and collaborated as many times as needed.

Do you understand your ads conversion journey? As Ralph Waldo Emerson supposedly said, ‘Life is a journey, not a destination.’ When it comes to arriving at the right revenue destination for your paid media campaigns, the journey can mean everything. …..