What does research show are the emotions that content must create to encouraging sharing?

Marketing has forever been about making people aware of one’s brand, as a precursor to making them actually desire it. Since the very concept of branding and proactive selling (marketing) began back in the late 19th century, the goal has always been the same, even if the methods have changed beyond all recognition; connect with people whom you feel are likely to relate to whatever product or service it is you are offering, and make them want it.

With this in mind, marketing has been, is and always will be about relating to your audience and whether this is done online, offline, through mainstream or non-mainstream avenues, is largely irrelevant; whatever succeeds in triggering a collective positive emotion in one’s target audience, is always going to be the correct approach. Remove all the jargon and fancy marketing terminology, strip away all of the complicated theoretical models and quickly you will see marketing for what it is: messaging to human beings using perceptive emotional intelligence.

The holy grail for many marketing today is 'viral content'. 'We want a campaign that goes viral!' is the ongoing cat-call coming from the hungry clients and eager organisations alike. Yes, of course we would all like to be the architects of something viral (well, provided it’s good-viral, if you know what I mean), but achieving content sharing on a viral scale is simply not something that can be easily achieved, I’m sorry to say!

Yes, tweeting, messaging, facebooking, poking, blogging, youtubing, picture posting and frantic content sharing via whatever available digital means, is most certainly possible in the physical sense (we do all have access to the required tools 24 hours a day) but does having access to such a plethora of tools turn us into marketing experts? No, of course not; it would be akin to saying that just because we are all physically capable of going to the local garden centre and buying whatever tools we want, we should all be expected to become professional gardeners!

The point is this: marketing is in theory at least - far more accessible to the masses than it has ever been before, as a direct result of social and digital media. As a result, everybody now believes that viral campaigns are easily achievable; not so of course because the simple fact is that creating a campaign of a viral nature, requires an element of ingenuity based on a well tuned understanding, empathy, and human engagement.

Those that succeed do so not because they are good at implementing new digital tools and modern technologies; no, they are successful because they fundamentally understand the concept of marketing and its relationship to human behaviour. Not only do they understand their own brand, their customers and their potential customers, they also know exactly what methods to employ to reach out to them, and make them drool over what they are offering them.

Academic research into this very subject matter has yielded hard evidence to prove that emotion is one of the key factors in creating a viral campaign. In 2012, for example, two University of Pennsylvania Marketing Professors, Jonah Berger and Katherine L Milkman, published research for the American Marketing Association What Makes Content Viral? describing how they had used a web crawler to analyse 3 months of articles written on the New York Times news website. Examining results from nearly 7000 articles, the pair came up with some truly startling results. Emotional arousal (a fancy word for high emotional attention) was the single biggest factor in determining whether a campaign went viral. Articles that inspired, caused anger or awe-inspiring emotions, were all far more likely to end up on the ‘most emailed list’ on the site.

Interestingly, even though negative articles actually evoked slightly more email responses than positive ones did, both emotional groupings were dependant on the intensity of arousal resulting from the expressed emotions. In other words, those articles that were either really positive or really negative were more likely to evoke email responses than those which were less positive or less negative - i.e. by extension, less emotive and therefore more aligned to the neutral middle line.

Similar findings resulted from a 2013 study led by Associate Professor of Emerging Media and Communication, Rosanna E Gudagno, which looked at the factors which caused YouTube videos to go viral. Again, in line with the 2010 study referred to above, this research team concluded that a video was much more likely to be shared in cases where it aroused emotions - either positive or negative – in participants. This study also found that videos that resulted in high levels of human emotion had a tendency to be shared, whether participants viewed them positively or negatively mattered little in this regard; what mattered was that they had an overwhelming emotional attachment to the content, one way or the other.

Writing in the Harvard Business Review, Kelsey Libert and Kristin Tynski of Fractl explored the Emotions that Make Marketing Campaigns Go Viral. To understand the best emotional drivers to use in the content they reviewed  30 of the top 100 images of the year from imgur.com as voted on social sharing site Reddit.com. They then  surveyed 60 viewers to find out which emotions each image activated for them classified using Robert Plutchik’s comprehensive Wheel of Emotion. They found that certain specific emotions were common in highly viral content, while others were less common. Emotions that fit into the surprise and anticipation segments of Plutchik’s wheel were overwhelmingly represented as shown below. 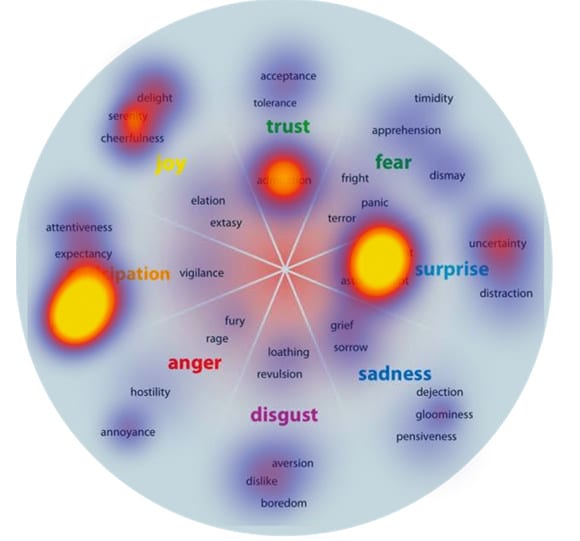 Specifically the research found that these emotions must be provoked to increase impact:

The emotion of admiration was also commonly found in highly shared content, an unexpected result.

How can these principles be applied in practice? Examples include Kony 2012. Even though it's an old campaign, it's still relevant today. Where high levels of negative emotion were used in the first half to engage viewers.... followed by high levels of positive emotion in the second half to create social participation from viewers. Also note that in the study the two videos most likely to be shared were an unknown SNL sketch (which reflects highly positive emotional arousal) and Charlie Bit Me. From a reader's point of view....that they will increase the chance of their online video being shared if they increase the human mind.

Some key takeaways from this article are:

Thanks to Nuala Murphy for sharing their advice and opinions in this post. Nuala Murphy is the Chief Marketing Officer at Adoreboard, a unique platform that tells you how the world feels about your brand online. With10+ years experience in Sales & Marketing across a variety of sectors from manufacturing, medical and most recently in software and digital technology,  Nuala is a Chartered Marketer and board member for CIM Ireland. Nuala’s specialities include Strategic Marketing, Market Research & Analysis, Market Entry & Development, International Strategy Development as well as Brand Architecture & Management.  Nuala has managed several brand and rebrand projects, and has been the driving force behind two award winning digital campaigns in sales and innovation and creative recruitment strategies. You can follow Adoreboard on Twitter at @Adoreboard or LinkedIn.