Campaign of the week: The longest running print ad marketing campaign in history

Sometimes a simple marketing campaign can far outshine a complicated and expensive one. This is the same for more than just marketing campaigns and usually is true across a lot of things in life in general. Simple and effective is more often than not the way to go. Let us see how Absolut vodka did that. 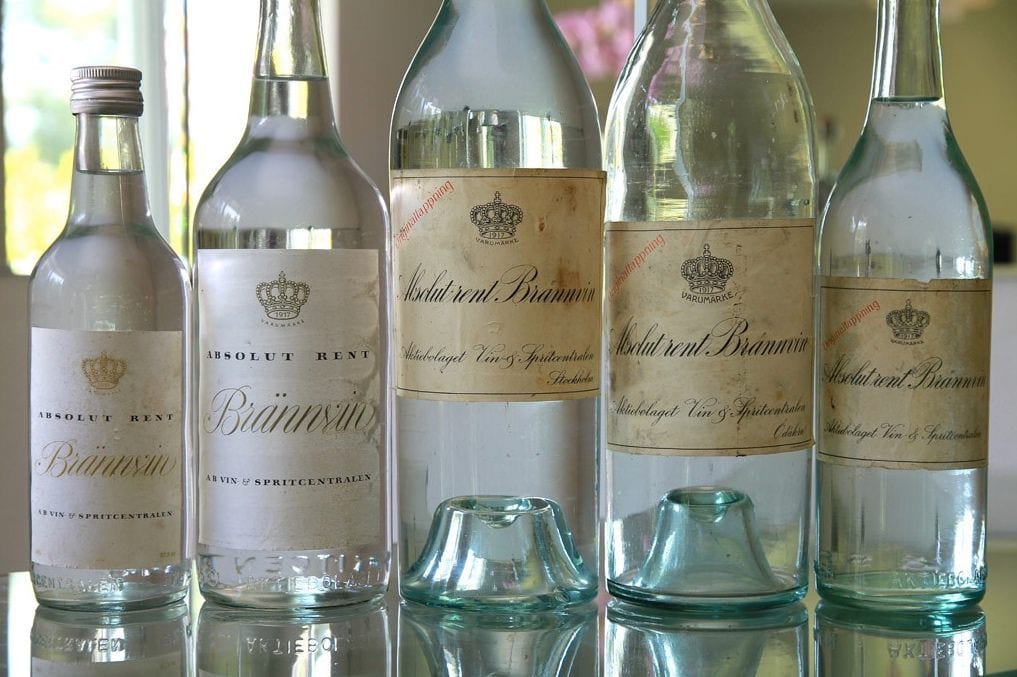 Absolut as a company was founded in 1879 by Lars Olsson Smith and is produced in Åhus, Sweden. He challenged, and beat, the city of Stockholm's liquor marketing monopoly with his vodka. He sold it just outside the city border at a lower price than the monopoly's product. Smith even offered free boat rides to the distillery and "Rent Brännvin" made Smith a fortune. The signs of being different and delivering quality at the same time is rooted in the history of the brand.

In 1917, the Swedish government monopolized the country's alcohol industry. Vodka was then sold nationwide under the name "Absolut Rent Brännvin". The name changed with intervals, and in 1979, the old name Absolut was picked up when the upper-price range ABSOLUT VODKA was introduced.

It was only sold in Sweden for a century before it hit the global market in 1979. At this time they were entering a market which was filled with powerhouses like Smirnoff. It was a bold move and for them to stand out they needed to be different. Part of the difficulty of standing out was the fact they had little to no branding and their bottle design was very understated.

With the branding and bottle design being so simple it was tasked to the company to try an make themselves known to the global market. Shortly before the campaign started, Absolut sought the expertise of consultants, the most important being Gunnar Broman, a well-known adman in Stockholm. Mr. Broman began with nothing—no brand name, no package, not even a vodka.

With an ethos of purity being the main expectancy of their USP, Brooman went to the US with his simple brief.

At a meeting in New York with the top creative team from ad agency N.W. Ayer ABH International, Mr. Broman presented five different concepts for a Swedish vodka. In what would later become a familiar pattern, the suggestion that met with the most extreme reaction—both positive and negative—was "Absolute Pure Vodka." - Adage 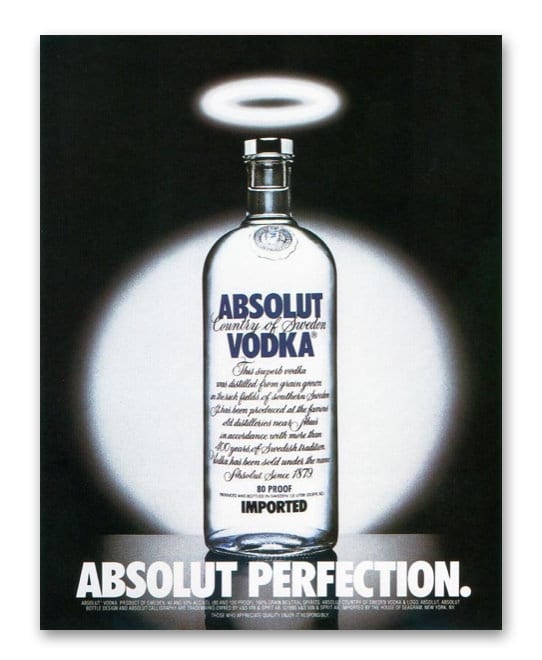 Absolut went out of its way to avoid head-to-head comparisons with rival brands. Instead, the positioning strategy relied on the promise of an entirely new experience.

In 1981, the campaign debuted. It was an idea that took shape – Archimedes style – in the bathtub of TBWA art director Geoff Hayes, and went on to become the longest-running campaign in advertising history. The very first ad, ABSOLUT PERFECTION, established the meme of wrapping visual and verbal puns around simple, striking imagery. 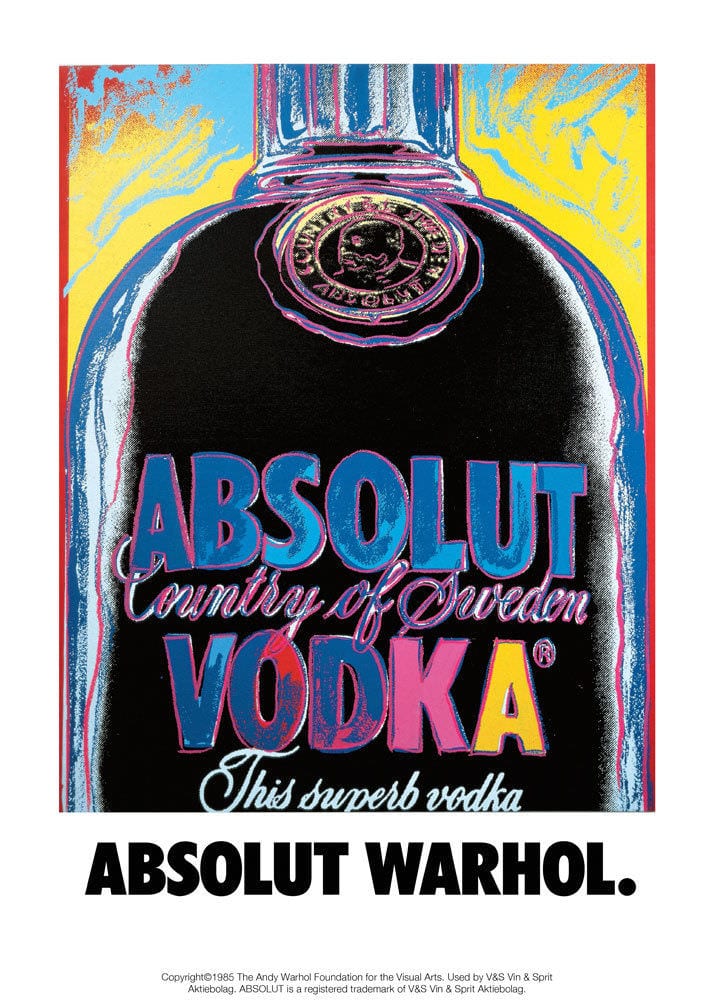 Absolut became an iconic bottle when it piqued the interest of Andy Warhol, who created Absolut’s famous print campaign in 1986. According to the Absolut Book:

“Over dinner one night, Warhol tells Michel [Roux] that he’s enthralled by the artfulness of the Absolut bottle. He reminds him that while he doesn’t drink alcohol, he sometimes uses Absolut as a perfume . . . Warhol proposes painting his own interpretation of the Absolut Vodka bottle . . . When Warhol was finished, [Roux] loved it and thought it would make a great Absolut ad.”

This was it, they knew what they needed to do and how they wanted to do it. The next 25 years would see 1,500 variations of the ad created for the brand and it would take the company global.

With Andy Warhol lighting the spark that would eventually turn into a fire, Absolut explored every avenue of creativity. The idea could be used to get in with current seasonal activities. 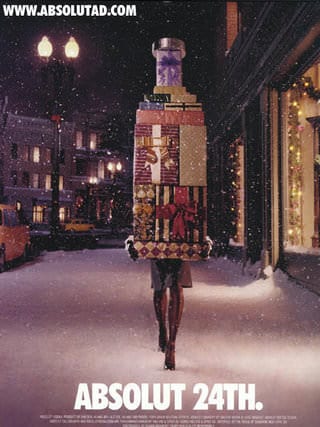 Being linked with things like Christmas only went to resonate with consumers. By being in touch with the human side of life, like friends and family, then you open the door to a consumer brand relationship.

They could position adds in locations and make them fall in line with their surroundings. This ad was created for duty-free in airports. 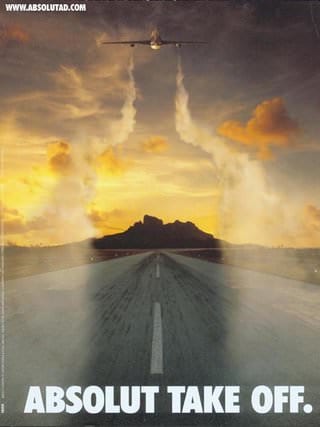 By doing this it kept the consumer in the physical arena they were in and added their brand to it. Duty-free and alcohol are a couple which is always seen together due to the high tax of alcohol within economic zones. Why not buy your favourite bottle before you leave the airport?

They realised they could be part of current events and sporting events. All they needed to do was put it in the shape of the bottle and voila, Absolut is reaching another subsection of their consumers. This is what they did with their World Cup edition. 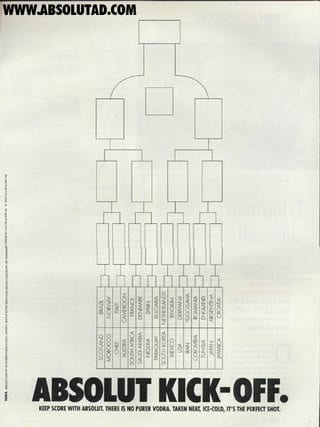 Finally, their most successful and creative campaigns came around a geographical location. This was a masterstroke from Absolut as it made it more personal to people and where they live. If a brand speaks to you personally then you are more like to purchase from them. It has been proven time and again so Absolut was very clever to use this tactic. 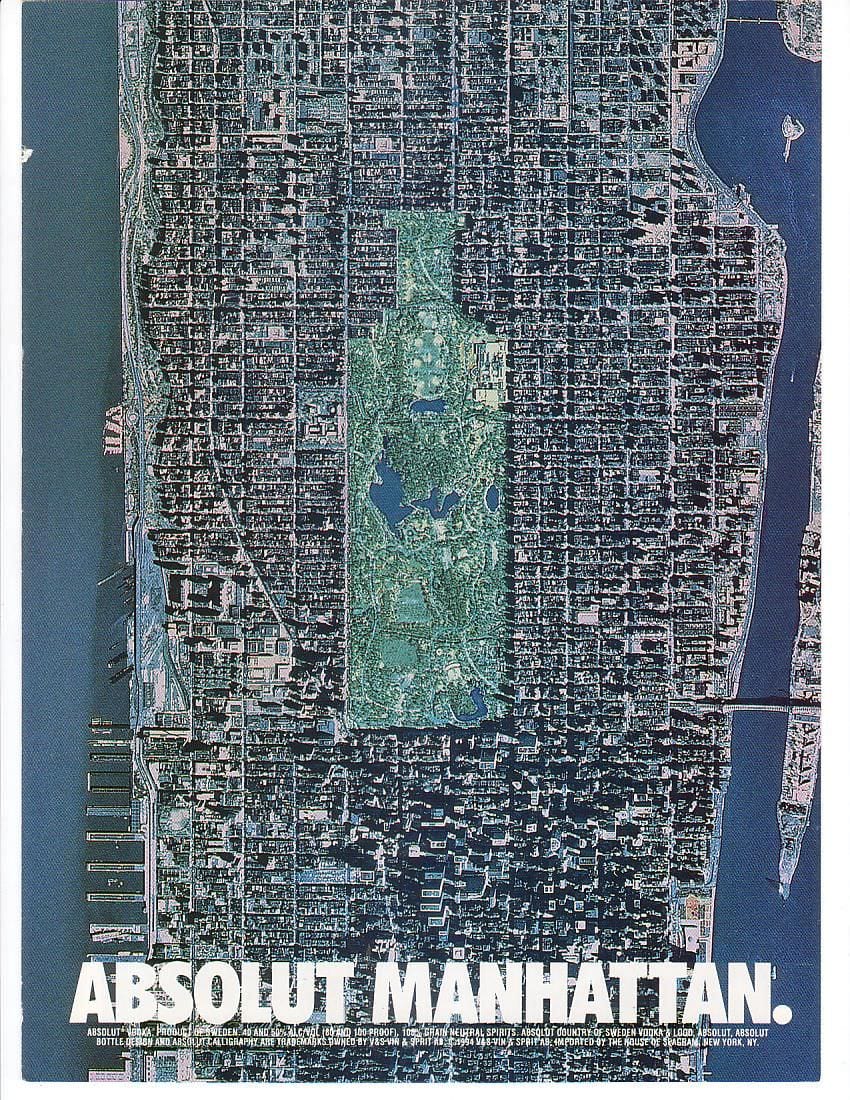 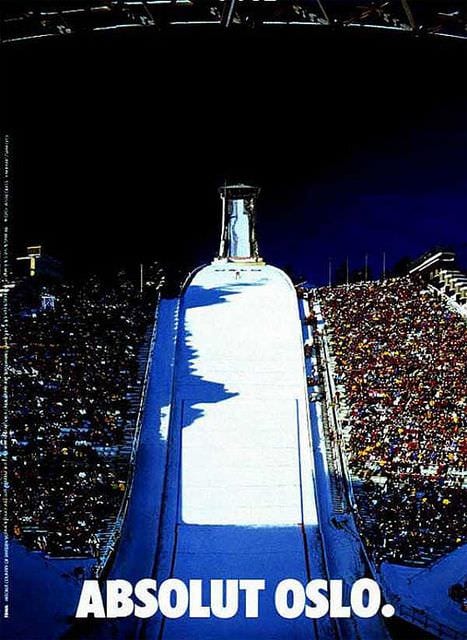 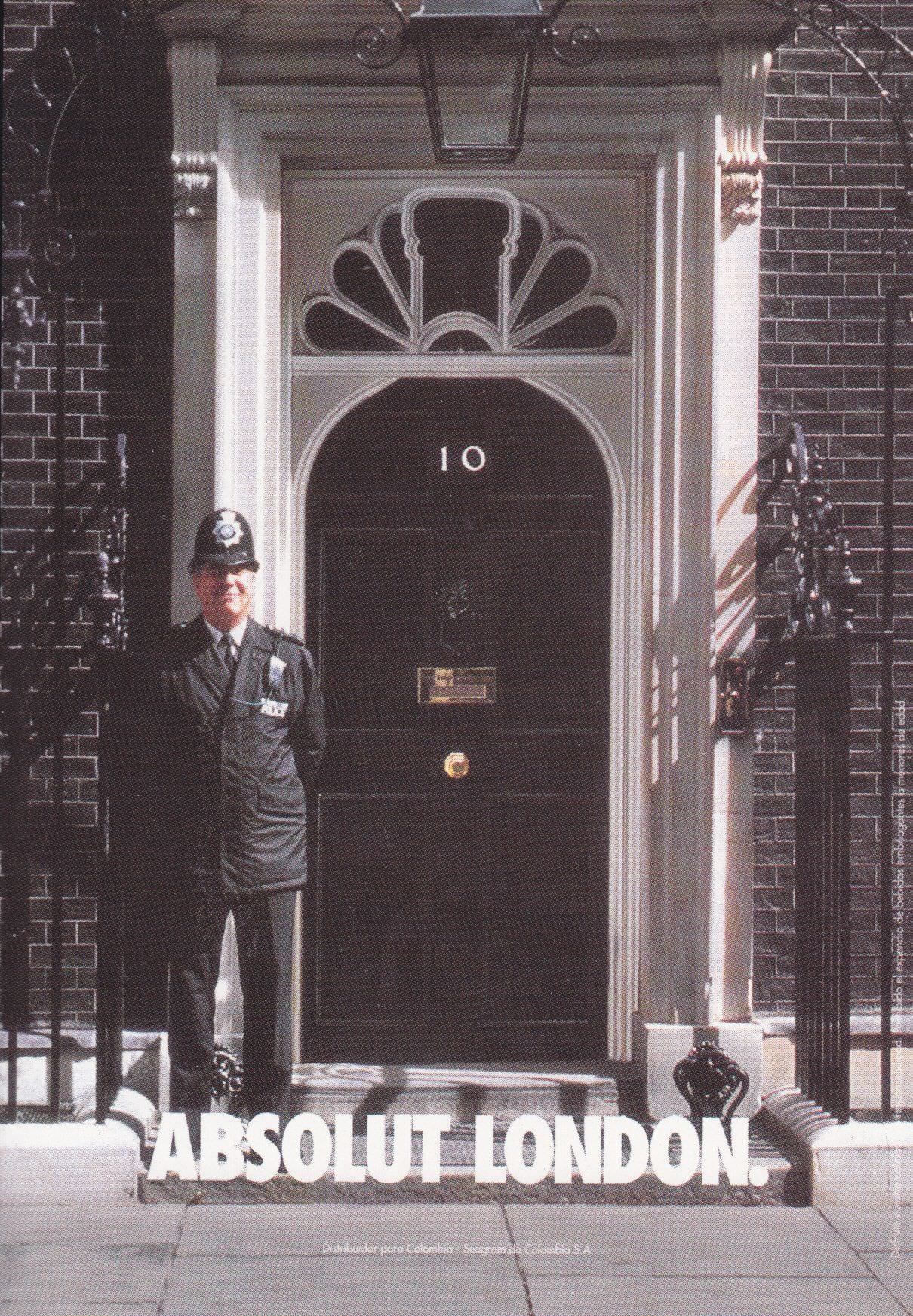 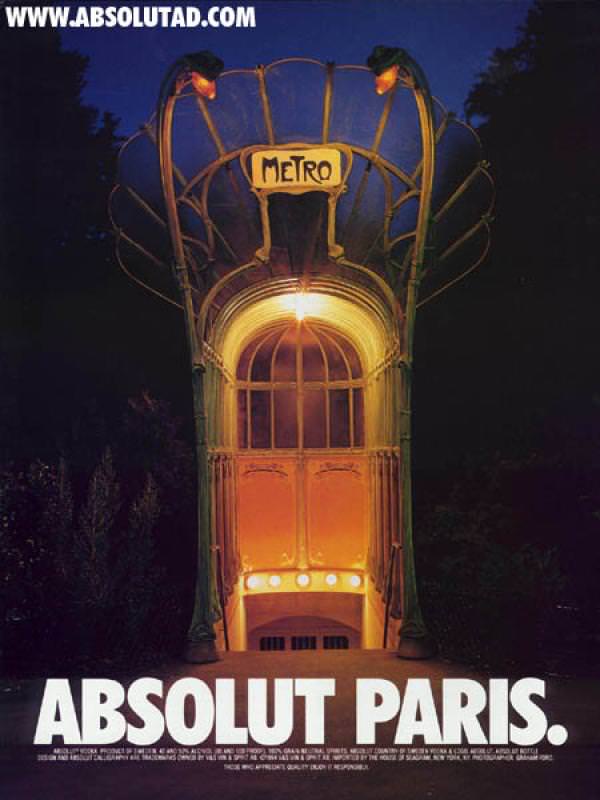 This campaign ran non stop for 25 years and racked up more than 1500 variations. They were used globally and generally focussed locally. This meant that people felt connected, and when people feel connected they're happier to purchase from you.

In the US alone they saw a rise of 10,000 cases sold in 1980 to 4.5million cases in 2000. They made up more than half of the imported brands to the entirety of the US. The company saw a rise in cities around the globe and they did that by making their bottle the star of the show.

“We understand that we’re selling vodka; we’re not selling ads,” explained Richard Lewis, worldwide account representative for TBWAChiatDay, the advertising agency for V&S Vin & Sprit AB, which produces Absolut. “The hero is the bottle. The bottle is the star.” - Wharton University

This campaign did so well because it embodied the values and original USP of the brand. It was pure. 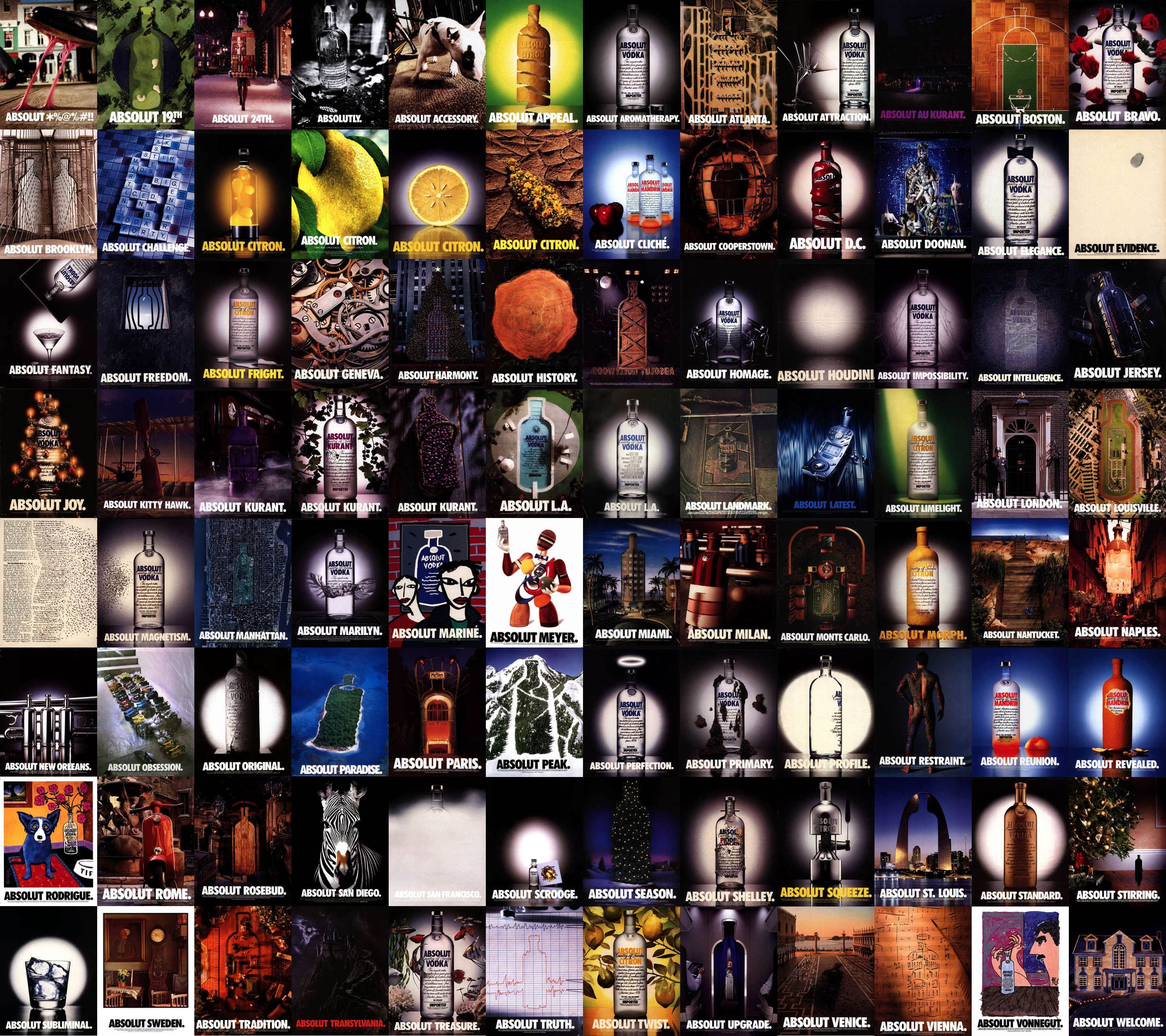