How to adapt to the shift to mobile commerce

For a long time, the rise of mobile marketing has been the darling of tech predictions. Since Mary Meeker, an analyst at Kleiner Perkins Caufield Byers, said in 2008 that "Mobile [will] overtake fixed Internet access by 2014", the world has been waiting for that prediction to hold true. It did, at least by some sources, precisely that same year she said it would.

According to a study by Comcast, in 2014 mobile usage represented 60% of the total time spent online, while desktop-based consumption made up the remaining 40%.

Since the majority of your website visitors come from mobile devices, you need to adapt your digital marketing strategy to take advantage of the power of mobile marketing.

In this article, I will show you 3 reasons why you need to do so and how to adapt to these changes.

Reason #1: Mobile commerce is growing at a fast rate

Mobile commerce isn't just a fancy and futuristic concept anymore, it's a huge opportunity for e-commerce stores that can help boost their growth.

According to Digi-Capital, a research firm, mobile commerce will hit US$700 billion in revenue in 2017, a more than 300% growth over the past four years, when it was worth US$230 billion. Further research made in 2016 by Coupofy says that global mobile commerce now makes up 34% of all e-commerce transactions around the world, and it’s predicted to grow 31% in 2017. That surpasses the growth levels of the e-commerce industry, which is predicted to grow only 15%.

What's more interesting is that Asia represents almost half of the mobile commerce market. Countries like China, UAE, and Turkey have the highest number of mobile shoppers, with 68%, 57% and 53%, respectively, of their total population. Also, the emerging markets with the highest growth rates are India, Taiwan, and Malaysia. On the other hand, the first-world countries with the highest growth rates are Japan, the United Kingdom, and South Korea which have grown 50%, 45%, and 44%, respectively.

Given all this wonderful and promising data, how can you optimize your store for mobile commerce?

There are three main ways, two of which I will explain below, in order of convenience. Creating a mobile version of the site is also an option, but we don't recommend this since it can be worse for SEO than responsive design.

The easiest way to get started with mobile commerce is to optimize your store by using what's called "responsive design". If you have never heard of responsive design before, it's a design standard aimed at adapting websites to be viewed on any screen of any size. Whether you are using a 27-inches screen, or a 5 inches smartphone, you are able to browse on a site without any problems. 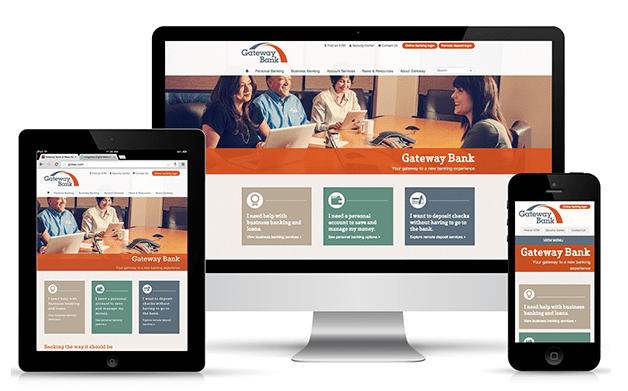 Here’s a sampling of facts from a Google study entitled What Users Want Most From Mobile Sites Today that shows a few more benefits of responsive websites:

Fortunately, every e-commerce platform, including Shopify and BigCommerce, already offer themes with responsive design. You will only have to install these themes, and your store will be ready for mobile commerce.

If, on the other hand, your store uses a custom-made CMS with no responsive design, you will have to have your design team adapt your theme for responsiveness.

You have the option of creating an app for your store, just like most big e-commerce stores do, including Zara, Forever21, and even Amazon.

This approach is similar to tcreating a mobile version of the siet, in the sense that you are creating two different entities with all that entails. The biggest difference, however, is in the process of creating the app.

App development is a whole different game to web development. It's a more expensive, complex, and time-consuming process, which only big companies, like the ones mentioned before, can stomach.

Not only that, there's a study by RetailMeNot that shows how different people behave when faced between an e-commerce app and a website store. This is what they found:

For those reasons, I'd suggest you stay away from this option and focus on the first one, which brings the biggest bang for the buck.

Reason #2: Social commerce is getting easier and more convenient than ever

One of the reasons behind the strong rise in mobile commerce has been tied with the speed in which the difference social media channels have adapted to the changes in the industry. A few years ago, it was hard to imagine that you could make a sale right from your Instagram feed.

Today, however, it’s easier than ever to shop on social channels. Let me show you how the biggest social media channels have optimized their sites for e-commerce.

In order to start selling on Facebook, you have a few different options. The most commonly used is to create a Facebook ads campaign and direct it to your store. Even though that's the most common way to drive traffic to a store, and a very effective way to do so, as Shopify as shown, it's not the same as being able to shop within Facebook.

The shop tab allows for e-commerce stores to add a tab in which they can display their products and sell them straight from their Facebook page. This handy guide by Social Media Examiner will show you how you can install on your own Facebook page.

The buy buttons are a whole different game since they incentivize purchases from the feed itself, which is a much more convenient for mobile users. They still haven't made this option public yet, but it's quite promising for any e-commerce store owner who wants to boost their mobile sales. 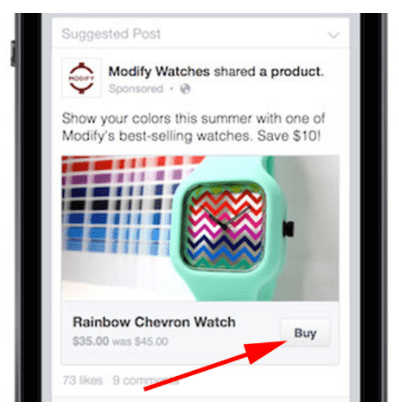 Finally, the Messenger buy buttons allow companies to send them automatic personal messages that suggest them different products. Imagine if a customer visited your store, added a product to their cart and left. By creating a retargeting campaign and using custom audiences, you could contact these people and remind them of the product they left.

Now, people can have Messenger automatically plug in the credit card and address information attached to their Messenger profiles when buying something from a Messenger bot without any need to leave Facebook’s app.

This is another great step from the Palo Alto giant that will make mobile commerce much more convenient.

Instagram has recently launched ads with “Shop Now” buttons. They have tested their program by partnering with 20 US-based retail brands including Kate Spade, JackThreads, and Warby Parker. Since this program is still in beta, they haven't published their results. However, I wouldn't be surprised if the results are incredible once they make this program public.

Even though this option isn't available for all companies yet, there's one company that allows you to optimize your Instagram feed for shopping. 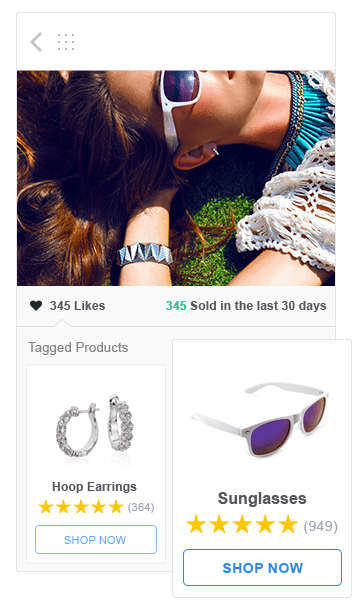 Yotpo, an Israeli-based startup that focuses on user-generated content, allows you to transform your Instagram account into a shoppable feed. Instead of just adding a link to your homepage and hoping for the best, Yotpo allows you to integrate your different products with your Instagram account. When you mention one of your products in your feed, you can make people shop directly from there without having to go to your website and find the product.

A few months ago, Pinterest revealed their “Buyable Pins”. As their name suggest, they allow companies to add a "Buy" button to any pin. Since Pinterest is a visual-driven social media channel, this represents a major opportunity for companies. 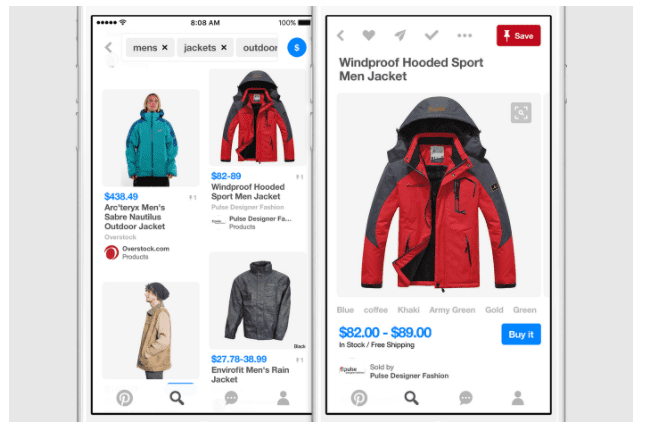 For now, Buyable Pins are available for specific merchants in a beta program. You need to get on the list to be able to use them. Also, you need to use BigCommerce, Magento, IBM Commerce, Shopify and Demandware's e-commerce platform to be selected. Still, Buyable Pins represent a major breakthrough in the e-commerce world.

The Comcast study shown before shown mobile usage surpassed desktop in 2014. This isn't the only study that studies this matter, however. According to another study made by StatCounter in November 2016, this is something that just happened last year. 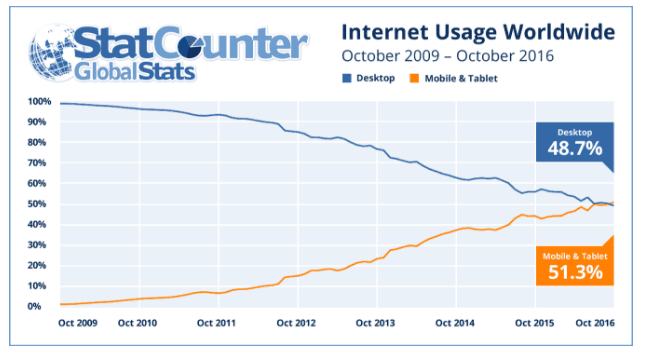 As you can see in the image above, in a seven-year period from October 2009 to October 2016, worldwide mobile and tablet Internet usage went from 0% to 51.3%, surpassing desktop usage by a small margin.

Nonetheless, there are a lot of differences between countries. This same study found that in the UK and US, for example, mobile hasn't surpassed desktop usage yet, while in others, like India and China, it has by a big margin.

This change in content consumption isn't the only important change that has happened. In late 2015, in a study that analyzed $7.8 billion dollars of annualized ad spend, Marin Software found mobile has overtaken desktop for the first time, with more than 50% of budgets spent on mobile ads.

KPCB, the famous venture capital firm that made the great prediction in 2008, made in 2015 another study in which they analyzed how people accessed Internet. Not only they found mobile has surpassed desktop, as they have predicted before, they also found people spend 5.6 hours a day on the Internet. What's surprising from that finding is that from the total time, 2.8 hours were spent on a mobile device. This is a significant increase from 2010 when an average of just 0.4 hours a day was spent on the Internet via mobile device or smartphone. 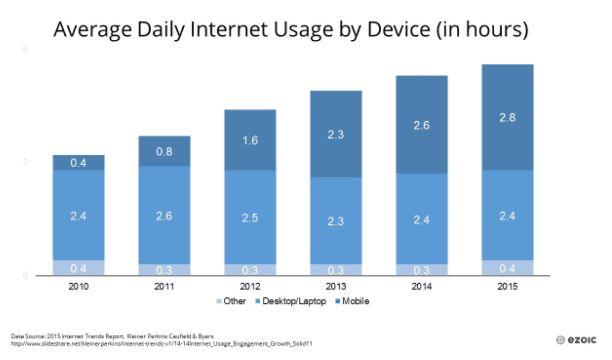 In order to adapt to these incredible changes, you should follow the advice shown before about responsive design, mobile website and apps. This will help your website be ready to take advantage of the fast-paced changes in Internet usage.

Mobile marketing is growing like it has never before. That growth is creating new unparalleled opportunities that any kind of business can take advantage of.

Your business needs to start adapting for mobile commerce, at least if your goal is to sell products or services online. Most importantly, it needs to adapt for mobile visits and usage. This isn't an option anymore, people will expect your website to be ready.

If you adapt to the changes mentioned in this article, your business will be poised to grow in 2017.

Will your business make the changes necessary to grow?

Ivan Kreimer is a freelance content writer that helps SaaS business increase their traffic, leads, and sales. Previously, he worked as an online marketing consultant helping both small and large companies drive more traffic and revenue. You can follow him on Twitter or Facebook

Chart of the week: 77% of online minutes in the UK are spent on mobile, showing that mobile-optimized marketing really is a must The amount of time people are spending online is on the rise, with most opting to access …..

Statistics on consumer mobile usage and adoption to inform your mobile marketing strategy mobile site design and app development “Mobile to overtake fixed Internet access by 2014” was the huge headline summarizing the bold prediction from 2008 by Mary Meeker, …..

There are many technologies that are set to impact the mobile app development industry in 2020, let’s take a look at some of the biggest trends In an era when the world is heading towards digitalization, mobile apps are gaining …..