Blockchain has been a hot topic in the tech world ever since Bitcoins emerged from obscurity to become the obsession of nerds the world over around 2013. Marketers love finding shiny new technologies to distract them from their day jobs and have enjoyed hopping on bandwagons to prove their down with the latest trends ever since some bright spark realized that newfangled printing press things could be used to churn out flyers to promote the latest in powdered wigs and ruffs.

But whilst marketers have been all over other trends, such as the growth of Snapchat or Live video, like a rash, they've yet to properly 'get' what the blockchain can actually do for them.

I think this is in large part down to two key reasons:

So using those two assumptions about why marketers have struggled to understand and embrace blockchain technology, this post will try to tackle both, in turn - first by explaining blockchain in simple terms to make it easy to understand, and then by introducing all the fabulously interesting uses for blockchain that have nothing to do with bitcoin. If you already know your hashes from your decentralized ledgers than skip the first bit and head straight to the second .

As Einstien said- 'Everything Should Be Made as Simple as Possible, But Not Simpler'. Blockchain is a complicated beast, but it's the essential principles can be simplified. Essentially it means everyone stores a record (like a transaction) rather than just a central authority (like a bank). Everyone's records are synchronized, and no one can game the system because everyone's records have to match. If I changed my blockchain to say you'd paid me £200, then the system wouldn't allow it, because my records wouldn't match with everyone else. This, in essence, is what makes blockchain 'unhackable'.

This diagram helps explain how it works: 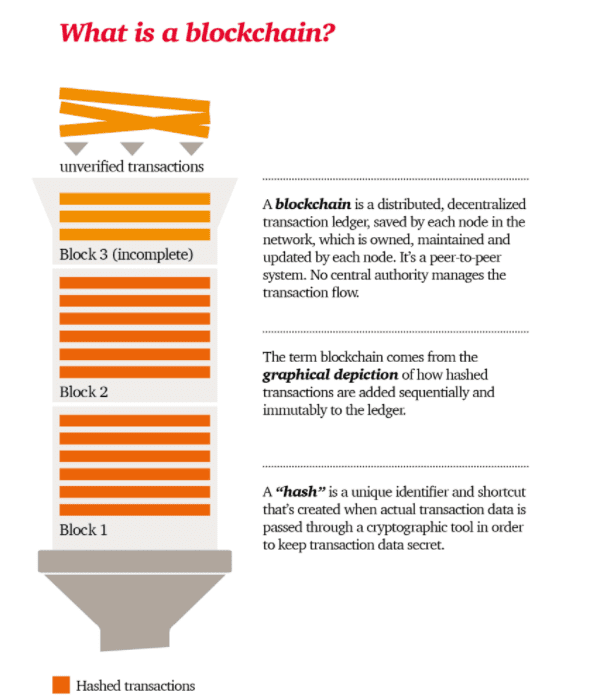 So what makes blockchain so great? It means we can extend trust without the need for a central authority. This sounds like a fairly academic point, but trust is actually the foundation of the entire digital economy (and the physical economy for that matter) and the companies that currently exist as central authorities stand to be massively disrupted by blockchain.

Money itself is trust. A unit of currency is a trust token. A coin has value because you trust that other people will accept it in return for goods or services, and the institution that protects that trust is the central bank. If you thought no one had any faith in your coins and notes, then you'd stop using them pretty sharpish, and find something people did trust the value of.

The implications of Blockchain for Digital Marketing

There are many areas of the digital economy where we need to turn to a central authority to ensure trust. A great example is programmatic ads. If a random website you never heard of said 'put your ad on my site, it'll get seen by millions of people', would you trust them? Nope, me neither. You have no way of knowing they'd be telling the truth about the number of people viewing it. And even if you a built a system whereby you measured the number of views of the ad yourself rather than trusting the host, you still wouldn't know if those views were real people or just bots put on the page by the owner to crank up the view counts and make them money.

This need for trust has led to the success of central authorities in the digital advertising world which can be the arbiter of rules which work to ensure trust.

The most successful of these central authorities are Google and Facebook. Google makes well over four billion dollars a year from it's Google Display Network. This is where Google acts as a middleman between website owners who have traffic and advertisers who want clicks to their site. 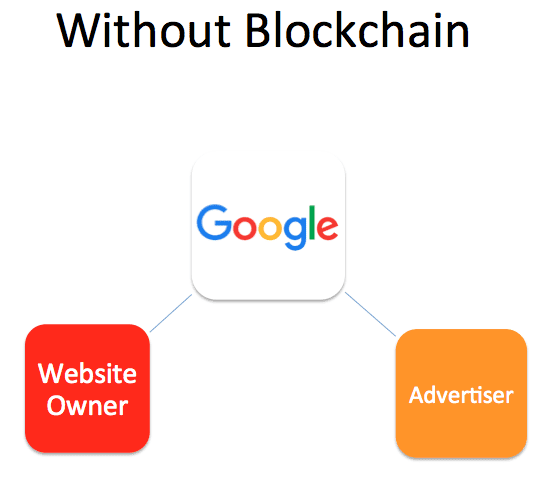 If they trusted each other, the advertiser and the site wouldn't need Google as an intermediary taking a share of the profits. But they don't because without Google acting as a trustworthy central authority, the advertiser can never trust the website owner not to be using dubious tactics to boost its own revenue at the expense of the advertiser. 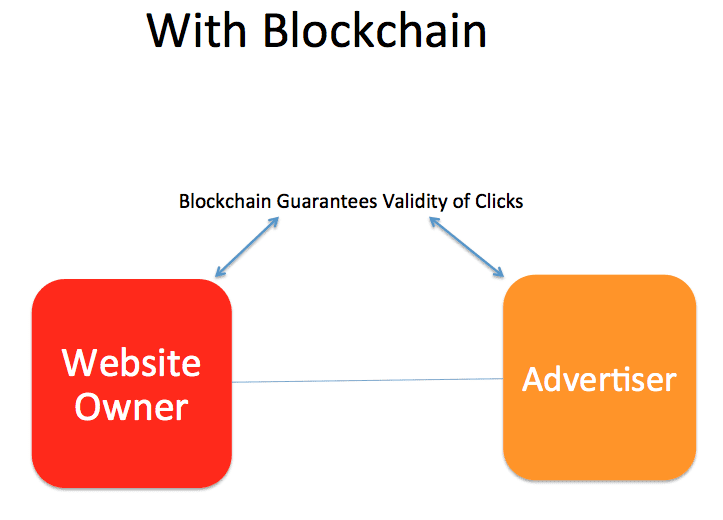 So now you can start to see the massive implications blockchain has for the world of digital marketing. There's probably no bigger threat to Google's revenue than the blockchain. It represents the same kind of threat to big tech giants as bitcoin does to big banks. Let's be clear though, this is good news for advertisers and site owners. They get to keep more of the revenue for themselves and won't have to pay a third party in future.

The distributed ledger that is the blockchain isn't just able to keep a 'un-hackable' record of transactions. It's also able to keep a 'unhackable' record of people's digital signature- that is, who they are. This means people will be able to prove they're a real person in a way that doesn't involve giving away personal details that could be subject to data breaches. This kind of technology has already been developed, and it's just a matter of time before its use becomes more widespread. Microsoft is already working on building it's own blockchain based digital identification system, and other tech giants are sure to see the potential of integrating it into their own systems to prevent many types of online fraud.

This will allow for much greater scrutiny of who is clicking on ads and who is seeing ads.

Ad Fraud is endemic and a huge problem. It cost advertisers over 7 billion dollars in 2017. Solving it would boost the cumulative effectiveness of online ads by 7 billion dollars. Advertisers seeing better returns thanks to the defeat of ad fraud, and not having to pay middlemen like Google would mean higher ROI and higher profits. That, in turn, means they'd be willing to invest more money in digital advertising, which would be yet more good news for digital marketers. Provided you've been playing by the rules are not inflating your views with bots of course!

At current all transactions online need to be processed by a third party, like Paypal, Stripe or Worldpay. These businesses need to cover costs like server infrastructure, staff, and marketing. On top of this, they make a profit. They do this by charging a fee for each transaction. For pretty much all of today's purchases, these fees are very reasonable. If you buy a watch or a dress or a fridge online, the fee paid to clear the transaction with the third party will only be a minuscule part of the overall cost of the object, so it doesn't prevent the purchases.

But with the blockchain you can transfer any amount of money (in digital currency), no matter how small, at no cost whatsoever, because there is no third party having to pay for servers and staff and marketing. All the transactions are stored in the blockchain, which is distributed across all users devices.

This means no payment fees whatsoever, which opens up the possibility of microtransactions which could create a whole new revenue model for various publishing sites.

How much would you pay for a web page without ads? £1 - nah. 1p, nah. 0.5p, maybe? How about 0.1p. Now you are talking. Without blockchain, these kinds of tiny payments just wouldn't make sense, because transaction fees with the third party would be higher than the revenues from each transaction. But with the instant and free transactions offered by blockchain then it starts to make sense.

You could be faced with a little pop up in the corner of publishing sites which says something like 'want to view our content ad-free?- just click here to pay 0.1p per page you view'. Or you could have sites that are only available to fee payers, but the fees of less than a penny per page view would be low enough that it wouldn't put people off in the way it does to web users currently.

Publishers shifting to this kind of revenue model will mean the supply of web properties offering ad space will decrease (or increase slower than it would), but as demand from advertisers for ad space will remain the same, ad prices will increase. This will mean microtransaction supported sites will, in turn, be good for ad revenue based sites, as they'll be able in to increase their cost per click.

If you're interested in learning more about how blockchain will disrupt existing industries and transform the global economy for the better, I can't recommend this recent TED talk on the subject enough.