Our summary of Google Analytics updates 2011

This update page is intended to help anyone who uses Google Analytics, but not day-in day-out! It's also a reminder for me when giving training courses to highlight what's new.

I subscribe to the Google Analytics Blog feed to keep up-to-date and other related ones like Webmaster Tools. There are quite a few detailed posts from Google about Analytics that won't make so much difference to most users and are more for interest of GA specialists working on it all the time.

So in this summary we alert you to what we see as the major changes that every marketer using Google Analytics to review their digital marketing needs to know about - there's been a lot of them in 2011. Many thanks to the analysts like Dan Barker, Helen Birch and Tim Leighton Boyce who have written tutorials on how to apply these new features which often don't have any tutorials from Google when they're introduced.

Another short update on this since it's going to effect the accuracy of your analysis. There are two posts we recommend:

Google giveth with one hand and take away with the others - although many loved the new search queries feature from earlier in October there is a furore amongst SEOs that Google will not be sending natural search query information from logged in users to any analytics package. Although this is estimated to be sub 10% it will make approaches like gap analysis less accurate. Much of the annoyance is based around the queries still being available for paid Adwords users. Bit of a storm in a tea cup or not? Hopefully Google will revert on this decision.

There is discussion across many forums about the impact on smaller sites, but one of the best summaries of the impact on major sites is this from the bigmouthmedia blog. Note this is for Google US at the moment and there is no announcement from Google when it will be rolled out further.

"Not provided" refers to when the individual search keywords can't be viewed in analytics although they are still registered as natural search visits. It clearly makes techniques like backlink analysis less meaningful although relative differences in phrases are still relevant.

Yet another new feature in the new version of Google Analytics has been announced. It's a more sophisticated version of the navigation summary. It shows page flow and flow between goals/funnel steps. It's not rolled out yet, but Dan Barker has said he will do a summary when he explores it once it does: 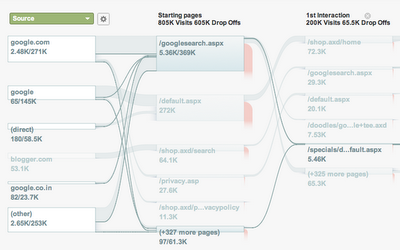 You can see it enables you to review customer journeys and these can be segmented for more insight.

Our update by Dan Barker explained how this feature, previously seen in Google Webmaster Tools can help you work out which natural keyphrases and landing pages give the most opportunity to improve natural search.

At the same time as GA Premium, a major new feature was also introduced. GA Real Time is a new set of reports showing the source, content used and select keywords for current / active users on the site within the last 30 minutes.

This report opens new opportunities - read this review of 5 applications by Helen Birch. 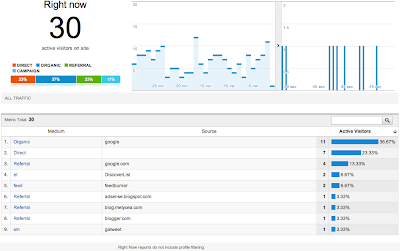 The cost of GA Premium (stated at $150K minimum) means that it won't be relevant for most businesses except corporates looking for support from Google Account managers and improvements to sampling.

On Thursday 11th last week Google Analytics notified a change it described as "a small change in how sessions are calculated in Google Analytics". They said it should only give changes to visits of around 1%.

We're alerting this to you in case you see larger changes when reviewing your analytics or differences between GA and other tracking systems.

For the record, the change seems to have been made to accomodate the new multi-channel features (media attribution path to purchase funnels). Since when any traffic source value for the user changes this is counted as a new visit.

You can read the announcement details here.

With the launch of Google+ there wasn't so much attention given to this release which enables you to report on Google+ shares and also Facebook and Twitter using data obtained from their APIs using the social media plugin. This is a big enhancement since the lack of reporting of social media reporting without event tracking was a weakness in Google Analytics.

The new release also enables you to see the impact of Google+1 within Analytics.

A great introduction by Tim Leighton Boyce explains how you can apply this to understand multiple customer touchpoints before conversion. Previously, this has required separate, more sophisticated systems.

Our commentary: You may have missed this announcement over the Easter break that all users of Google Analytics can now try the new version without signing up for the best programme.

If you get confused by the new report menus checkout this handy Report Finder from Google for the New version.

For an in-depth review of the new capabilities, see our detailed analysis on 10 key features in the Google Analytics Beta from Dan Barker or my recommendations below for organisations using GA on when and how they should switch.

It's also worth checking the Google Analytics Blog which has a series of posts on the new features, so far covering:

Our commentary: Well, this is certainly a major update - the first major enhancement to the Google Analytics interface since May 2007. The public beta of Google Analytics v5 was announced a couple of weeks ago and we applied for Beta access. It's just been enabled for Chris and I today and I've heard quite a few contacts on Twitter have access now also. Although I'm also hearing some frustrated analysts who haven't yet got access to it.

I'll give my first impressions here and review the implications for marketers, but Dan Barker has a detailed analysis on 10 features in the Google Analytics Beta to consider.

Here's how the top navigation has changed - you can see the emphasis on custom reports, intelligence and the advanced segments have more emphasis. 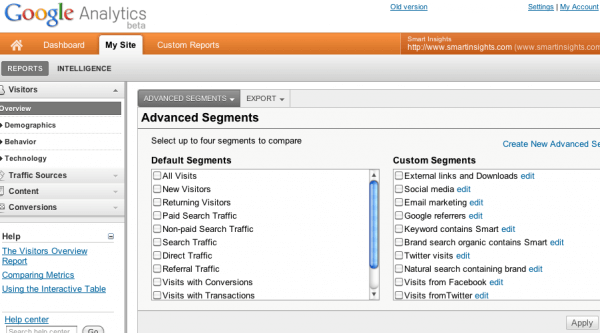 2.  Application workflow. Google's design team has considered the user journeys and have made some features more prominent to encourage usage - as i've been doing in my workshops for Econsultancy:

3. Menu changes for accessing reports. As this screengrab from Dan's post shows, these are dramatically different. So in a larger company, there is a need for retraining to understand these. The changes do seem logical and simplify, but i have heard some Beta users saying they have reverted to the previous version.

4. Dashboard gadgets and widgets. Apart from the changes to the menus, the second biggest difference is the addition of  widgets and gadgets to help develop custom dashboard widgets. This was a strength of other web analytics tools like Yahoo! Web Analytics, Core metrics  and Omniture. Now this deficiency has been addressed, this makes Google Analytics more suitable for enterprise use. However, the data can't be filtered I think as it can in the other tools for a specific segment or condition so this remains a limitation.

5. Data / report type changes. You may be wondering whether there are new types of data or reports. There are no new data types I believe, just re-labelling of reports.  The data that is available is the same, although Google have announced separately that they have dropped the connection speed feature.

Currently, there are no Benchmark reports in the Beta. Google have announced separately that they are improving these. It seems there was no time to include them in this version of the Beta, so we will let you know how these change.

6. Guidance on using the reports to improve marketing results. As someone who trains on using Google Analytics reports to get better results, I was interested to see whether this type of guidance would be built in. Well, no changes here, you still have to know the right questions to ask and where to go to find the answers. So I'm pleased there are still opportunities to help through training and consulting.

Overall though it will be much quicker and clearer to identify opportunities and problems, so the new release is a major step forward!

Our commentary: You can now associate your Google Webmaster Tools with your Analytics accounts. You do this from the profile page by clicking on the down arrow for the relevant site.

This sounds useful, but in reality it's just cross-links that are set up - so my advice would be it's not something to bother with for now.

I'm sure some SEOs will read something into this assocation and advise not to since Google will use your GA data as a ranking signal - but they have always publicly said they wouldn't...

Marketing implications: This is a small evolution in capability, but I mention it as it shows the trend to integrating different data sources.