The rise and rise of mobile email marketing

Comscore have released an intriguingly titled report Digital Omnivores: How Tablets, Smartphones and Connected Devices are Changing U.S. Digital Media Consumption Habits. This adds to data presented below from earlier on mobile usage of email.

Although the report title references the US, there's also data from elsewhere in the World too. In fact this is one of the main insights from the report. This is an in-depth report which is worth downloading if you're working on a mobile marketing strategy. These were the 3 main highlights for me:

1. The importance of mobile (and tablet) access to email and web will vary dramatically by country.

I included this chart since as well as showing the country differences, it also shows the breakdown between mobile and tablet which is the majority of the darker "non-computer device traffic" shown here. Tablet is around a third of all wireless access in some countries and other charts in the report 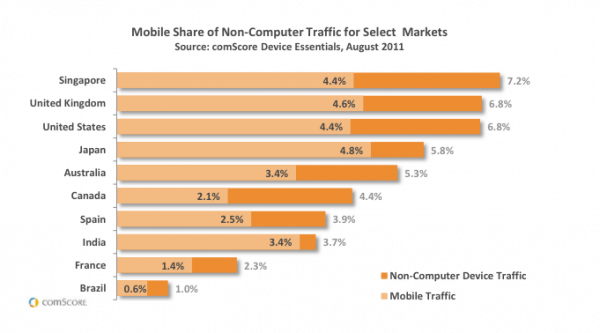 2. Mobile devices are now the predominant web access devices for big chunks of the day

This day-parting chart does refer to news sites, but it's a great indication of when mobile devices are used. Access levels aren't that far behind during the day either.

3. Messaging (email and social) are the primary mobile activities

No surprises here, but this chart shows that reading email on their phone is near daily for many. 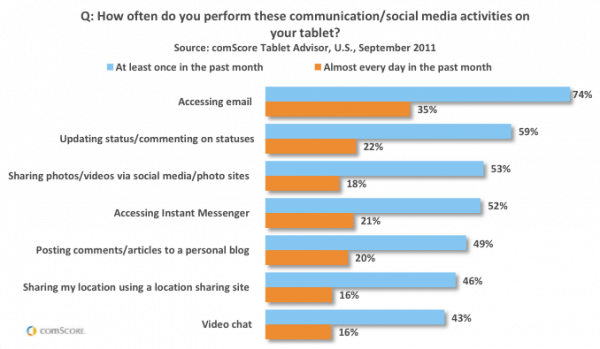 Thanks to Mark Brownlow to alerting us to this via Twitter. As Mark says "However you measure it, mobile email is growing fast".  I thought I'd share the chart since it persuasively makes the case that your email design should work on mobile and you should think about what you're trying achieve through the communications - creating awareness and encouraging later action become more important.

The source of the data is Sydney-based Email Service provider Campaign Monitor - it's based on 3 billion emails delivered for it's clients in 2011. The Comscore report mentioned earlier in this post also covers this topic:

There's a clear message here - iOS dominates, so ensure your email renders well within Apple Mail as well as the 3 usual suspects: Hotmail,Yahoo!Mail and GMail. See all Email client statistics.

How do these figures compare to what you're seeing in your analytics?