By Expert commentator 29 May, 2013
Essential

The Truth about Video Email Marketing

Look in your email inbox, and on any given day you’re likely to find several emails that feature videos. They can range from informational, educational to simply entertaining. But what is all the fuss about? Does video email marketing really lift response rates? Can anyone use video in their email marketing? What are the best tactics (or best practices for that matter)? Let’s find out!. 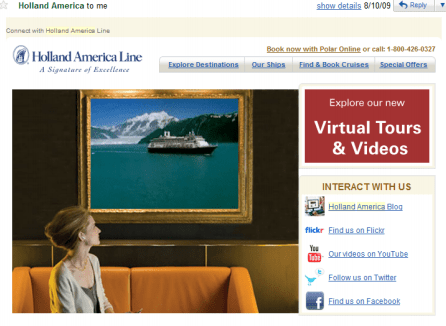 Depending on your budget, several options exist for creating videos in emails:

The video featured in this Williams-Sonoma email demonstrates how to use a product (and clearly labels it as such):

Cosmetics retailer Obagi creates continuity in its emails with a video series that touches the emotions, sharing one woman’s struggle with acne and how she overcame it – in time for her wedding by using Obagi products.

No matter what format you choose, if you decide to take the plunge, you should follow these best practices for video in emails:

The key takeaway to using videos is email

You have to decide whether video in email is right for your brand, your subscribers, and your budget. Video can add a personal element (such as a message from the president), it makes your emails more interactive/engaging, and it can be repurposed for other channels, such as YouTube and social sharing sites.

If fear of the unknown is holding you back, many resources are available to guide you through the process. A few factors to consider before selecting an email video provider include video quality, video storage capacity, mobile video recording and mobile playback.

Thanks to Scott Hardigree for sharing his advice and opinions in this post. Scott is the Founder of Indiemark, Co-founder of BrightSpeed and Editor of Email Critic. You can connect with him everywhere across social media.