A case study of re-activation of lapsed customers with Marketing Automation and Gamification: An email marketing case study from CarDelMar

The well-known marketing rule that investing in acquisition of new customers is six to seven times costlier than re-activating past customers suggests the value of investing in reactivation campaigns. In the omnichannel world we live in,  a wide range of possible methods are available to re-engage those who have lapsed, or if you prefer, are 'churned' buyers. Among the most effective methods is surely re-activation by email marketing. In this case study we present how optivo helped the German online car hire broker CarDelMar with an automated reactivation campaign, which was designed and carried out using the software of email marketing service provider optivo.

The challenge of inactivity

Previously, CarDelMar had been sending out fortnightly newsletters with information on exclusive discount campaigns, useful tips on booking reservations and introductions of new rental agencies. As is usually the case with new relationships, the beginning is "all roses". Subscribers are excited about pretty much anything that was sent their way and the opening and click-through rates are correspondingly satisfying. But the honeymoon period is soon over, the spark is gone and the interest begins to wane. More and more subscribers simply stopped opening the newsletter after some months of subscription. Sounds familiar? This is a rather common occurrence in the email marketing industry; the opens naturally trail off and clicks fade away over time. However, with a well thought-out re-activation strategy you can prevent growing apart from your customers and remind them again that you are truly unique.

An automated project with a conceptual approach

The main objective for the project was to re-engage no longer active subscribers. We developed a campaign with three main areas of focus, that is: visibility of the campaign in the inbox, a multilevel approach and some attractive content. The resulting idea was a multilevel gamified campaign that picked up on the company’s slogan “Compare Cheap Car Hire Worldwide” and is called “CarDelMar world-tour”. In this case subscribers are invited to choose one of three continents to travel to. After choosing the continent of choice, the subscriber sees a photo of a tourist attraction and has to guess which city it is located in. 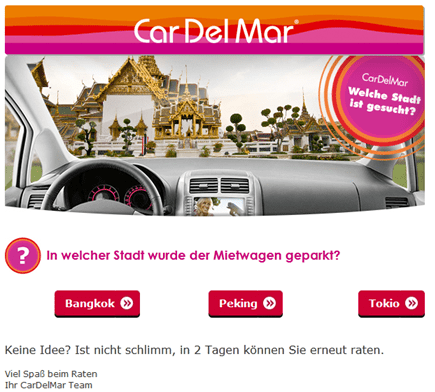 Sprucing up the campaign with the mechanics of fun

Strategically implemented game mechanics can help to engage both enthusiastic and even passive subscribers better. The concept of adding some fun to communications in order to grow user interaction of course is not new, but the idea of “gamification” takes reward-based engagement to a higher level. Ideally, a nice incentive is included, to make your customers’ efforts worthwhile. CarDelMar’s reward for correctly guessing the city the car is travelling through, was a chance to win a free car rental for one week – an attractive prize, which ensures a higher likelihood of customer engagement.

A multilevel approach for optimal results

The car hire broker’s campaign includes altogether seven mailings, depending on the reaction of the subscriber as well as automatically sent reminders, follow-up mails and a confirmation mail for the participation in the sweepstake for the free car rental. That way you can assure that the subscriber will notice not only the game-related mailings but also the following regular newsletters.

CarDelMar managed to run a highly targeted and automated campaign parallel to regular communication. A five month inactivity period can be used to switch the subscriber from receiving regular communication to receiving the re-activation campaign. Thanks to transaction emails and target groups the only effort that needs to be done is to regularly announce a winner of the prize, everything else runs automatically.

The re-activation campaign from CarDelMar proved to be a success right from the start: With the correct approach, a clever email marketing software and the right incentive, CarDelMar was able to reactivate 7% of all initially inactive subscribers. Furthermore, the gamification emails achieved an opening rate of up to 62%, which shows the effectively implemented playful component, the value of using an attractive incentive and the effect of a multilevel approach.

Kristina Sievers’, Online Marketing Manager at CarDelMar, commented on the successful campaign saying: “We are very pleased to have been able to re-engage so many inactive recipients using an automated re-activation campaign. optivo provided us with first-rate support, in the form of the crucial and precisely tailored marketing automation software.”

Besides achieving remarkable results in numbers, CarDelMar’s campaign also attracted attention from the renowned US-based marketing research firm MarketingSherpa. They awarded it with the top prize in the category “Build and Cleanse-Ecommerce” as part of the prestigious “MarketingSherpa Email Award”.

Thanks to Ulf Richter for sharing their advice and opinions in this post. Ulf is co-founder of email marketing software provider optivo and is responsible for the divisions Sales, Marketing, Support and International. He founded optivo together with Peter Romianowski in 2001. Stints at multimedia service provider Aperto and Bertelsmann also count among his previous professional experience. You can follow optivo on Twitter or LinkedIn.