The world of ecommerce seemed to go through a more major mainstream media awakening in 2012 with most focus being on the bearing of fruit of mobile commerce which finally proved, then exceeded longstanding hopes.

In 2013 we can expect to see a rush of retailers attempting to get ‘mobile’ to try and capitalize on the mobile revenue stream. SME and enterprise level retailers will most likely opt for mobile optimisation of existing sites through third party solutions such as Mobify, with only the larger retailers or retailers with a very specific tactical reason opting to go native with apps. See the recording or slide deck of the Smart Insights webcast by mobile specialist Rob Thurner on mobile priorities for 2013.

This recent data from network Affiliate Window across their range of UK retail clients shows the growing importance of handset sales - useful for benchmarking your mobile sales against. Note that desktop is on the left axis and still 72% of sales on Christmas day, when mobile device sales (right axis) peaked with 28% of total. 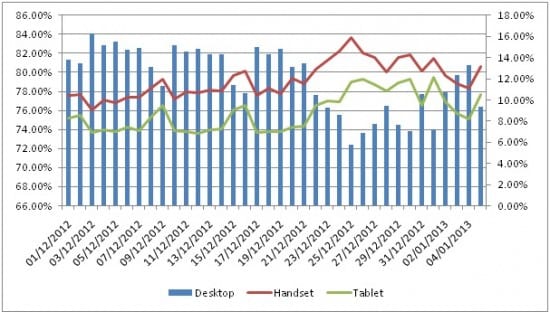 The 2012 ecommerce landscape was also a tough one commercially, with even many experienced online retailers finding it more difficult than before to reach growth targets based on adoption of the channel. They were up against more online competitors, greater pressure for the levelling of international offerings and greater price sensitivity from frugal online shoppers. That said there was a continuation of the growth trend we have seen over the past 10 years or more highlighted by this IMRG data. 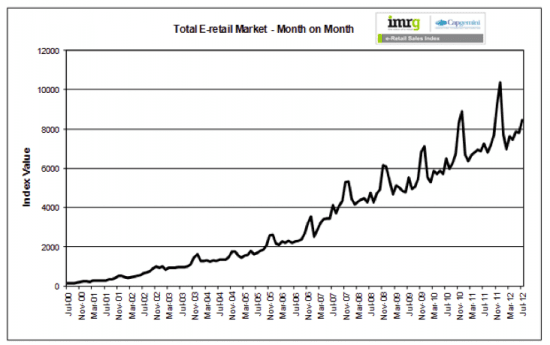 Channel Advisor recently reported on interesting month-by-month variation in online growth indicated by same-store-sales (SSS) levels. If you're working in retail it's worth comparing your online sales trends to Amazon and eBay as bellwethers of consumer spending. 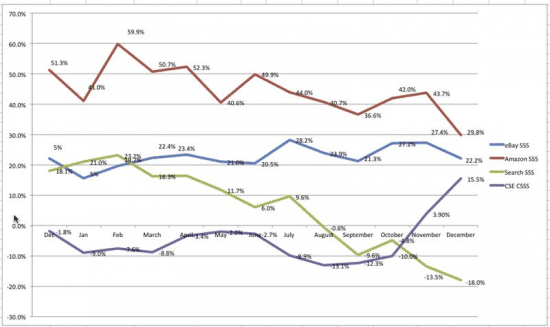 This data seems to suggest December was sluggish compared to the previous year before.

Channel Advisor also points out that Search was down 18% as it continued to suffer the new paid from Google Shopping / Product Listing Ads (PLAs) click cannibalization with the importance of Comparison Shopping Engines (CSEs) increasing.

Renewed focus on customer retention and loyalty in 2013

But with more difficulties of achieving growth, many online retailers were looking carefully at their forecasts and strategies for future growth given the Economic conditions In many cases I am seeing a re-emergence of priorities focused on customer retention and loyalty for 2013.

So, I believe we are likely to see greater focus on and usage of personalisation, greater CRM integration, retargeting and customer service based retail technologies such as loyalty programs, online chat initiatives and customer rewards to try to encourage existing customers back into their arms.

There are some good UK retail examples of companies maintaining online growth. 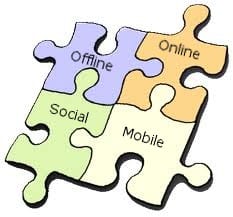 But to keep track of all of these channels, we need analytics- and not just basic analytics. We’re talking sophisticated tagging and attribution modeling software. Therefore we are likely to see companies such as Google and their Multi Channel funnels at the lower end and TagMan or Quibit at the higher end introducing more sophistication.

I expect use of attribution modelling to grow in 2013 as more and more small and mid-size retailers particular start to realize that they need to be aware of how their audience interacts across ALL of their media channels and the value of knowing about all campaign touch points.

Off all of the trends however, I feel that the greatest push will be in ‘joining up’ online to offline technologies (and vice versa). We will see online strategies emerge to support offline store trade in a response to the downward trend of high street retail revenues. There will be much greater focus on meeting the lifestyle needs and demands of the consumer and the bridging of the online offline commerce gap.

Already we are seeing the likes of Walmart innovate their offline store formats to accommodate demand along with varying the standard click and collect model to a buy online today from a specific store and pick up immediately.

2013 looks set to be an interesting year in ecommerce!

Jill Robb is the Smart Insights Expert commentator advising on more effective Ecommerce approaches. Jill is the CMO of Origin Digital, a Creative Digital Agency based in Belfast. Jill is also an Associate Lecturer at Ulster University on Digital Marketing and Communications. With a vast array of experience in retail, both online and offline, Jill's approach to online marketing is both refreshingly energetic and commercially astute. Jill is a regular speaker on topics such as search engine marketing and ecommerce and a contributor to business magazines both in the UK and Ireland. Connect with Jill on Twitter or LinkedIn.