Most companies are doing nothing to re-activate abandoned carts

A 12-month survey for 2016 conducted by ecommerce recovery specialists Optilead has identified that 81% of online abandonment is totally ignored. This means that in the tests, valued at £2.1m, a staggering £1.7m of abandoned transactions were not followed up.

Over the past few years, online sales have increased in the UK in excess of 10% per year – with this continued increase comes higher competition and the increased need to maximise each opportunity. Despite this, recent reports suggest $4 trillion worldwide would be lost to abandonment alone during 2016.

Optilead surveyed 946 websites in the UK to identify how they react - and determine whether they engage with customers or leave them to become part of the global abandonment issue.

The average abandonment rate across all sectors is 76%. But it's not just the abandonment rate that's of concern – it's the low activity by ecommerce sites to drive customer engagement with online customers that they have already paid significant amounts to attract to their online store. Engaging in a timely manner with online visitors that abandon through a multi-channel solution can increase revenue significantly.

Each of the 946 ecommerce sites were tested 3 times for abandonment – the vital element to this being after items had been selected, and critical details (namely: email, telephone and name) had been submitted on the payment pages. Depending on the sector, relevant products were abandoned for low, average and high value. Tests were also undertaken for call back requests, where the service was provided. 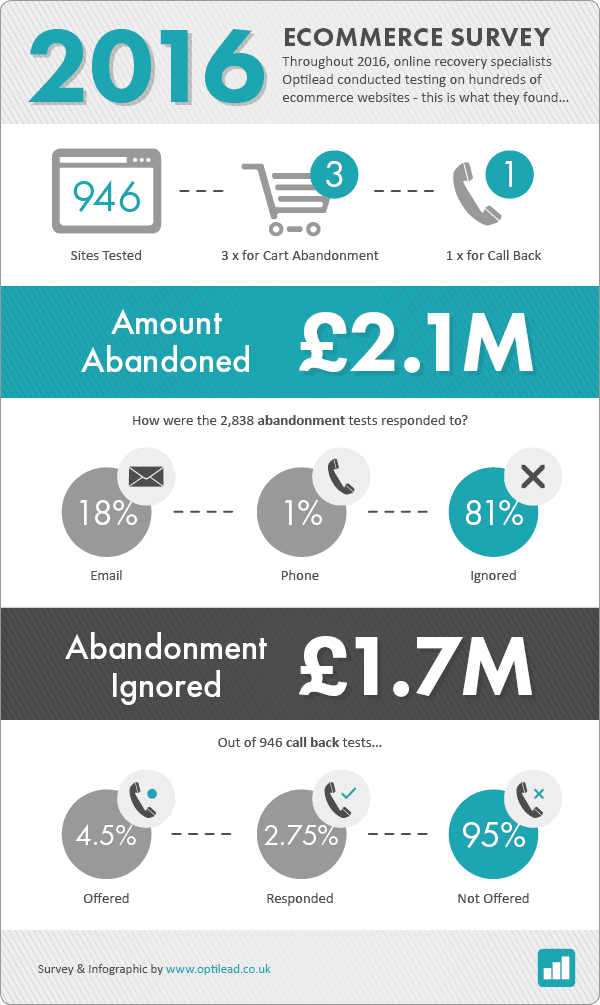 The average response time was 6 hours and 54 minutes. But with response delays like this, ecommerce sites are missing out on the opportunity to increase revenue by engaging with prospects instantly while they are still in buying mode and - more importantly - before they have gone to a competitor's website.

When testing was conducted for call backs, it was noted that just over 95% of the 946 companies didn't even offer the opportunity for a consumer to request a call back – not even during the cart or booking completion stages. Of the 42m that offered a call back only 26 responses were received with the average response time being 16 minutes.

“It's clear that the vast majority of ecommerce sites don't have a clear strategy to re-engage with consumers that abandon online or would like assistance during the buying journey. Each of the 946 sites tested by Optilead could make significant gains by engaging with potential customers that abandon online - not only financially, but also by enhancing the customer journey and the brand experience overall. Having a campaign to send out an email following abandonment might satisfy the needs of a marketer looking to show something is being done. But, if time is taken to implement a real-time campaign that truly engages with the end consumer while they are still in ‘buying mode’, before they head off to a competitor, brands will increase sales.”

Applying a real-time multi-channel approach consisting of phone, email & SMS, you can expect to see recovery rates from abandonment of up to 47%. But, more importantly by engaging instantly you will enhance your brand, increase consumer confidence, convert more business and the repeat or referral rates will be exponential.

E-commerce 2022: The latest data and forecasts for all things online retail growth It’s interesting to look back at e-commerce growth over the last few years and think forward to the future of this industry. As demonstrated by these charts …..

Social commerce gives brands opportunities to create seamless e-commerce experiences directly within popular social channels One of the things that has always fascinated me about social media is the way it continues to adapt and evolve to changing consumer trends. …..