By Expert commentator 09 May, 2013
Essential

Each quarter, CPC Strategy rates the top comparison shopping engines including Google Shopping, based on seller metrics such as traffic and revenue.

Contrary to the traditional seasonal trend of increased volume on Google Shopping during Q4, followed by a decrease in volume for Q1, Google Shopping traffic has not slowed into Q1 2013. Instead...

Google Product Listing Ads flipped the typical seasonal trend on its head for Q1 2013, with an increase in traffic which nearly doubled from Q4 to Q1.

This continues a trend from Q3 to Q4 where we saw an 87% increase in traffic which was to be expected given the progression of the new program in conjunction with the Q4 holiday season but what was surprising is the trend basically continued with an 82% increase from Q4 to Q1: 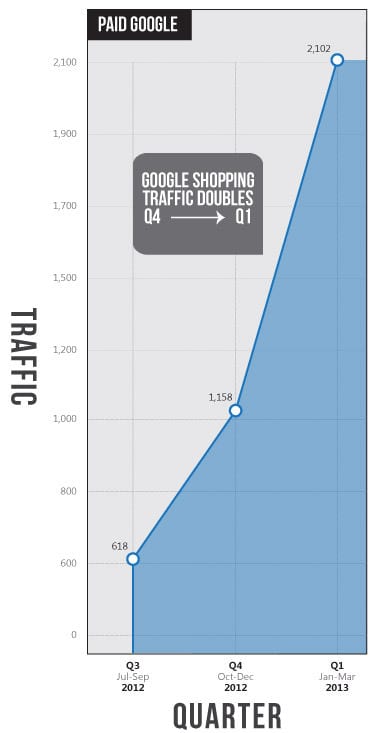 As a result Google Shopping’s increase in traffic after the holiday is an unusual trend to say the least. During this same time period, costs also increased by 21%: 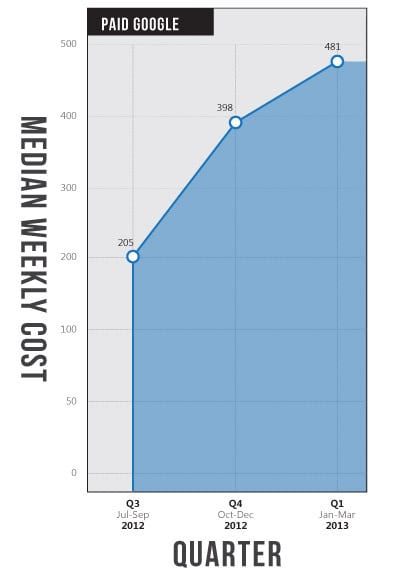 So why did Google Shopping traffic increase so significantly following the holiday?
Google is ramping up its exposure of Product Listing Ads (PLAs).

How do we know this?

Here is a look at how average (median) weekly revenue from free Google has compared to paid Google traffic since Q2 2012 (when all traffic was free): 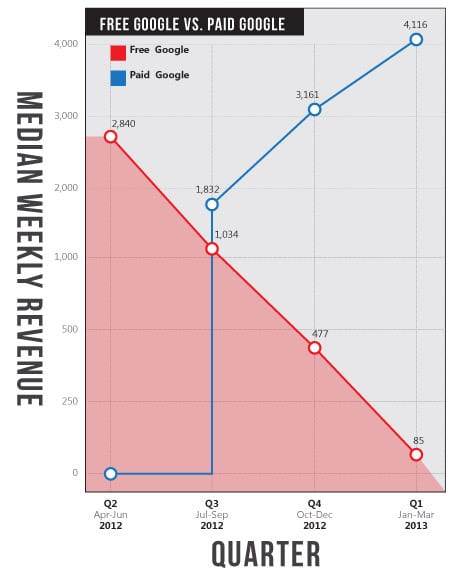 The bad news is revenue that merchants were getting for practically free is basically non-existent. The good news is the sky is now the limit for potential revenue.

Battle of the Giants - Google Shopping vs. Amazon Products Ads in Q4

In the arena of comparison shopping, just about every merchant knows that the real titans of industry are Google Shopping (and Paid Product Listing Ads, PLAs) and Amazon Product Ads (APA).  The former boasts a newer comparison shopping engine (CSE) backed by the undisputed #1 search engine in the world, while the latter is a pioneer in the e-commerce world and vaunts perhaps the most dynamic and innovative approach to online retail.

So the logical business-oriented mind would ask, “What’s the bottom line here?  Where should I put my money?” CPC Strategy has been analyzing the performance from each major CSE in the US for the last several years. Particularly in the last Q4 2012, the data has proved quite revealing and has implications what other countries will see as Google Shopping rolls out more widely.

Through an analysis of significant retail metrics such as conversion rate, traffic numbers, and average cost per click, we begin to see that though Google and APA are constantly duking it out for e-commerce domination, one giant was the clear winner during the Holiday Season.  Let’s look at the numbers. 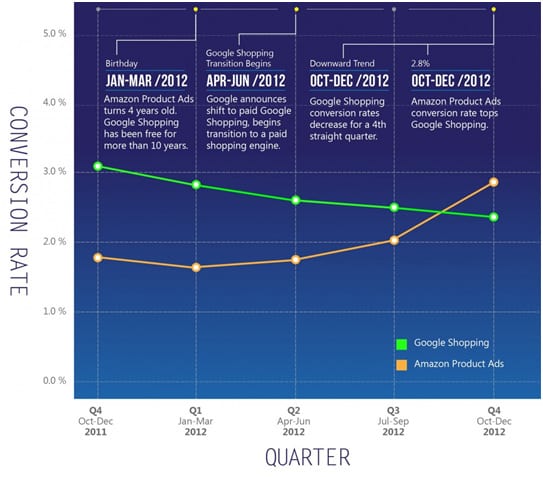 What’s somewhat alarming here is that Google Shopping’s conversion rate has been consistently decreasing since Q4 2011, where it stood at 3.1%.  In Q4 2012, we see that number decreased 22.35% to a conversion rate of 2.4%.  Why the downhill slope?  One could speculate that the gradual switch to a paid engine is to blame, where retailers’ relative bids now affect their products’ exposure. 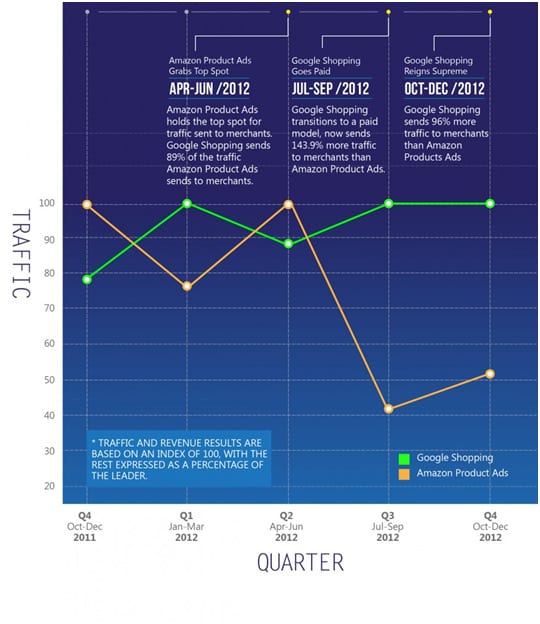 It’s quite clear that Google Shopping’s traffic has been consistently good over the last year.  In Q4 2011, we can see that they started out under Amazon, but as the switch to a paid model began to take effect, the traffic growth has been almost exponential.

It looks like from Q2 to Q3 Amazon’s traffic just plummeted, but this is NOT the case.  The reality is that Google Shopping sent 144% (that’s more than TWICE) more traffic to online retailers than Amazon, and so Amazon’s traffic is proportionally less.  In Q4 2012, Google Shopping sent 96% more traffic to retailers than Amazon did.

Why the discrepancy?  Google’s transition to a paid model also started to encourage other CSEs, like Shopzilla and Shopping.com, to advertise their products on the Google CSE.  Consequentially, much of their traffic was directed to Shopping.

Winner: Google Shopping with 96% more traffic sent to Merchants than Amazon in Q4 2012. 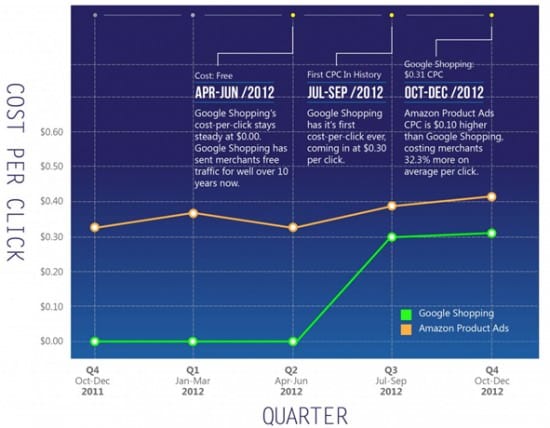 We haven’t painted the whole picture here.  There are still other significant metrics such as revenues, engine responsiveness, and cost of sale (COS) that need mentioning.  From the full rankings report (to be released next week on the CPC Strategy blog), however, it becomes quite clear that Google Shopping is the clear front-runner among paid CSEs.

Despite it's still relatively infantile state, Shopping just about stole the show during the holiday shopping season rush in Q4, and Merchants certainly need to start making some serious optimizations to their holiday Google Shopping strategy for next Q4.

Mary Weinstein is Content Manager at CPC Strategy, a full service shopping feed management agency for online retailers. Along with managing comparison shopping accounts and advising online merchants, Mary specializes in inbound marketing and curating content for the CPC Strategy blog. Thanks to Mary for sharing her advice and opinions in this post. You can follow her on Twitter or connect on LinkedIn, or on Google+.