What can marketers learn from the success of publishing sensation Buzzfeed? 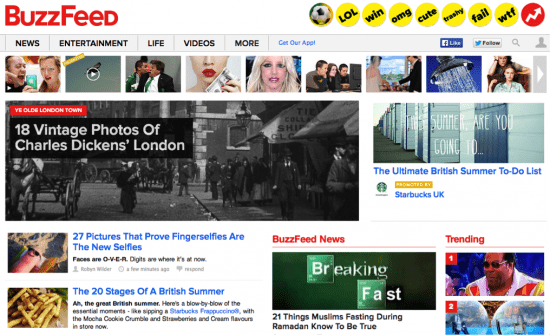 BuzzFeed is one of the fastest growing media businesses on the planet. In the space of four years they have transformed from a widely derided content aggregator site packed with pet memes and listicles that generated limited income into a profitable social content advertiser with over 300 staff, including a Pulitzer prize winner and a host of former broadsheet desk editors. They have an office in London, a cavernous headquarters on Fifth Avenue, their own video production studios and, perhaps most interestingly, a reporter based in Istanbul tasked with covering the conflict in Syria. 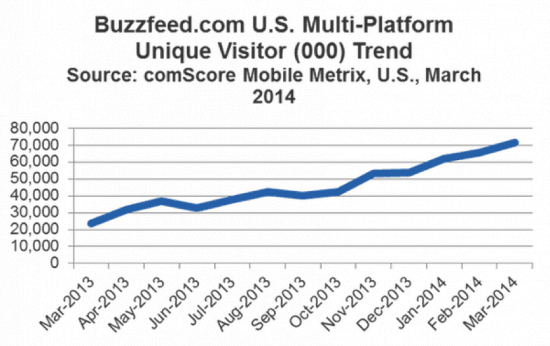 So, it’s safe to say that there’s more to BuzzFeed these days than ugly dogs, cute bunnies and cats climbing curtains. As I see it there are three main things that make BuzzFeed stand out from other social content sites – their traffic numbers, the shareability and editorial quality of the content and the opportunity those two factors afford for ‘native advertising’.

What then, can we learn from the content marketing strategy used by Buzzfeed?

The huge numbers of social engagements that BuzzFeed content enjoys doesn’t happen by chance – their content strategy is based on constant measurement, testing and analytics. Analysts monitor response to see which titles and themes are most likely to be shared, and each piece of content is analysed to see where traffic came from, how it was seeded and how it was shared via social interaction. But under all the analytics lies a dedication to quality content. As founder Johan Peretti stated in an interview with Wired magazine,

"You can make a crap article that's perfectly SEO'd and generates a lot of traffic, but you can't call that a win if it gives people a bad experience. In the SEO era, getting readers was about smart tricks. We think differently. What need does a story play in someone's life? When you're having a rough day at work and see '13 Simple Steps To Get You Through A Rough Day', that's servicing an emotional need: look at this hedgehog wearing a tiny hat -- you feel better, you share it with your friends."

The team also uses quizzes extensively. Summer Anne Burton, BuzzFeed’s managing editorial director, is leading the quiz initiative: “I had a data team pull numbers for the end of 2013, and there was a quiz that our entertainment editor had done months previous — Which Grease Pink Lady are you? — that hadn’t really been on my radar before,” she says. “Somehow, over the course of the year, it had accumulated the most digital shares of any post of the year.” As a result of this revelation quizzes are now a daily content type used by all teams including the news team. They drive engagement and most importantly shares. 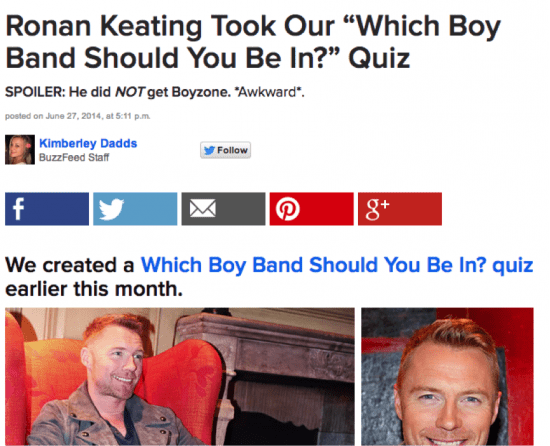 The Wired article goes on to list a BuzzFeed’s Golden Rules of Shareability. These include: "Don't use tricks. People don't like to feel stupid… Be yourself. Content should reflect your own identity, not anyone else's… Make content you would be proud to share… Experiment. No ideas are bad ideas… Have a heart."

At the centre of everything they do is an attempt to ensure and increase editorial quality. They have an editorial staff of 140 and there is a considered business case for that according to executive editor Ben Smith "If you want to be the central organisation of the central communications platform of the social-web era, a lot of the emotionally compelling content that people share is news, not just funny. You want to do both. On your Twitter feed, you see both jammed up together. That's what we do here."

While shareable high quality content is central to BuzzFeed’s business model and its primary driver of traffic, native advertising offers it’s greatest revenue stream. According to a BuzzFeed case study, a Virgin Mobile campaign involved BuzzFeed creating a 24/7 newsroom – 190 pieces of “interesting, timely, and brand-relevant content aligned with pop culture”. The work saw 9.7 million total engagements in 2012, less than half (4.7 million) of those were paid while the remaining 5 million where earned. This level of earned engagement adds both credibility and effectiveness to the brand messages being communicated, and it also makes native advertising a cost-effective method of reaching large, receptive and active social audiences.

“Social content allows us to tell the Virgin Mobile story, and that in turn excites people about the brand and what it stands for. We’ve seen lifts of over 150% in consideration for their next phone purchase. These results are some of the most impactful we’ve seen showcasing how social advertising can drive to purchase intent”, said Ron Faris, CMO for Virgin Mobile USA.

Perhaps most interesting for marketers is the way in which BuzzFeed uses paid media to amplify both the reach and the number of engagements that their native advertising receives. By working so closely with Facebook, BuzzFeed are able to negotiate favourable rates and that in turn allows them to offer a service that is greater than the sum of its two parts. Essentially, by working with BuzzFeed brands are able to not only reach the people who visit the BuzzFeed site, but they are also able to make use of BuzzFeed’s traction with Facebook, and draw on their expertise of advertising on the to Facebook users.

Summary - what can we learn from BuzzFeed’s success?

The aim of this article isn’t to persuade you to spend a fortune of BuzzFeed campaigns. Rather we're summarising key learnings from their success and the effectiveness of the brand communications. The three key factors are: