There's a lot of discussion in the press after the hacking of Burger King's Twitter account, and more recently the same has happened to Jeep, as it has many brands before. What are the implications? 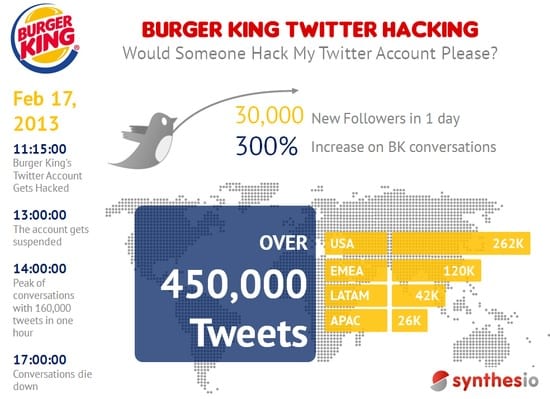 It's time for brands to step up

The talk now of course is about security, protecting brands that use Twitter enabling multi-factor authentication (as Facebook do) and so on. We need to make it *safe*. Haha - Are you kidding me, aren't we missing the point? Do brands need armbands and guarantees before they feel safe in the murky and uncontrollable world of social media? This issue of security is symptomatic of the bigger problem, I feel.

Let's be clear here, it's not Twitter's 'fault', they provide a free service for us all to use, if they can provide additional free features, then great (paid ones if we want them too), but let's get real and not expect it. Brands seriously need to evolve if they're going to use these tools, to train people effectively and have processes for when things go wrong (they will always go wrong - everything only ever changes), such processes are as important to help things go right, in the most part. Isn't this the case for any other grown-up marketing channel or tactic?

It seems to me that in social media there's so often blaming of the tools, in this instance it's about security, not the way in which those tools are managed. Brands recoiling at the lack of control in comparison to paid media formats. In similar ways we see brands clutching at data, leaning on it like a drunk to a lamppost - for support not enlightenment. I wish I could claim that as my quote, alas I heard it elsewhere.

Burger King hides behind a rock

Or maybe it was more a "hands over the eyes" scenario, I don't know. What's funny is that, throughout the 'ordeal' for Burger King, their following rose from around 70,000 to 112,000. Everyone loves light entertainment (or a train crash) depending on the individual.

From the hacking at 11am with the Tweet “We just got sold to McDonalds! Look for McDonalds in a hood near you,” to the account being disabled an hour or so later, and then eventually re-activated later in the evening, the offending tweets stayed live whilst Burger King branding was removed. A weird game of very bad hide and seek? 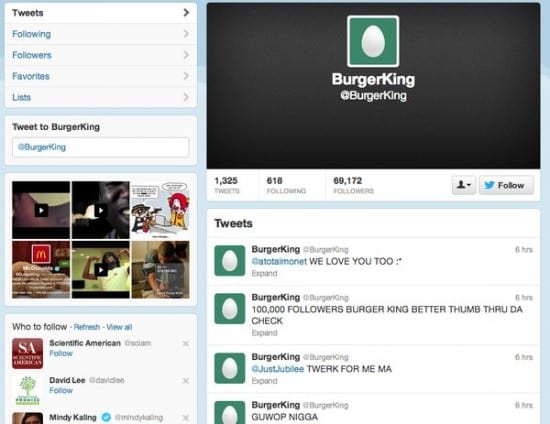 And the first tweet back? “Interesting day here at Burger King, but we’re back! Welcome to our new followers. Hope you stick around!” Please Burger King, if the 'ordeal' teaches anything it's that people are intrigued - so develop some personality - entertain, join in the fun even if today it's at your expense.

A lesson from Oreo

Whilst chatting about this yesterday, someone told me about Oreo's genius use of social media throughout during the worlds prime-time advertising fest, the Superbowl, this was only a few weeks ago. You're maybe not aware that towards the end of the game, about half the lights in the stadium all went out at once after a "surge in the building." It took about 35 minutes for the lights to come back on. Causing pretty significant disruption as you might imagine.

Oreo who, prior to the blackout, had been one of the advertisers, demonstrated what it means to be living in the moment and using social media naturally when the company tweeted, "You can still dunk in the dark" to its 62,000 fans, whilst the lights were still out in the stadium. A funny, perfectly timed and relevant piece of light entertainment (forgive the pun) which enables Oreo to get involved in the conversation. Look and learn... 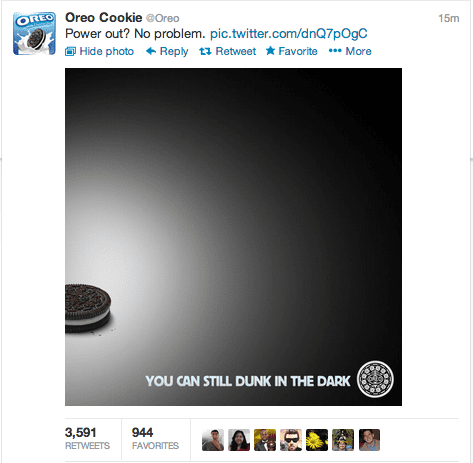 We are part of the real-time conversation and things will go wrong. Whether it's security issues, hacking, people tweeting the wrong thing or posting at the wrong time, bored lunatics keen to lash out, angry customers or ex-employees taking revenge - who knows - it will happen. The measure of the brand though is how they deal with it. Of course, you need to monitor and  review brand social mentions  and have in place an idea of how you will respond to a crises. But crucially, being human things go wrong is most important - you can't define that in a social governance policy!

For all that digital marketing can be measured and calculated, we're all people at the end of the day. I hope we see big brands wake up to their phenomenal potential.