By Expert commentator 14 May, 2014
Essential

One of the biggest names in social media has finally joined the mobile marketing revolution. After Facebook announced that almost half of its revenue now comes from mobile ad sales, Twitter made the wise decision to revamp their mobile app to increase their revenue opportunities from advertisers.

In April, the company announced an app install suite which takes advantage of their previous acquisition of MoPub in order to allow advertisers to reach their audience both on and off site.

The new interface will allow for the marketing of other apps, giving users the opportunity to initiate an app download on their phone from within a tweet.

By creating the ability to promote apps within their app, Twitter has given advertisers everything they need to capitalize on an ever growing market.  Now more than ever, people are connecting to the Internet through the use of apps on their mobile device - 89% of media time is within apps. With the two biggest social media sites in the world now crafting their advertising opportunities to meet the volume of mobile use, advertisers need to review their best options. Paul Fabretti's tweet makes this point well.

Here's the modern communicator's biggest challenge in a nutshell. If you're not trying to fathom this, you're dust. pic.twitter.com/85ssFBjeMY

In addition to their app promotions, this new ad program utilizes MoPub to connect advertisers with markets linked to either service. In other words, if you want to promote an app on Twitter while simultaneously advertising a new product elsewhere, you can do it. They’ve effectively combined the power of the two most important forms of mobile advertising, which makes digital marketing easier than ever. 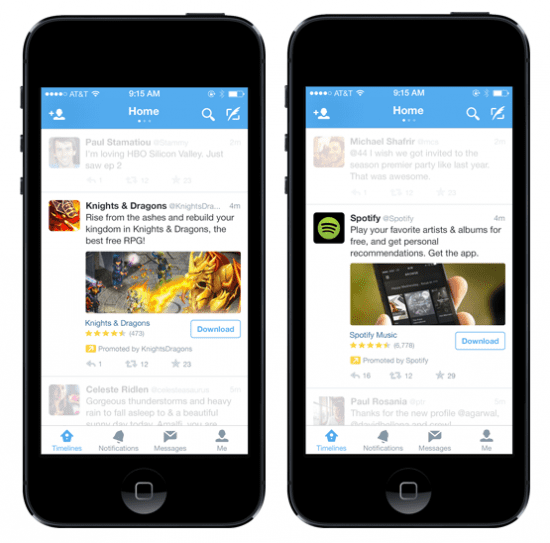 With access to one of the largest social media sites in the world and one of the biggest names in advertising, this new ad program will give digital marketers the ability to work efficiently, and craft a marketing strategy that will function well across all mobile platforms.

With native ads available through MoPub and app promotions possible on Twitter, it will be relatively painless to ensure that you send the same message to all of your mobile viewers.

This is incredibly important for a brand that needs to stay on point, as it allows marketing gurus to focus all of their attention on just one advertising program, instead of multiple programs at the same time.

The time is now

If you were wondering when to take advantage of this great new technology, the answer is now. 60% of the 200 million people actively using Twitter access the site through the use of the mobile app. If there is anything we can take away from the direction that this well respected company is taking, it is this: mobile marketing is the future.

Every major industry is now aiming their content at a crowd that prefers to take their business on the go. No matter what you are marketing, chances are that it will sell better to a mobile audience than it will to traditional internet users.

User response to ads is as yet unknown

This new app advertising programme is still currently in beta, so we have to ask, will it work? For now, we can say that Twitter seem to making all of the right moves. It would appear that Facebook’s biggest competitor has taken a page from their book, focusing on native advertisements that are non-intrusive and aimed specifically at the viewer. These ads truly look like just another tweet on your timeline, making them extremely valuable to digital marketers.

We have yet to see how mobile users will respond to this new ad program, but if their competitor’s success is any indication, it would appear that this little blue bird is about to soar!

Thanks for Mark W. Kirkpatrick for sharing his thoughts and opinions in this blog post. Mark is a writer specializing in social media, SEO, and the globalization of business. More of his work can be found at 1800-number.com, where he aims to stimulate conversation about the effects of globalization on search engine optimization and social media.