Bo Burnham is an American comedian about to release his first film, Eighth Grade, about an eighth-grader called Kayla finishing up her classes before starting high school. Writing believable dialogue for a character much younger than himself was a difficult task that Burnham’s script pulled off – apart from one important detail:

“The only thing I had [Bo] change was, originally, all of Kayla’s DMs and social media stuff was through Facebook. And so I went up to him and went, ‘Nobody uses Facebook anymore, what is this for, my aunt?’ So, he changed it from Facebook to Instagram. That was the only thing I corrected him on.” 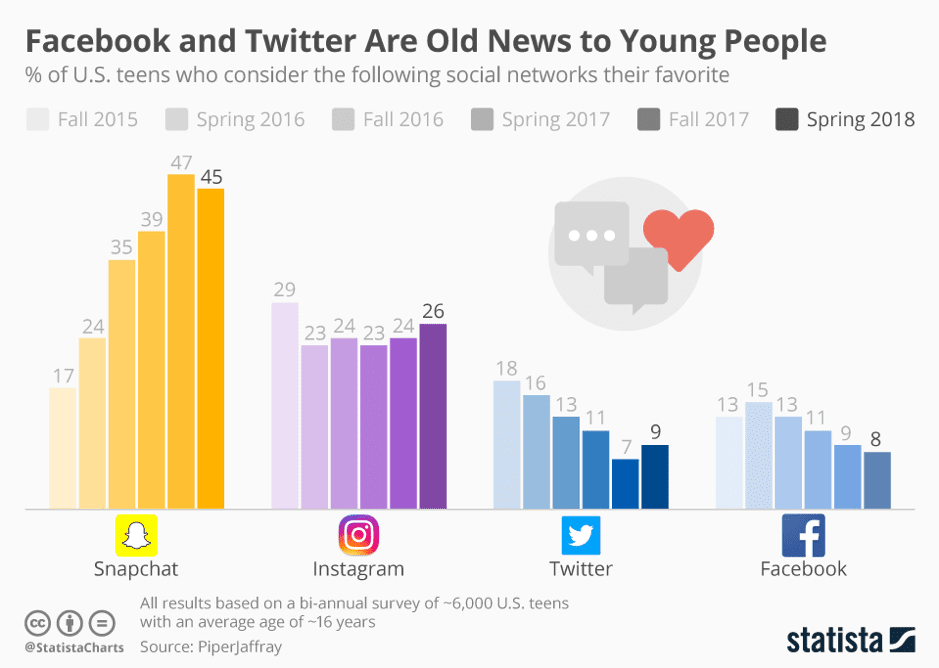 Well, it sure isn’t for young people. In a bi-annual survey of approximately 6,000 US teens, their attention has clearly turned towards Instagram and Snapchat when it comes to their favourite social networks. It’s easy to see why, as both platforms are geared towards quick moments of content consumption through pictures, videos, stories.

In terms of content creation, however, users can still pour hours of time into Snapchat and Instagram, perfecting their images by adding text and filters. Brands can get in on the action by creating custom filters for special events, some recent examples being the FIFA World Cup and the release of Jurassic World: Fallen Kingdom.

By no means is this research a sign that the Facebook ship is sinking. It remains one of the most powerful brands in the world and has grown to over 2.19 billion active users. It still presents a wealth of advertising and PR opportunities and it even bought Instagram in 2012 for $1 billion, showing it isn’t oblivious to the changing attitudes of young people.

What the research does show, however, is a sign that the generation that grew up while Facebook emerged as a global brand has grown up, had kids, and largely stayed with the platform. Young people may use it to stay in touch with their family or people they’ve lost touch with, but image-led social networks have captured their attention and are a more effective medium of promoting your company’s message to young people.

James Story has worked in the world of digital marketing since 2014 as a content and online PR executive. Specialising in content creation, he has been part of award-nominated projects and instrumental in the creation of content hubs. With a passion for the written word and an eye for detail, he is currently the Content Manager & Data Analyst for all of Smart Insight's resources. You can connect with James on LinkedIn