How do social signals impact your search ranking?

There is a link but not in the way some marketers like to think.

One question that refuses to go away in search marketing is how social signals impact organic ranking. Google tells us there’s not much going on here but a large section of marketers seem to think otherwise. And, let’s face it, this wouldn’t be the first time Google has held back from giving us marketers the whole picture.

So what’s the real deal with social signals and search marketing? Well, there is a genuine link between the two – but not in the way some marketers like to think.

What does Google say about social signals?

Not a great deal. It’s one of those topics the search giant likes to keep close to its chest. That said, the few comments we have had from Google say social signals are not a direct ranking factor.

In 2014, before Matt Cutts disappeared, he shed some light on the topic:
To sum it up, he said Google can and does crawl social pages like any other. However, its crawlers get blocked from any number of pages and data from social networks, which poses access problems.

Something Cutts doesn’t mention in the video is how vulnerable search engines would be to manipulated social signals. Using likes, shares and similar metrics as ranking factors would only give spammers more reason to use fake social accounts. It would be a major step back for Google at this stage.

So what about Google+ and +1? There may have been a time when +1s had an influence on page rank – although Cutts also denied this in 2013. Either way, if they ever were considered, it’s pretty clear they aren’t now.

Can we trust what Google says?

In this case, it’s hard to find any reason for Google to lie. Social signals may seem like the ideal replacement for links as a ranking factor – but it’s not that simple.

First of all, the way Google crawls the web makes a lot of social content inaccessible. Then you have the issue of fake accounts and spam, which Google has no control over on third-party platforms.

There’s also a question about interests at play here. If Google started using Facebook likes, shares and other signals as a ranking factor, would this encourage more advertisers to sign up with its biggest rival? Almost certainly. So, from Google’s perspective, social signals aren’t the great solution some marketers believe them to be.

So how are social and search related then?

As I said in the intro to this article, there is a genuine link between social and search. This doesn’t mean any social signals are ranking factors, nor does it mean they directly benefit your search ranking.

If Google can crawl social pages like any other, then it can also read social links like any other. We can only speculate how much value (if any) Google gives to these links. The same can be said for brand mentions and other citations on social pages – Google may or may not pass value to them.

Links and citations are a core part of Google’s algorithm; nothing to do with social media in the search giant’s mind. So when Matt Cutts says there are no “special or specific” considerations for social signals, we think this is what he means. Essentially, there’s a small grey area between social and search marketing.

The indirect links between social and search

Countless marketers and agencies have stepped forward with data to show content that performs well on social tends to rank high in search. Meanwhile, publishers who regularly produce content that engages people on social tend to perform well across search in general. 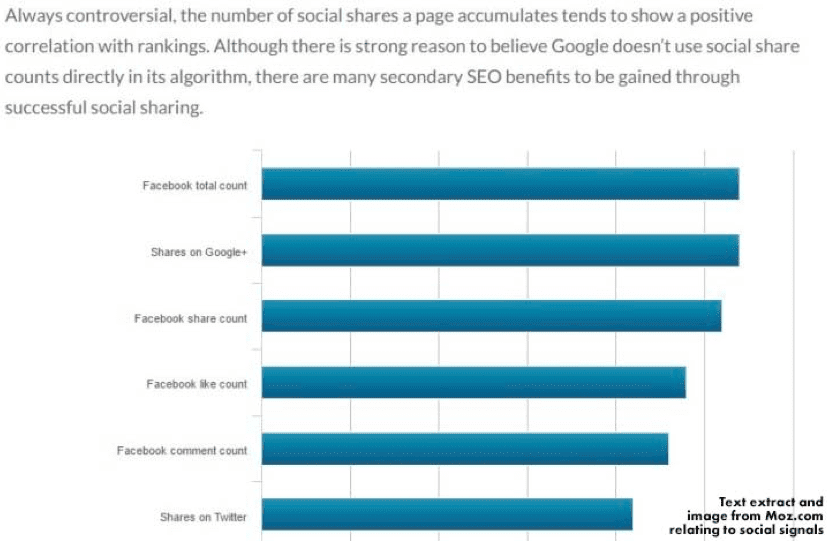 We have data that shows the exact same thing, but none of it says brands rank higher because of social signals. Google tells us it’s a case of correlation vs causation and there’s absolutely nothing to suggest otherwise.

The simple fact is this: good content should perform well on social and search. If your content excites people enough to like, share and link to it on social, then it’s good enough to earn links elsewhere on the web. It’s also likely to be highly relevant, well produced and countless other things you would expect from high-ranking content.

Brands that produce this kind of content on a regular basis earn a large audience. These people talk about that brand and share their content in large numbers. They’ll also get more clicks when they show up in organic results because they’re trusted and they’ll also get a lot of shares on social. If that sounds like you, then you’re performing well across search and social because your content rocks, not because they directly affect each other.
So, instead of looking at social media as a way to boost your search ranking, think of it as a way to gauge how good your content is. If you’re getting a great response on social, then you must be doing something right. Otherwise, it might be time to start thinking about another approach – one that engages people on social and search.

Lee is Head of SEO at Vertical Leap, having previously worked client-side and run his own search marketing company. He has recently authored an SEO book.