Mobile SEO
Chart of the Week

Voice-related commands have risen 35x since launch of iPhone

The SEO industry exists because ranking highly in Google search is incredibly valuable. Google makes an incredible 70 billion from PPC each year, based on people paying to appear at the top of SERPs in AdWords. The whole industry is built around ranking for keywords which people search. Traditionally, these searches were made via keyboards, whether on a desktop or on a mobile device. But this is starting to change, with the rise of voice recognition assistants such as Google Voice Search, Siri or Cortana people are increasingly searching the web by just opening their mouth. This will inevitably have a massive impact on how people search and the way they structure the keywords which they use to access information. The chart below shows the rise of people using terms associated with voice-recognition commands. 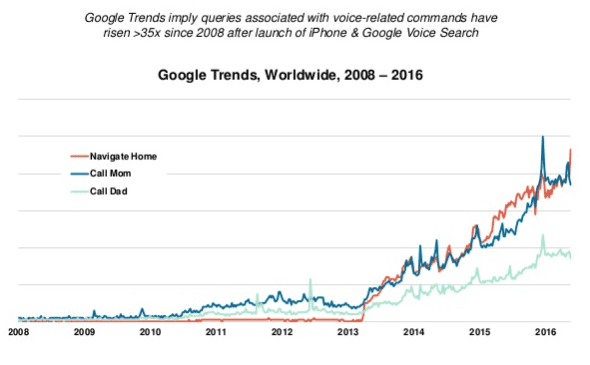 As you can see, voice search has grown massively from almost nothing pre-2013. It shows the importance of creating pages which answer the natural language phrases people are more likely to use in Voice search.  The other key insight of the chart, regarding the popularity of Mums vs Dads is a debate for another time!