Google Posts wasn't so much launched by Google, as it was quietly rolled out with little to no fan-fare. Months have passed since the feature first went live for a select few people, but still most digital marketers haven't heard of them. So what exactly are Google posts?

Google Posts are short snippets of text, rather like Tweets or Facebook status updates, uploaded directly to Google rather than social networks. At the moment they are only available for US Presidential candidates, but their landing page suggests that Google aims to open them up to "verified people and organisations". You can see an example of a Google Post below for a 'brand search' on Hillary Clinton where it forms part of the Knowledge Graph on the right. 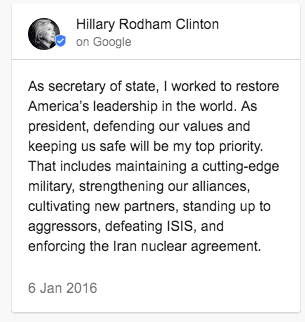 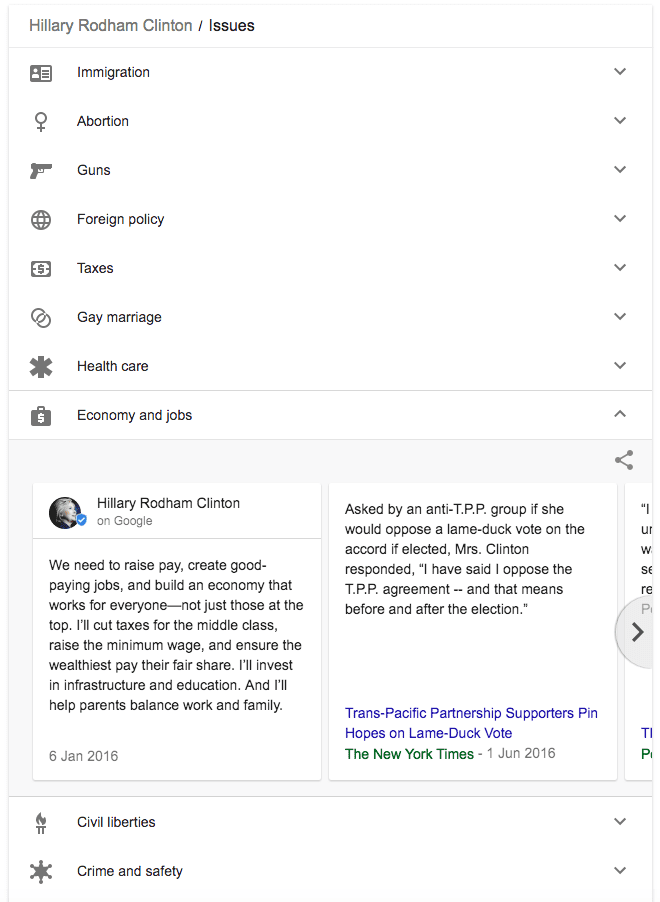 What about for everyone else?

"Now we're experimenting with a new way for users to hear directly from select entities they're searching for on Google."

Whilst for now it's just US presidential candidates(!) hopefully it'll be opened up to more people and brands soon. Google lets you sign up for waiting list to get the feature in future if you're a public figure of organisation, so there is reason to hope brand will be able to start using soon enough. The question is what will it be for?

What is clear, is that, once rolled out to brands, Google Posts will appear at the top of certain SERPs relating to your organisation (or your name if you're a public figure), and thus represent a massive opportunity for brands. It's also something SEOs should keep an eye on.

The fact that they are invite-only and you have to join a waiting list suggests Google will be manually verifying users, and the little blue tick on their photo which you see on current Google Posts shows users that they are getting the information straight from the horse's mouth, so to speak. Hopefully, brands will thus be able to use Google posts in future to dominate their brand name SERPs and communicate with customers. All we can do now is wait and see what Google do with them, but make sure to keep an eye out, because Google Posts hold a lot of promise.

There is no mention or relation to Google+, showing again, that Google no longer has focus on this, but is open to experimenting with new ways to share real-time, content to share within the SERPs, in this case related to the Knowledge Graph.

How to build a successful account-based marketing (ABM) target list

57% of organizations are failing to plan. Here’s what you can do about it

“Plans and strategies are crucial.” You hear this a lot in the marketing world but, it seems, many of us are failing to put our money where our mouth is – or finding it harder to do rather than just …..