How to use emotion and logic in your marketing messages

Learn to love The Logic Sandwich

To successfully take people through a whole buying decision, you need to find the right balance between satisfying their emotional and logical needs. The human brain has two halves: the left side of the brain is rational, considered and thoughtful, the right is creative, intuitive and spontaneous. To really get someone on board with your brand, you need to appeal to both sides of their nature. In short, you need messages that tick their emotional and logical boxes. 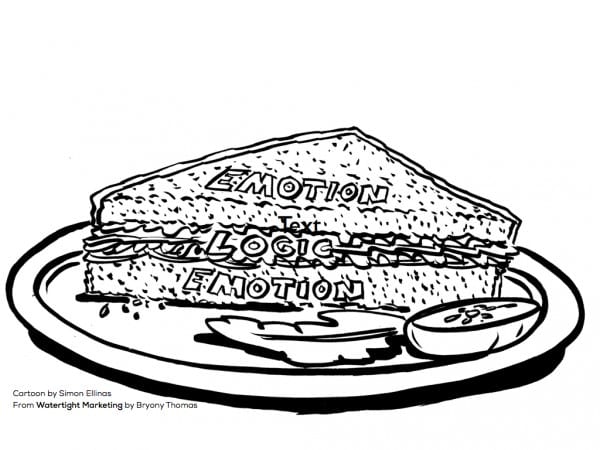 Are you serving up a Logic Sandwich?

Whatever you’re selling and whomever you’re selling it to (in the vast majority of cases), you are selling to a person: a human being. And, real people are primarily driven by their emotions. Even when what they articulate is a logical motivation for a purchase, there will be an emotional driver behind that.

For example, a manager may logically want to increase productivity in the workplace. This makes great business sense, but might really be because he’d be less stressed if he can go home feeling that he’s done a good job, or in time to read his children a bedtime story. There are always two sides to a decision, and you need to satisfy both.

This is about what to say, and, crucially, when to say it. You need to satisfy the different types of need in a particular order: start with emotion, move on to logic, and then return to emotion. It’s what I’ve taken to calling The Logic Sandwich.

Marketers will often talk about finding your killer message or ‘unique selling point’. This supposes that there’s one magic message that will get people to buy your stuff. In reality, there are a series of connected messages that differ according to the thought process a person is going through at the time and in relation to a given decision.

In my earlier post - The consumer buying decision process -  I dissected the buying decision to show that it's a stepped journey, and mapped a marketing task to each step. And, you need to keep people moving. The emotional and logical content of what you say is at the core of maintaining this momentum. If you now map the tone (i.e. emotion or logic) to each stage, you get to a powerful marketing messaging map that supports the whole decision. 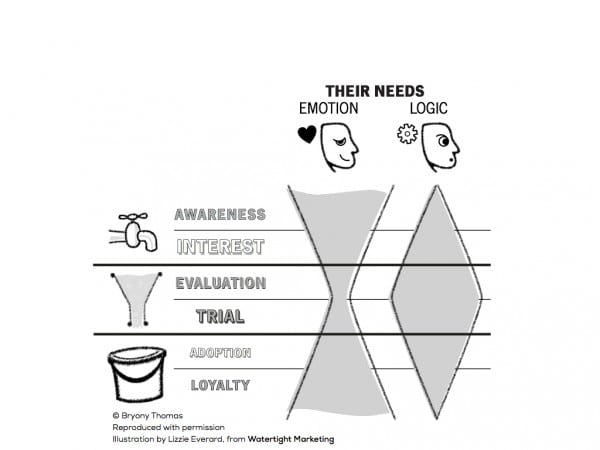 Which need is driving their decision at each step?

A buying decision we can probably all imagine is a family choosing a new home. They may be prompted into action by the arrival of a new child. They start to see their home as cramped and imagine it will be uncomfortable for a larger family. In the case of a first child, where they’re living may not be the kind of place they want to raise children. There’s a problem to solve (Emotion = High) . They’ll draw up a list of the things they need from a new family home: number of rooms, parking, proximity to good schools, garden space, etc. They’ll also be mindful of logical constraints, like their budget, how much renovation they could take on, and driving distance from their place of work. Then, they’ll start the search. The logical criteria will rule things in or out (Logic = High). But, very often the place a family ends up buying is the one that they ‘had a good feeling about’. Indeed, compromises are often made on the wish list, or budgets stretched to breaking point, for somewhere that feels like home (Emotion = High).

In this scenario, they were jolted into action by a problem and the negative emotion that goes with that, they logically reassured themselves of their choices against a list of specific criteria, but the final decision was very much driven by the heart and the positive picture of a comfortable family life. And, this, to a greater or lesser extent, is the journey you’re trying to replicate for people who buy from you.

What this example also demonstrates, is that of the two sorts of appeal, emotion is the most important because it tops and tails the process. Logic on its own will rarely initiate action. To initiate a journey and keep people moving through their buying decision towards your products and services, you’ll need messaging that starts with emotion, moves onto logic, and then returns to emotion. You need messages that hit the right tone at each step of their decision. If it doesn't, they are unlikely to move forward.

Map this into a table, and you have yourself a powerful marketing messaging matrix that supports the whole buying decision. 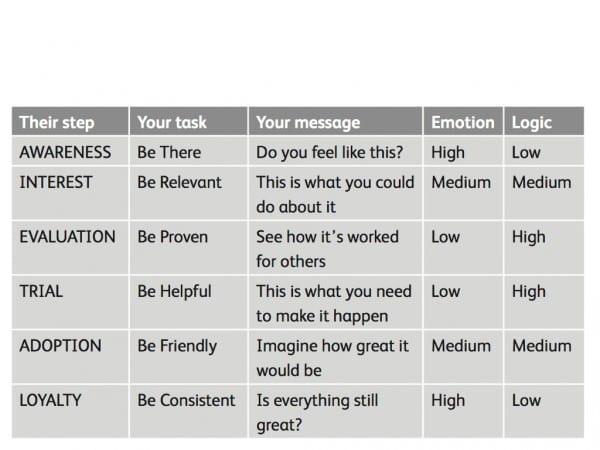 Have you mapped your marketing messages to the steps in a buying decision?

Information risk consultants, Ascentor, help organisations to ensure that their business information is appropriately secure. They found that many companies they talked to didn’t see a need for their services because they had a technical solution in place, like encryption or firewalls. They needed to help people recognise that information security was not just an IT issue. To do this, Ascentor used a negative emotion: fear. They commissioned a poll, verifiable proof, that found over half of the UK workforce willing to compromise their employer, by way of its information, in retaliation for perceived mistreatment, like being passed over for promotion. The survey exposed frightening figures on employees having already stolen data or passed information to competitors. They used this to run an awareness campaign that helped people visualise this very real, and very human, risk factor. This was used to drive people to an event where Ascentor presented ways to resolve these issues, providing those all-important positive emotions.

It's about what to say, and when to say it

Most companies have a lot of the right messages. It’s the order they get wrong. This manifests in a number of ways I’m sure you’ll recognise. Here are the three most common pitfalls:

If you’re too logical too soon, you will find people are actively put off, or simply don’t notice you. Listing your facts and figures just doesn’t tick that emotional box, and the sale is lost before the journey has even begun.

It’s called ‘features-based selling’ and it assumes that your buyer will be able to look at the factual information on the features you’re presenting and interpret what that will mean in their life. It’s an assumption that rules out a vast proportion of the buying public, who are busy getting on with their lives and need an emotional trigger to prompt them into listening to what you have to say.

It’s only when you’ve triggered the emotional response that people become interested in the logical side of your offering. Once people feel that they have a problem and are excited that you may provide the solution, they will switch into a logical frame of mind where they seek to verify that.

What’s really interesting about a buyer who’s switched into logic, is that emotional appeals now become an irritation. Imagine...

Now, these aren’t great answers even if someone was in an emotional frame of mind, but if their brain is in a logical gear these sorts of answers seem evasive and unhelpful. It’s exactly the sort of salesmanship that you’ll hear people describe as ‘slippery’, or ‘wouldn’t answer a straight question’.

When potential buyers are looking for logical answers, you must provide them. Whether that’s in person, in store, online, etc. This information is essential – but, at the right time. The middle part of the process is the time to list off those evidenced features.

Give them a hug when they've made their decision

Once you’ve ticked a person’s logical boxes, you will find that they switch back into emotion. It’s almost like a sigh of relief as they reach a decision that they’re happy with. You need to recognise this switch, and validate it.

You need to find a way of ending the journey on a high. At the beginning you were pricking a pain point, however you’re now giving them a sense of relief and excitement that their pain is about to go away. You need to make sure that your sales journey ends with your buyer picturing themselves better off as your customer. This is what people will want to move towards and it will keep them moving in the right direction.

This is where positive emotions, and human interaction, are really powerful. To get them through to a purchase you need to ensure that they can picture themselves enjoying the outcome. Simply having an enjoyable chat with them via social media can really assist this. What’s certain is that if you keep banging on about all the logical reasons to buy your stuff when someone has already mentally made that decision, you can spoil the moment.

Thanks to Bryony Thomas for sharing her thoughts and opinions in this blog post. She is the best-selling Author and Founder of Watertight Marketing, and a no-nonsense marketer and business speaker, specialising in helping ambitious small businesses set things up. Her blog post is adapted from her 5-star book, Watertight Marketing, described as an entrepreneur’s step-by-step guide to putting a marketing operation in place that delivers long-term sales results. You can download a free sample chapter or connect with her on
LinkedIn, Twitter, Google+ or Facebook.

Bryony Thomas is our Expert commentator on the fundamentals of marketing which are still so important to get right. She is Author and Founder of Watertight Marketing, and a no-nonsense marketer and business speaker, specialising in helping ambitious small businesses set things up. Her blog post is adapated from her book, an entrepreneur's step-by-step guide to putting a marketing operation in place that delivers long-term sales results. You can connect with her on LinkedIn, Twitter, Google+ or Facebook.

How to write an effective Coronavirus-related campaign

Practical copywriting tips and examples for e-commerce websites As Coronavirus spreads around the world, e-commerce websites need messages telling customers what service they can expect from the new normal. A few are doing these really well, but many are falling …..

This is why now is the time to do persona research

I’m sorry to break it to you, but building personas will probably take twice as long as you think it will. Now’s the time to create accurate personas to reap the rewards from doing so. When thinking about personas, what comes …..