Chart of the Day: Google's share of US paid search clicks by device

As of April 2017, the global marketing share percentage, in terms of the use of search engines (on desktop), heavily favours Google with over 78%.

Now, in Merkle's Q3 2017 Digital Marketing Report, they also have a share of 97% for US paid search clicks on mobile. 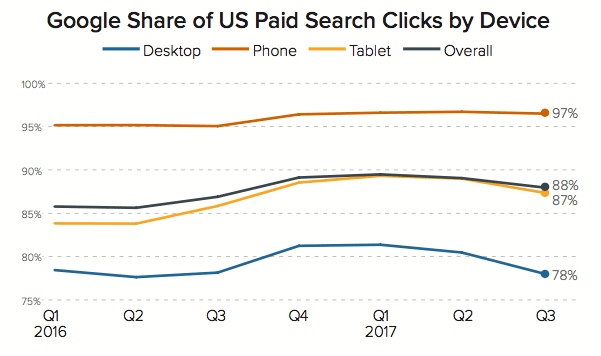 Google search ad spending growth remained strong in Q3 2017, rising to 24% year over year (Y/Y) in the US, while dipping slightly to 13% growth in the UK. Mobile and Google Shopping continued to drive growth, but desktop spending remained resurgent following a late 2016 change by Google to allow advertisers to segment desktop and tablet search ad bids. - Merkle

As the research shows - mobile has the highest share for US paid search clicks with desktop considerably trailing behind.