Campaign of the Week: How Nike changed the consumer brand marketing universe…again

Nike has done it again. They've turned heads, they've shown their brand mentality and they have got people talking about them. This week they celebrated the 30 year anniversary of their "Just Do it." slogan.

They had bags of content that they could've used for it, not to mention sports stars. Nike for the first time have stepped into the social arena of current events and made Colin Kaepernick, the outed NFL Quaterback who knelt during the national anthem, the face of the campaign.

This is an amazingly bold move from Nike as even President Trump stood against it along with Kaepernick's team and the NFL themselves. It came to light that Nike had not dropped him from their books and in fact went into talks to make him the face of the anniversary. They even aired the advert at half time in the first game of this years NFL season

I'm sure this decision from Nike was considered and losses in earnings would've been expected. Many took to social media to burn their Nike items in protest. 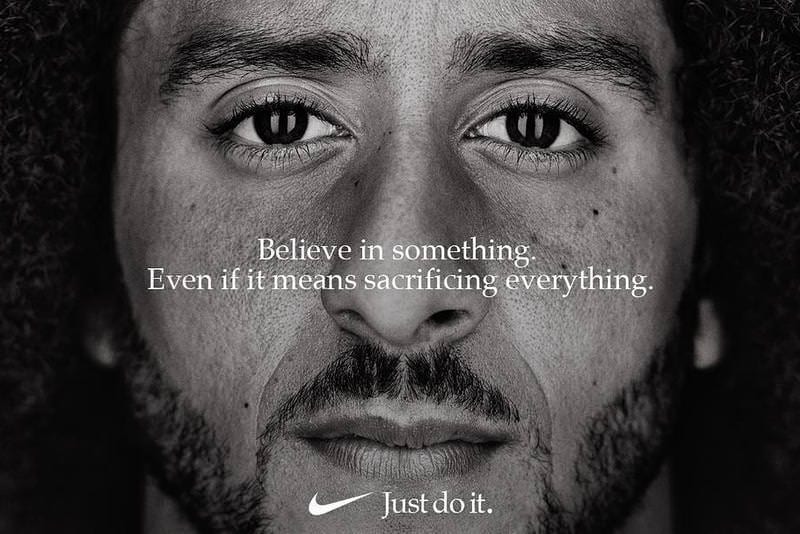 Two words. Target. Demographic. Nike is not being controversial for controversy sake, they are standing up Kaepernick in a societal problem in America. Racially charged police brutality is something that cannot be ignored and up until recent times, it has not been so forefrontal in the media.

Kaepernick stood up for his beliefs and Nike has chosen to stand with him. Younger generations are far more progressive and in the wake of the Kaepernick case, young people showed their support.

So Nike decided to lose the vote of the baby boomer generation but gain more following in the younger age groups. Younger age groups will be purchasing for longer into the future so in turn a strengthened relationship with millennials and below has been created.

It seems they are correct as Nike Inc sale surged 31% in the following days and their share price is the highest it has been in history.

Consumer brand marketing is easily one of the hardest challenges for a brand of any type. This needs to be effective and resonating for your potential customers to purchase from you. The sports giant that took its name from the Greek Goddess of victory, Nike (Pronounced /ˈnaɪki/), managed to be victorious in their attempt. Today I'm going to tell you the story behind its resounding success. Let's do it... 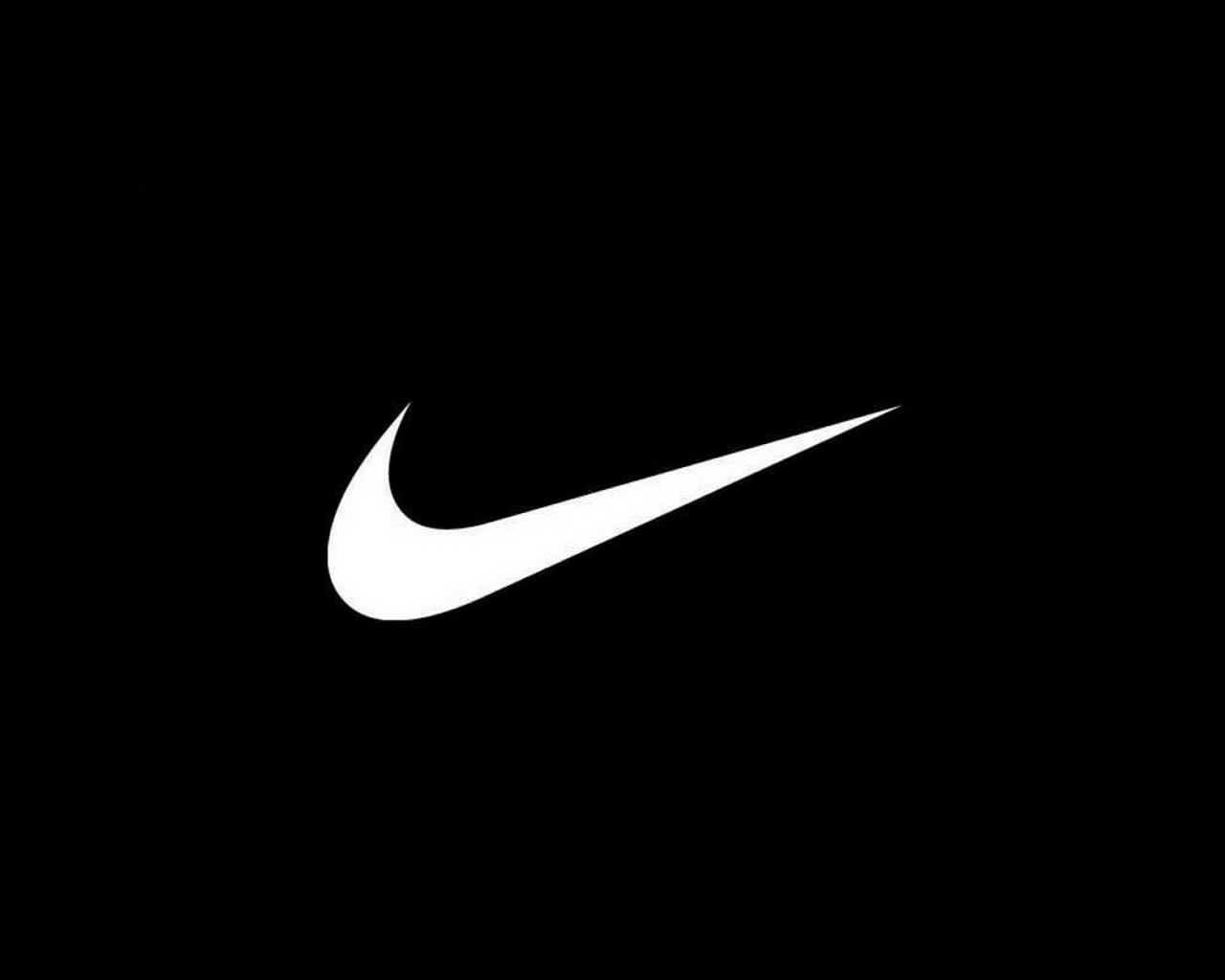 The year is 1987 and Nike are looking strong. However, instead of looking forward at the clear track at the front of the industry, they're looking back at their competitors. The likes of Reebok have caught up with their diversification in demographics. They had created an aerobics shoe range that was targeted at females and had caused their sales to skyrocket.

To add to this, Nike had a more national societal issue to overcome.

Obesity and procrastination was a problem in American society for a majority of the population. An economic recession had resulted in many schools cutting back on sports programs out of budget necessity. The Nike brand was only speaking to a narrow range of male athletes in competitive sports arenas.

Nike needed to widen the access point in its brand communication model to become relevant to wider circles of people including women and all baby boomer fitness enthusiasts. The actual role that fitness plays in peoples lives, the actual experience of really working out, doing aerobics, going on a bike ride, etc. has the effect of lifting peoples moods & spirit. But none of this was captured in the way that Nike was communicating up to that point. Daily participation in sports and fitness gives people something very profound, which is an experience and feeling of joy, a runners high, a lightness of being. 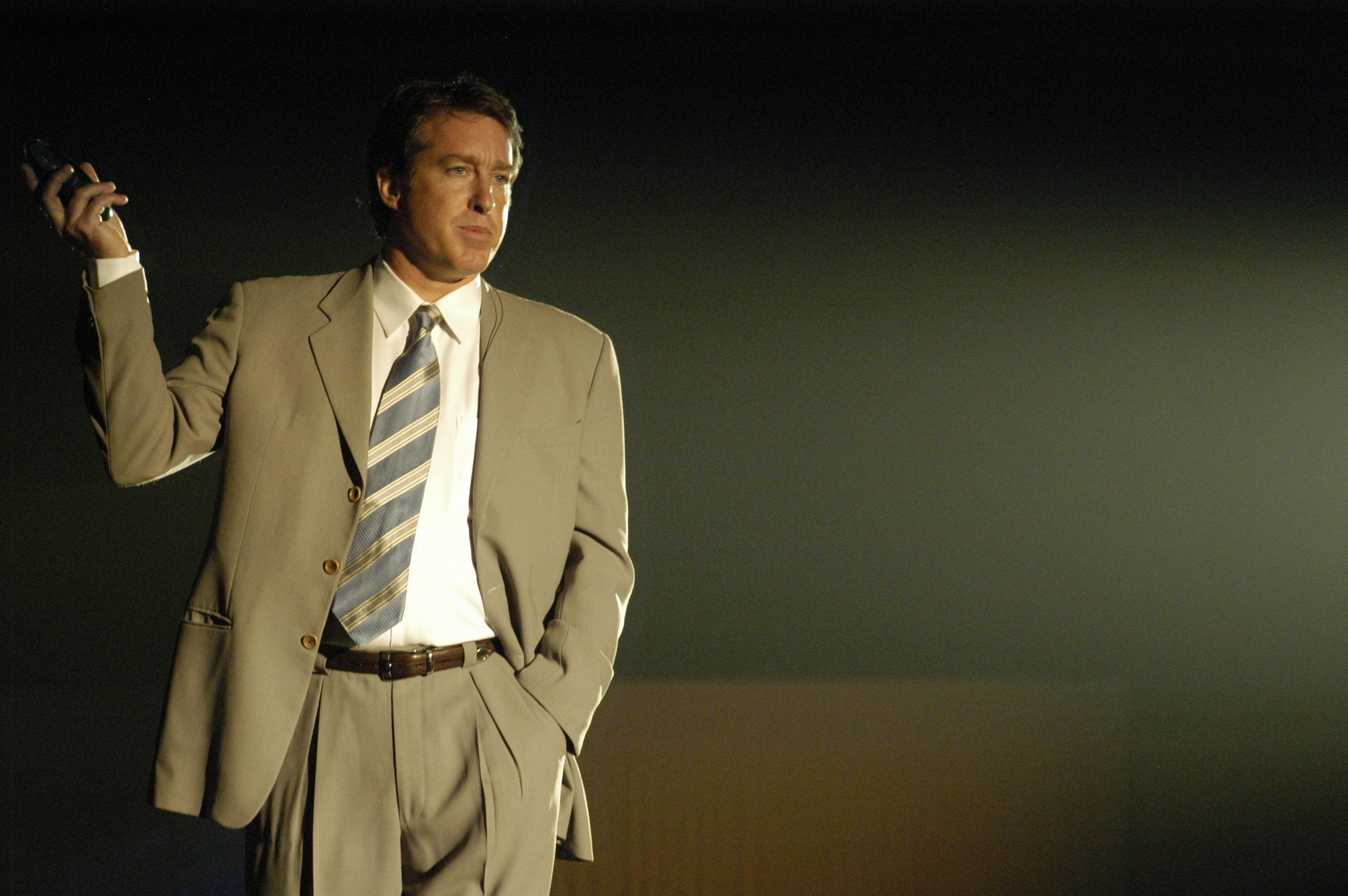 Jerome Conlon and Scott Bedbury, spent the winter of 1987 trying to work out how they were going to change things up. They deliberated back and forth for months with Execs pushing back on their ideas. In the end, Scott decided to go with his gut and move ahead with the brief he'd come up with which was just one page long.

Nike is about to become a significant network television advertiser. We will spend nearly three times what we spent on the ‘Revolution’ campaign in the fall of 1988. (Despite the high visibility of ‘Revolution,’ Nike had spent less than $5 million on TV that year.) This is a turning point for a company that not long ago spoke to its customers at track meets from the tailgate of a station wagon. This just cannot be a narrow look back at where we have been. We should be proud of our heritage, but we must also realize that the appeal of ‘Hayward Field’ (an ad set at the University of Oregon’s Track & Field Stadium) is narrow and potentially alienating to those who are not great athletes. We need to grow this brand beyond its purest core…we have to stop talking just to ourselves. It’s time to widen the access point. We need to capture a more complete spectrum of the rewards of sports and fitness. We achieved this with ‘Revolution.’ Now we need to take the next step.

I should mention that he did this without permission from the exec board and having been in the job for less than a year.

Anyway, enter one of my favourite agencies and stars of my previous Campaign of the Week, Wieden + Kennedy. 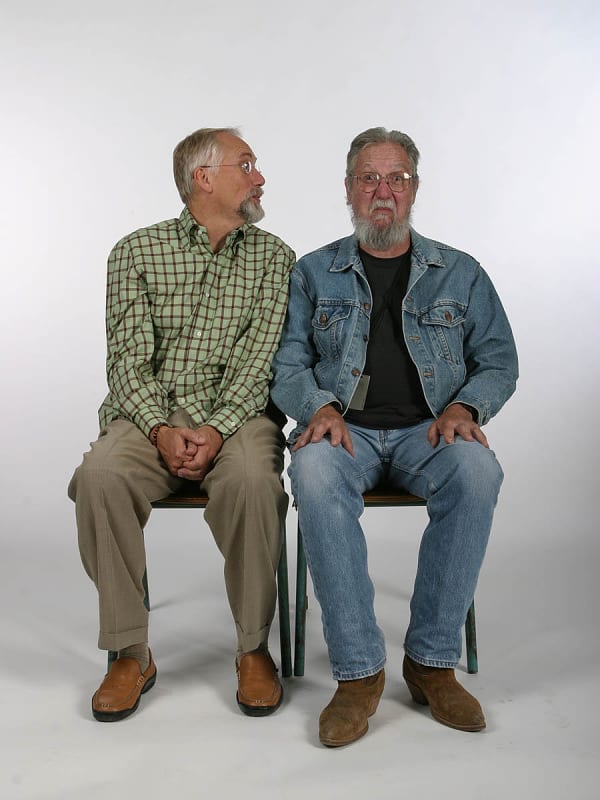 Wieden + Kennedy noticed that Nike had previously been focused on producing ads only from the perspective of the top of the pyramid. But their research had found that professional and college athletes as a group only contained about one million people, whereas the fitness universe was at least 150 times larger.

They came up with a campaign within a month due to the campaign needing to be done before the summer of 1988. They knew how they wanted to tap into the wider market and the core of this campaign was going to be the tagline. A tagline that would resonate with everyone and anyone.

Everyone has a body and is therefore a potential athlete.

It was Dan Wieden himself that actually came up with the tagline for the campaign. I left a clue/hint at the end of the first paragraph of this article as to how he came up with it. When asked he stated,

I took inspiration from the last words of a convicted murderer, Gary Gilmore, who said “Let’s Do It”.

Thus, the "Just Do It." campaign was born. 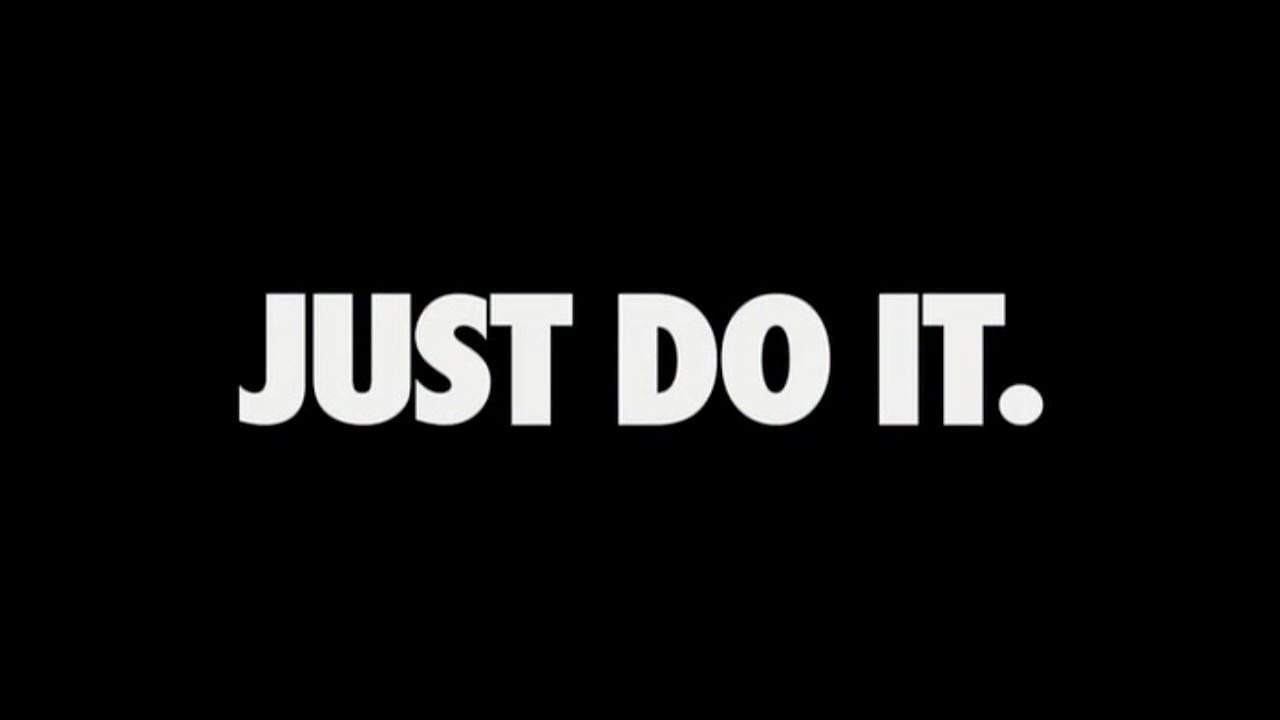 The outcome of this campaign really does speak for itself as Nike is by far the largest sporting brand in the world and has been for quite some time. It would be lazy of me to just end the article here though so let me tell you some things you may not know.

The campaign started in 1988 and was heavily run alongside sporting celebs and everyday people through to 1998. In that time Nike went from sales of $877m to $9.3bn. The style of the tagline was adopted by many brands going forward. Even the late Steve Jobs, who was friends with Jerome Conlon, is believed to have taken "Think Differently" for Apple from their inspiration.

When Nike released the campaign it was a huge success in bringing in an all-encompassing demographic. Young and old, able-bodied or not, "Just Do It.". They didn't sell an image, or a product, as both of those may not resonate with various groups.

The Nike Swoosh (not tick) is based on the goddess Nike's wings (It makes more sense when you look at the image below). The co-founder Phil Knight wanted them to be incorporated into the logo and brought in Carolyn Davidson, a graphic designer. She was paid $35. 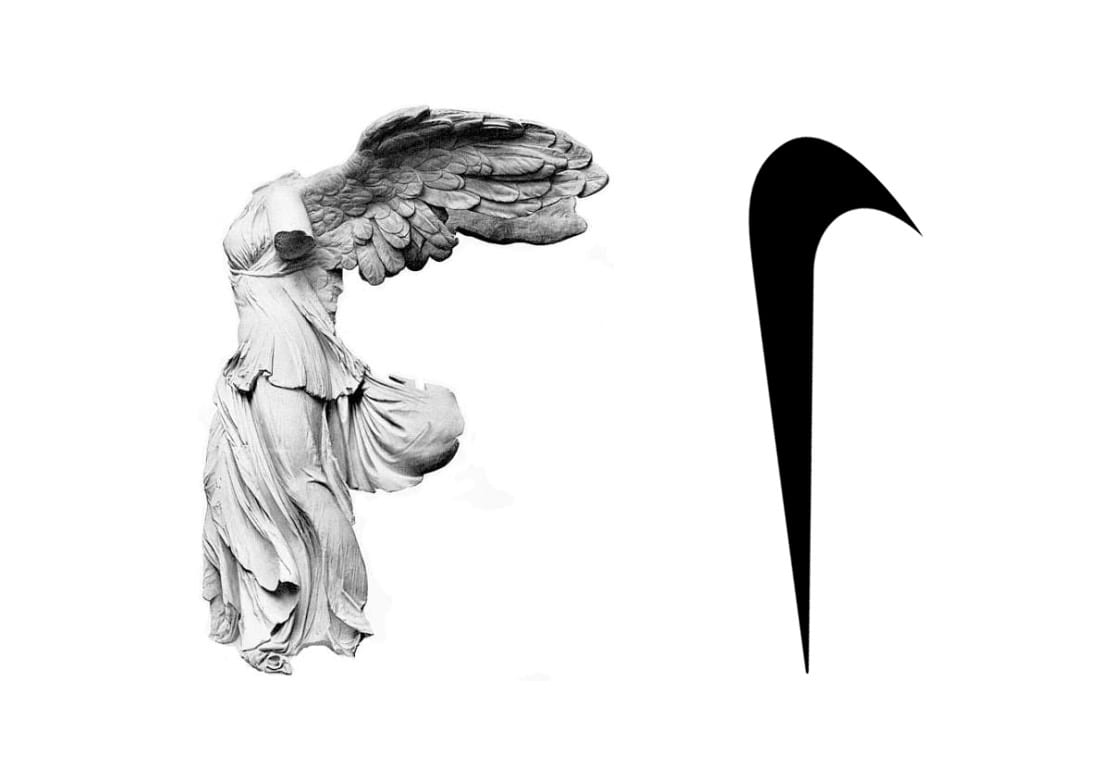