Do brands need to be controversial to be socially responsible?

Following the Gillette and Nike controversies, is it possible to showcase your brand's attitudes to societal and political issues without backlash?

Consumer mindset has evolved and we are now more conscious of the things that we are buying and the brands we are buying from than ever before.

With more than half of Britons thinking that brands have a responsibility to society, they can no longer simply rely on having a well-performing or cheap product offering to entice customers. Brands increasingly need to showcase their attitudes towards society in their marketing strategy, but is it easy to do without causing controversy and disrupting the status quo of your audience’s buying habits?

This guide helps you explore the fundamentals of developing powerful authentic brand stories. Narratives demonstrate product or service applications, strengthen loyalty, and establish your brand as a trusted ‘thought leader’.

The start of 2019 has already seen companies hit the headlines for good and bad reasons - often the same company - for addressing societal issues.

Greggs, for instance, gave a masterclass in public relations by capitalizing on trends. On 1st January, when most people start on a health kick and look to change their food habits, its vegan sausage roll announcement on the back of Veganuary saw its follower numbers skyrocket, as you can see below:

Its efforts to appeal to a wider group of people saw its followers grow but it did cause nationwide debate, with some criticizing the company for its latest invention, including everybody’s favourite critic, Piers Morgan:

The negative impact of Greggs was just a drop in the ocean compared to others in the past year. Notably razor brand Gillette, which created an advert that tackled the culture of toxic masculinity and how it can be hugely damaging to men. Changing its famous slogan from "the best a man can get" to "the best men can be", its advert offered the brand’s perspective on the male social issue that has had everyone talking.

When it was first released, people shone a positive spotlight on the brand and its efforts to ignite conversation but, a few days later, something changed and people started finding flaws in the new message.

Cue a massive backlash on social channels with people stating that Gillette was putting all men in the same negative category.

The advert has since been seen by more than 29 million people on YouTube alone, yet it is also one of the most disliked videos on the video sharing site, making headlines across the world. Currently, more than one million people have disliked it.

The hashtag #BoycottGillette was soon trending, with some claiming the brand was "dead" to them and many others taking pictures of themselves binning their Gillette razors.

Brands should not tell people how to behave. Yet with an Edelman report finding that nearly two-thirds of consumers want companies to take a stand on social issues and the "me too" era taking over the conversation in all industries in the last two years, was it not a positive thing that Gillette was adding to the conversation?

The advert has drawn both criticism and praise, and Gillette has even pledged to donate $1 million per year for the next three years to non-profit organizations. But advertising has to reflect society in this day and age, with the rise of the "belief-driven buyer" who can change their buying behaviour based on the brand’s stance. Just take a look at SeaWorld, which took a massive backlash after the documentary Blackfish was released. This had an impressively negative impact on the company’s reputation and it faced an 84% drop in net second-quarter income.

So, has it been a bad thing for Gillette? In short - no.

Maybe it’s not such a bad thing to divide a country if your intentions are good and exposure for the brand has been huge. It’s happy with its sales and just take a look at how word of mouth of the brand soared after the launch of the advert in stats obtained from YouGov. 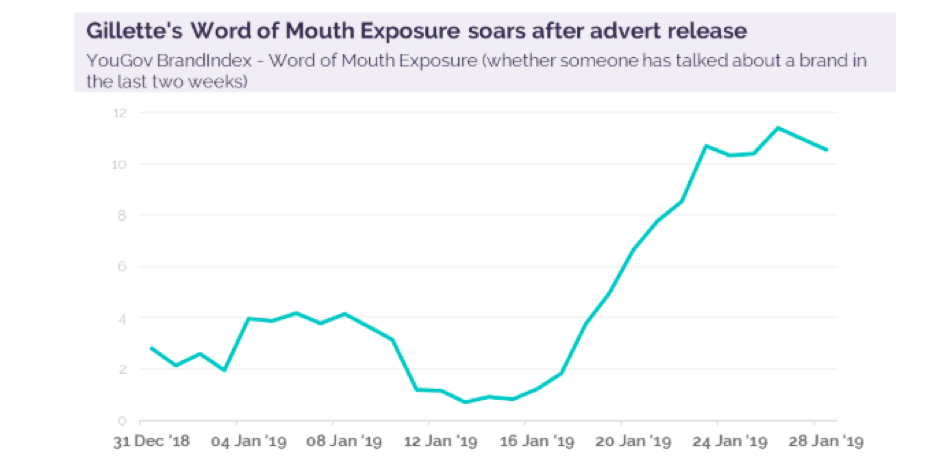 Kaepernick is an American football quarterback who refused to stand in games in 2016 during the US national anthem as a protest against police brutality and racial injustice in the country. Kaepernick subsequently no longer plays in the National Football League. His actions prompted input from president Donald Trump who called on the NFL to fire players who protest the national anthem. 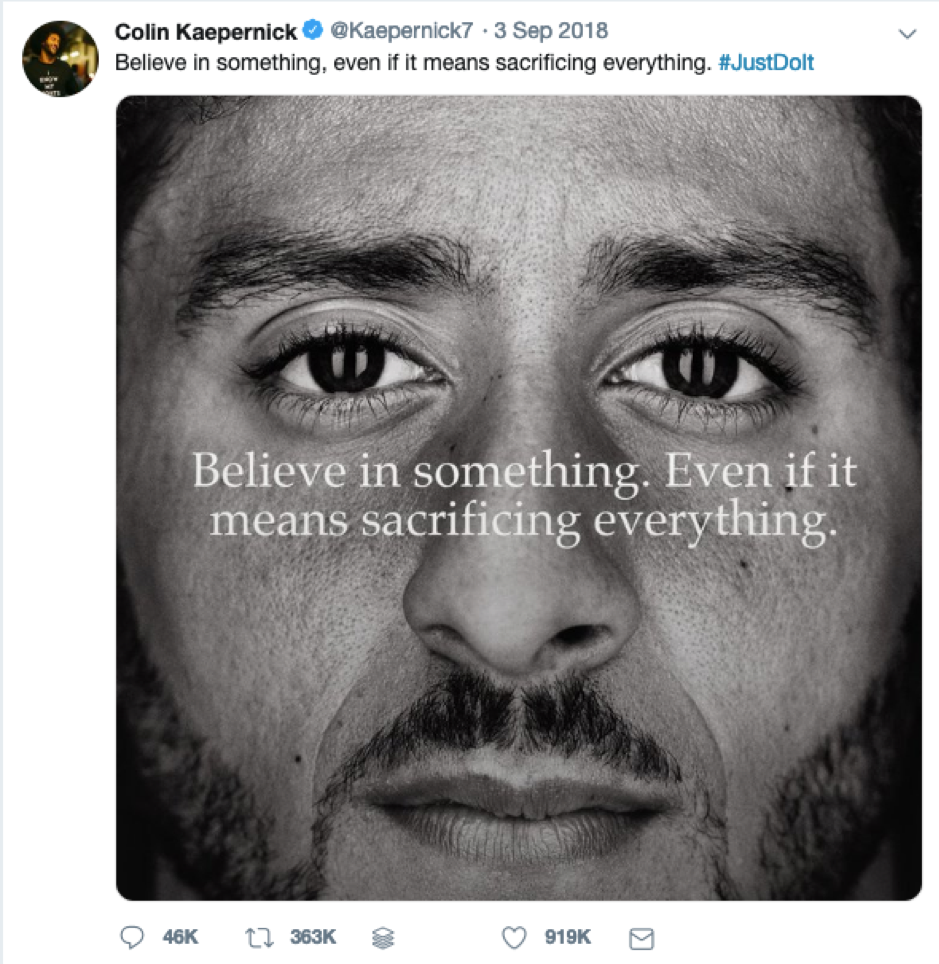 Following his actions, Nike debuted a new advertising campaign in 2018 with Kaepernick’s face with a slogan that said: "Believe in something. Even if it means sacrificing everything." This signified the brand’s stance on the issue and implied that it sides with Kaepernick. The ad received praise but also similar backlash to Gillette, with hashtag #JustBurnIt doing the rounds on Twitter, a play on Nike’s popular slogan Just Do It.

Trump again weighed in, saying "I think as far as sending a message, I think it’s a terrible message and a message that shouldn’t be sent." Other popular figures, including country singer John Rich, tweeted pictures of them cutting and burning Nike merchandise.

And yet… Nike has seen a $6 billion increase in value since the advert. Yes, it was a massive gamble and people were divided, but it built conversation, raised its profile and showed Nike as a socially active brand. Gamble? Yes. Win? Definitely.

Ben & Jerry’s has been socially responsible before many brands even considered it. Since the 1980s, the popular ice cream company has supported a number of important causes tied to making ice cream, including Farm Aid. The company also created the Ben & Jerry’s foundation, which actively encourages its employees to give back to communities.

Has it faced backlash for any of this? Not really. All of the above is hard to criticize, but the media has naturally put more of a spotlight on the way that its employees work and where its ice cream comes from, but that’s about it. It did, however, face some backlash for its anti-Trump ice cream flavour - Pecan Resist. 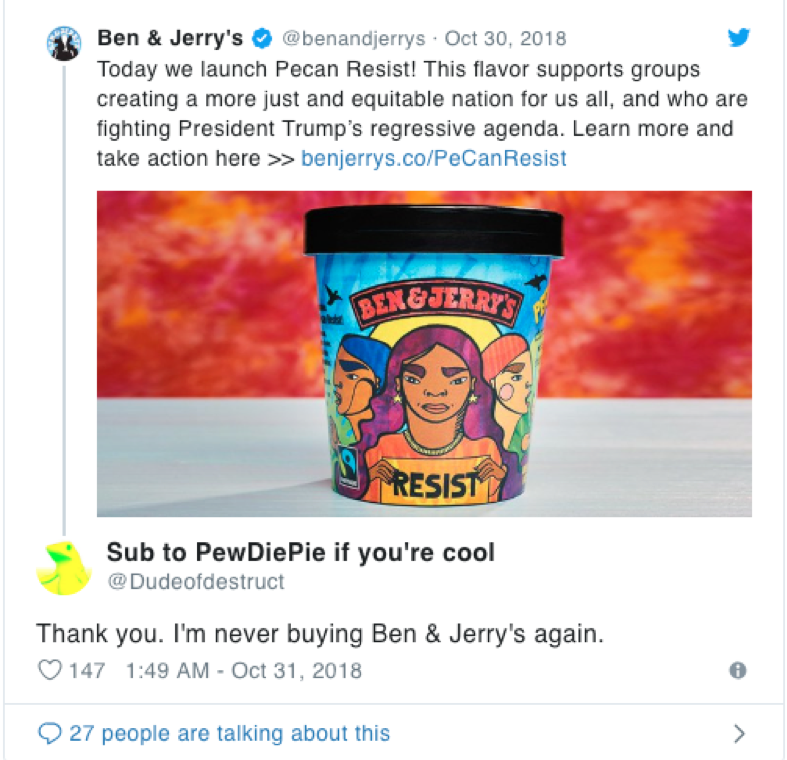 Brands will never be able to support or criticize a political party without upsetting someone. But in a world where the voice of the people drives brand buying power, politically-charged messaging can be effective when done sensitively and with support.

By speaking out, brands cause controversy. Yes, if you donate and do things privately, you will cause much less controversy, but even brands who donate to a cause get a spotlight shone into their operations by the media, almost as if they are looking for a hole in their story.

Being socially responsible should not cause controversy every single time. But everyone has different opinions, if we didn’t life would be very boring. Often, you will have someone disagree with your statement - it’s just the way that the world is. Brands may lose a few customers, but word of mouth is precious in PR terms and can really increase audience awareness and, in the long term, customers.

There is often a toss-up between showing your values and increasing profits. Brands shouldn’t aim to be socially responsible simply to increase profits, but consumers have an easily accessible option to change where they purchase things. For example, many people choose makeup brands that don’t test on animals, shunning popular cosmetic companies. They make decisions based on the brands’ stance on relevant topics, so ultimately profits do benefit.

If a brand does not cater to changing topical times, they will ultimately face falling behind their competitors who are seeing the benefits and doing it for themselves. Brands definitely don’t have to be controversial to be socially responsible, but it definitely helps their audience awareness efforts if they are.

Rebecca Peel is a Digital PR and Outreach Consultant at Hallam, devising and implementing creative content strategies to increase her clients’ online visibility and gain high-quality backlinks, helping them to be more successful online. Rebecca’s background is in technology and business PR. Before joining Hallam in 2018, she managed international clients and travelled overseas to promote brands and devise newsworthy campaigns in Sri Lanka, Croatia and Germany. She has gained coverage for her clients in national and trade publications such as The Times, Daily Mail, Information Age and Insider Magazine.