Coca-Cola’s creative genius – what can we learn? 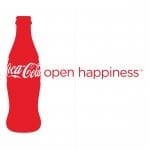 I'm a fan of marketing that thinks, before it does. And, if I am honest, tired of "digital" marketing that focuses on channels and moving media spend without addressing the real strategic challenges, without putting the customer, and so integrated marketing, first.

It's why I posted recently about meaningful marketing and brands such as Dove, I think wherever brands are seeking to genuinely connect with the consumer, commercial success will follow. If brands act in a commoditised way, expect commoditised results.

I'd like to have seen the presentation from Coke's VP of advertising strategy and content excellence, Jonathan Mildenhall, at Cannes, titled #WorkThatMatters - it looks great. Plus, I've become somewhat of a Mildenhall fan-boy since Coke's 2020 vision was revealed a few years ago - see my post on that here. I can really buy into marketing that's striving to be bigger than the product itself, as with Dove, naysayers might claim it's manipulative and just another form of advertising, for me it attempts to create the win-win between the brand and the consumer, earning and inspiring consumer trust and attention, and I cannot fault that. The Small World Machines campaign claimed almost half of Coke's Cannes awards. It's clearly a great piece of marketing, you can see the summary of the campaign below and some detail here on Coke's website.

Coke's doing what they've always done here, delivering world-class, creative excellence, but in a way that's never been more relevant to modern marketing, recognising that 30 second TV slots and agency-led advertising creative is no longer the primary focus that it once was. Coke use advertising of course, heavily, but that advertising spend is used creatively to amplify bigger, richer ideas.

Rather than dissect the Small World Machines idea or any of Coke's other work, there's a nice case study here on Coke Zero from last year too, I wanted to get an idea of Jonathan Mildenhall's recipe for creative success. I dug around and found the lecture below, from 2010 and have summarised what I took from it.

Creativity is fundamentally important to business

What a fantastic quote to start of around what the real purpose of creativity in marketing is. And in a content marketing era, it's a brilliantly relevant quote. Creativity changes things, it's so often overlooked, even today with big brands. It's so often perceived tied to an agency or a specific role, but it's not about a role, a type of person or a the right type of FMCG business. It's more important than that. The responsibility for creativity and creative marketing therefore lies with everyone irrespective of who leads the agenda - we all need to bring creative and innovative thinking to our organisations.

Creativity pays, that's something I hugely enjoy the thought of. It turns out that the 'creative fancy stuff' has a strong commercial purpose and drives tangible share-holder value. Bloomberg report the correlation to creativity and commercial success through their '50 most innovative companies', companies the drive forwards and innovate are the most successful commercially. The message here? Get used to hearing "no" in your organisation and make ideas happen.

It's interesting and obvious how creativity starts and ends with being people (audience) centred. It's intuitive, focussed innovation - people centred. That includes people within your organisation and your consumers. Bringing more people into that process is probably the real insight to boost creativity and ideas generation  of course it needs to be a process, or at least a managed chaos! Should you consider bringing in new people from other worlds, people who bring different lessons and experience to your team and brand? The right agency partners can do this, it's certainly a primary driver in how our clients at First 10 perceive our value.

Coke's take on why creativity matters…

This is so important when you have a product that does not get re-invented. Unlike consumer apparel brands like Nike or PUMA, a bottle of Coca-Cola largely remains the same, the liquid and packaging is fixed. The only thing Coke can change is the means and method of communication. They have to innovate outside of the product itself. This is what makes them fascinating to me, and Red Bull too, I guess it's also what makes them able to afford to 'over-invest' into marketing in both cash and board-room level focus?

Coke's work creates desire, so that people want to literally wear the t-shirt. It's not flippant, inspiring brand love is strategic aim and you can see that, it drives commercial success too since if someone buys two bottles instead of one each week then that's a lot of incremental sales. The insight behind Coke to drive a 'happiness' agenda is the genius behind it. A loftier consumer aspiration than refreshing bubbles - which a number of other products can offer me. Open Happiness - wholly owned by Coke.

Coke had to invest to follow new trends and develop new ideas - Coke Zero shows that as a product extension. But so does the way that they've had to rethink marketing through their 2020 vision. That's a long way from TV and outdoor advertising led marketing.

Coke's recycling capabilities - from zero to hero in 5 years - form the basis for some powerful story-telling in the market. The fact that they combine that story into something the design-led Coke buyer can rave about through the emeco 111 chair, made from 111 recycled bottles drives the point home. Saying you're a sustainable brand is one thing, doing it and enabling the story to get to market is another. Hats off.

Creativity can be harnessed

Steve Jobs is famous for saying he wanted to design things, even buttons, that look so good that you'd want to lick them. Coke stepped into the vending space with that driver and created a new drinks dispensing unit that will sell 112 different Coca-Cola drinks, the iPod of the drinks industry?

Ideas need to seductive enough to travel, irrespective of geography, culture and economic success. Big fat fertile ideas are at the centre of Coke's 2020 vision.

And, it never stops. The new bar is only there to be bettered by you or somebody else in your industry. I guess you get to decide which it is. As Mildenhall says, "Creativity is behind every leap in science and marketing".

"We use our 'BBA process' to create culturally relevant brands… we must do more than give people refreshing products to buy, we must also stand for positive cultural changes that people want to buy into". Jonathan Mildenhall, VP of advertising strategy and content excellence, Coca-Cola

It's seems a moot point in a digital era, that your consumer is editing generic, rational messaging out of their lives, brands instead need to strive for bigger, culturally relevant ideas for their busy consumers to buy into. Mildenhall states that this is not about £'s, you can lead a cultural conversation on-pack - Innocent are a great example of this. Those culturally leading ideals can create significant value for brand owners and help brands carve out leadership spaces.

"The Coca-Cola company's powerful position in the global market place affords us the opportunity and the responsibility to create positive change in the world. Every employee needs to help ensure that each of our brands succeed in a way that makes the world a better place" Jonathan Mildenhall, VP of advertising strategy and content excellence, Coca-Cola

I am not convinced that sugared water does the above without damage to society, I don't think that filtered and bottled water achieves that either. However from a pure marketing stand-point, making marketing drive value in and of itself, that gives something back makes perfect sense and is hard to argue against. Mildenhall's example is Fanta, which generates orange playgrounds for deprived inner city areas under the Fanta 'play on' message. Investing in local and run down areas does show the brand living the ideals, over 30 second TV spots, and logically is far more impactful from a marketing stand-point.

The simplicity of the graphic undermines the work I imagine goes into enabling the summary, though it's useful to see it. Apologies it's a little blurred - it's the best resolution from the video... 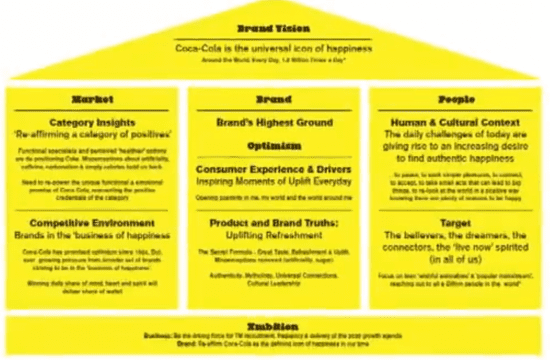 Mildenhall says that all Coca-Cola brands then ladder up to the bigger business mantra of 'Live positively' - a business wide statement of intent that umbrella's everything the drinks giant does.

The video closes on what I think is the secret sauce for Coke's content machine and campaigns such as the 'Small World Machines'.

# 2 Create meaningful roles for products to play in every piece of IMC (integrated marketing communications).

There are 4 product roles: functional offering or benefit; object of desire; embodiment of an attitude; and social connector.

"Sometimes the role of the product in our advertising is neither meaningful or credible. Before signing off… ask yourself 'can this story be told without mentioning the product' If so… don't do it" Jonathan Mildenhall, VP of advertising strategy and content excellence, Coca-Cola

Big fat stories and fertile ideas... but not without a clear role for the product.

#3 The creation of exceptional communication ideas

I suppose this is why Coke have large creative teams, in-house and also their agencies. Exceptional ideas are not born of one person, they born of provocations and consumer insight, and a process that drives that big, fat fertile brief for the talented to pick up and answer.