I’ve been taking a look at some of the latest examples of integrating print with digital through ads and statistics of action code usage in the US.  You may know action codes as QR codes, but we're increasingly seeing Action codes used as a generic term for this direct response technique, since QR codes, although the dominant form of action code are technology specific and there other options such as Blippar and Microsoft Tag.

Nellymoser, Inc., a mobile marketing and technology services company, has some interesting insight on the use of action codes in magazine advertising. To understand how these mobile action codes are being used in magazines, Nellymoser surveyed every issue of the top 100 U.S. magazines by circulation in 2011 and the first six months of 2012. I use the term “action code” since although this accounts for up to 85% of codes used in magazines, there are others notably Microsoft Tag, the second most popular and in the UK Blippar.

So how are action codes being used by marketers? Nellymoser have a useful report for publishers and advertisers based on an analysis where they scanned every code, activated each campaign, watched each video and completed actions requested for the mobile campaigns.

These were the most common marketing actions: 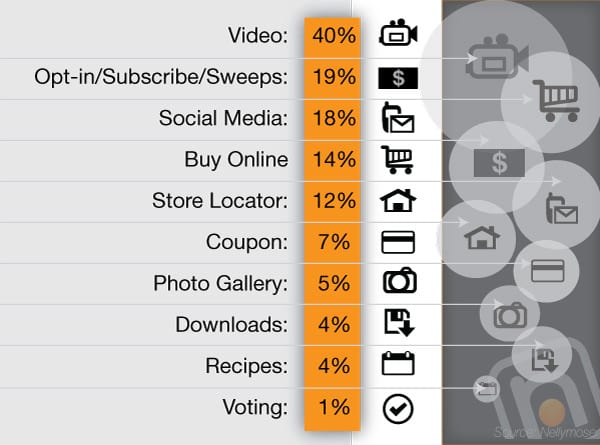 I was surprised to see video was the highest - I don't think that is the case in the UK and Europe. I've included a couple of examples later in this article.

Nellymoser's analysis shows that most action codes were used for one or more of the following four purposes:

1. Branding and Demonstrations. The largest usage for action codes was to showcase a video (35%). These videos are often created specifically for mobile use. Examples include:

2. Data Capture and List Building (Opt-in / Subscribe / Sweepstakes). Action codes are effective for building databases because readers can respond immediately and wherever they are reading the magazine.

“Smart Sweepstakes” are used to increase scan rates. After a user scans and enters information, the smart sweepstakes retains the user’s entry data from one scan to the next, enabling instant entry and reducing the obstacles to form submission.

3. Commerce (On-line Store, Brick-and-Mortar Store Locator, Coupon)
Readers can immediately scan and act on a desire to purchase. Links to a corporate e-commerce store led the category at 21% followed by in-app store locators at 11%. Some store locators used the phone’s built-in GPS to find the nearest location.

4. Social Media
Action codes were also used to enable Facebook, Twitter and to connect to email. In Q1, 18% of codes enabled readers to share a video link or product information via social media. (NOTE: Only social sharing that was part of the mobile campaign was included. Some video campaigns led to a YouTube Channel, which in turn has a social sharing feature. These were not counted.)

The September issue of Seventeen features more than 250 mobile-activated photos and Seventeen-branded icons. Readers may use Seventeen Shopping Insider’s built-in scanner on nearly every fashion or beauty image within the issue’s editorial pages, then save the images to the app’s shopping list. Select editorial items and advertisements feature a Seventeen-branded shopping bag icon, which unlocks discounts, freebies and sweepstakes such as $10 off a purchase of $50 or more at Aéropostale, 20% off full-priced items at G by Guess.

In another example of a “content-to-commerce” venture Adage reports that Harper’s Bazaar has introduced “Shop Bazaar” a website owned by the magazine that features apparel and accessories from its pages, part of magazines’ accelerating push into e-commerce and broader effort to diversify revenue. See our post on consumer QR use for information on how QR code usage varies in different countries.