Wondering how to get started with QR codes? Our guide showing the marketing applications and campaign examples 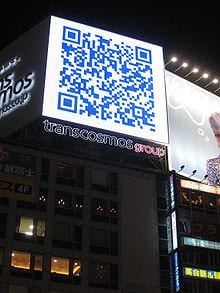 Late last year Nielsen predicted that smart phones will be the dominant device by the end of 2011, so there's certainly a reason to be taking this area more seriously.

What are QR codes?

Firstly, in case you're not 100% clear on what QR codes are - QR - 'Quick Response', originally invented in Japan for tracking components in factories.

In short, they offer a method of effectively adding web based content, a URL really, to real-world messages, objects or locations. So they're great for integrated campaigns to offer a digital offer and drive engagement with a brand, ultimately leading to interactions on a website, social site through the mobile.

The novelty is the way your phone scans and "clicks" to access the content, so they're inherently tied to smart phone usage. Any user with a smartphone will need to do a one-time download a free application which makes use of the phone's camera, but other than that you're away.

Note that there are several variations of code too, so choose a widely adopted one like Jumpscan, EZ code (big in the US) or the original QR Code by Denso in Japan. Different code types require a different reader.

The applications for marketing are quite vast and pretty obvious when you think about it - you can even create your own QR codes easily enough, as explained by this this post last year on Mashable.

So to get started, we suggest asking the right questions as for any campaign rather than jumping onto QR for the sake of it:

Remember to assist users with what to do, QR codes or 2D barcodes are still new enough that people will likely need a little direction as well as a good enough reason to give it a try.

Our top 7 applications for QR codes

There many decent blog posts (just Google "QR code examples") that illustrate a lot of uses of codes and will give you to food for thought, some are not so creative, but sometimes the simple functional campaigns are most effective - think QR codes on business cards, sorry that's really mundane!

Here's a list of the top applications that I feel have the best combination of practicality, cost and impact:

The common theme here is that QR codes make rich and relevant interactions possible, and they do it, well, quickly! You (the brand) get the opportunity to add value to the consumer or prospective consumer, they're not only about exploiting the opportunity of a "great offer" that you might want to make 🙂 Could be worth trailing something soon since the time maybe now for the best combination of novelty factor and consumer awareness as to what they are.

Having spoken only today with the marketing team at PUMA, they were explaining how they're implementing QR codes as part of a new product launch taking place at the London Selfridges store. The team are doing a great job of demonstrating the use of QR codes to provide in-store engagement at the launch a new designer range of range of PUMA menswear by the designer Hussein Chalayan.

As of Friday 4th Feb 2011, Selfridges will have a new installation that leverages the story behind the designer range, utilising over 50 decorated poles bearing individual QR codes taking you to different web content, each telling a part of the story behind the range, in this case it's various cities around the world that Chalayan has drawn from to create the range.

Kate Hasse, Lifestyle PR manager at PUMA UK, comments that "the goal is to bring Hussein Chalayan's design inspiration directly into the Selfridges store, to help provide a much richer experience for the consumer and immerse them in the new range."  What's more, the team are placing 1,500 co-branded cubes 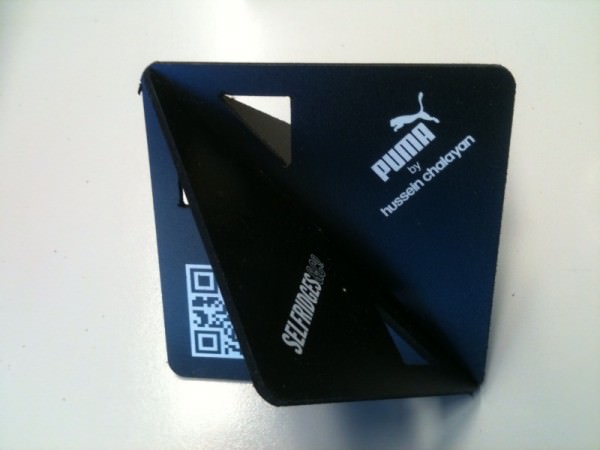 around Selfridges and nearby parts of the city throughout February, the cubes use a different, shared QR code for passers by to scan, these take you to PUMA's YouTube page which is currently promoting the launch at the Selfridges store and some information about the range.

Clearly this implementation could be done to varying extents at any store, so whereas the flagship Selfridges is a notably serious interior design installation, you could easily utilise a lightweight implementation in other, less prestigious stores. It's the bringing of the story (web content) into store that's neat, and also trying those QR codes as a means to generate in-store foot fall.

Another example of a QR code marketing campaign

Here's an example of a QR code campaign for business travellers in the US from Curio Consulting. We like this because:

However - there is no clear connection of the offer with the service which is a fundamental flaw! 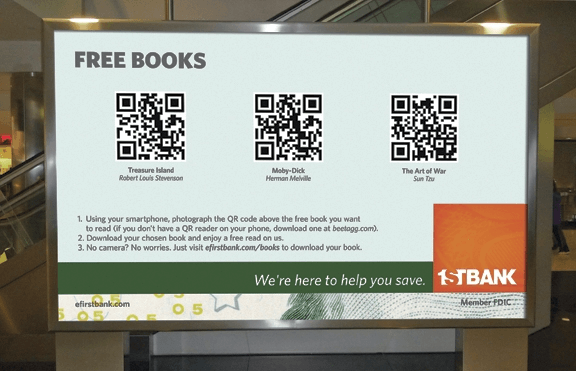 Let us know of any examples of QR codes that have grabbed you!