Chrome triumphs on desktop, but Safari on mobile

If you're a marketer or designer you'll be aware of the dramatic change in browser use since Google introduced Chrome. This compilation from the US from Adobe Digital Index's report clearly shows the change across the most popular browsers, across desktop and mobile. Is it no surprise that in 2014 we have seen a crossover so that Google Chrome commands the highest share, as us consumers are spending more time in the 'google ecosystem' through our Gmail accounts, Google hangouts, and Chrome and Android browsers default to google search - we can't escape it! 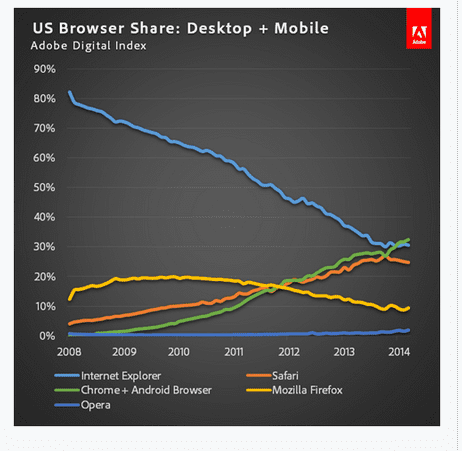 However, Internet Explorer and Safari are still at similar market share, so as Craig Sullivan points out in his post on 17 ways to F**k-up your AB Testing - many sales can be lost because designers ignore older versions of these browsers, especially IE8 which can account for a significant number of users. This compilation of browser market share on W3Schools, a site used by web designers shows that Chrome has now reached 60% for designers.

How does the growth pattern look for other countries, this graphic charts the growth of Android and Chrome across countries showing that many countries are ahead of the US and UK in Chrome use.

So which browser is most popular on mobile in the US?

As expected, with the popularity of Apple iOS, Safari is much more dominant in the US, followed by Android and Chrome. 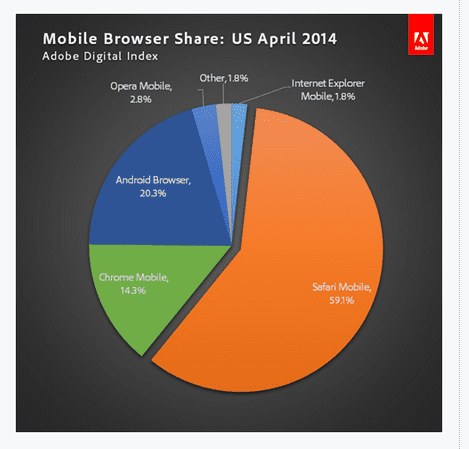