How the iPhone changed marketing forever

120 months ago on the 29th June at 09.41am (California time) the world changed forever.  Six months after being introduced at the Macworld Convention by Steve Jobs, the $499, 4GB storage iPhone was finally in stores.

Since then, over a billion iPhones have been sold globally. In 2007 Apple had $6bn in cash. Today the company’s accounts are reportedly in the final stretch to being valued at $1trillion.

But things could have turned out very differently. Back when the iPhone wasn’t even a glint in Steve Jobs’ eyes, telecoms giants like Verizon held a tight grip over the specification of handsets. Weighty manuals read like a bible of ‘thou shall nots’. Such restrictions went against everything Jobs believed in.  It certainly wasn’t a sector that he wanted to get into.

Some three years before the iPhone said ‘hello’. A team of Apple engineers were fiddling about with touchscreen technology on an interactive surface that was the size of a ping-pong table. They didn’t have a clue their ping-pong rig would eventually help redefine everything people understood about Alexander Graham Bell’s invention.

The engineers showed the technology to Apple’s Design Chief, Jonathan Ive. Recognizing its potential, he presented it to Jobs. Initially, the boss wasn’t that smitten. But eventually, commercial circumstances helped nurture the idea until touchscreen technology wizardry grew on him. At the time, the iPod was Apple’s lead product. Yet, Jobs realized that its days of serving as a cash-cow were numbered.  He worried that other companies could start working on a mobile phone able to play music – leaving the iPod redundant and takings thwarted.

Apple’s brightest engineers set to work on figuring out how to miniaturize the touchscreen technology, as well as develop an operating system and… fit everything into a neat device.  The project was code-named ‘purple’.  Engineers worked 24/7 in a sectioned-off part of Apple HQ named the ‘purple dorm’. (It was said that engineers were bringing in takeaway food and sleeping wherever they could lay their heads, the atmosphere in the purple dorm was more like a purple haze).

One of their fundamental tasks was to figure out how to incorporate a touchscreen keyboard. Numerous iterations were considered. Complicated shape swiping was dismissed as simply too difficult to learn. Eventually, one engineer combined AI (Artificial Intelligence) with a standard keyboard layout which predicted words. It was one of what would turn out to be many ‘eureka moments’.

Every aspect of project purple was unremitting. Demands were intense. Hundreds of engineers sacrificed weekends, holidays and, in at least one reported case, a marriage.  When the patent for the original device was eventually awarded only 14 people were listed as designers. But, in truth, as with so many breakthroughs, delivering the iPhone called on the cooperation of many more who remained behind the scenes.

The iPhone that almost wasn’t

The name iPhone did not originally belong to Apple. Infogear used it in 1998. Their Linksys iPhone appliance combined a standard phone with a web terminal. In 2000 Cisco Systems took over Infogear. The company rebranded the appliance, Linksys VoIP. Apple’s own branding of the iPhone led to a conflict with Cisco Systems – which was eventually resolved.

Apple’s iPhone wasn't the first handset to include iTunes. The Motorola ROKR beat them to it in 2005.  But following Apple releasing the iPod Nano, Ed Zander, Motorola’s CEO relented asking,

“What the hell does the Nano do?  Who listens to 1,000 songs? People want devices that do more than just play music. Something that can be seen in many other countries with more advanced mobile phone networks and savvy users.”

“A widescreen iPod with touch controls, a revolutionary mobile phone and a breakthrough internet communications device.      (Steve Jobs’ original description of the iPhone).

Apple also had to tackle the business community’s addiction to Blackberries. (Also known at the time as the ‘crackberry’). Sales Warriors loved the device’s keyboard. Apple’s solution was the first to market to consumers and then gradually win over the business sector by making iPhone much more than an individual’s phone.

Whilst the original iPhone had no third-party apps, GPS or even a means to record video, with each new model, the device gradually led to the demise of having to carry around lots of devices. Its all-in-one technology made serious dents in the sales of compasses, stopwatches, calculators, diaries, maps, voice recorders, answering machines, portable games consoles, newspapers, alarm clocks, point-and-shoot cameras, GPS units, camcorders, PDAs and even Apple’s own iPod.

One year after its debut, the introduction of the App Store led to 2,200,000 apps featured as instant downloads.  (According to app measurement company App Annie, Google Play Store currently carries 3,400,000 apps).

For now, more Android system devices have a far bigger market share than IOS, but thanks to clever marketing and luxury pricing, IOS sales are still very comfortable. By 2018, Apple is expected to sell 241 million phones, compared with Samsung’s 404 million. (Canaccord Genuity).

In 2016 the risk of Samsung Galaxy Note catching fire halted a serious escalating threat to iPhone sales.  New phones from the likes of Huawei, Sony and OnePlus with even more sophisticated features than currently offered by Apple could yet damage sales. 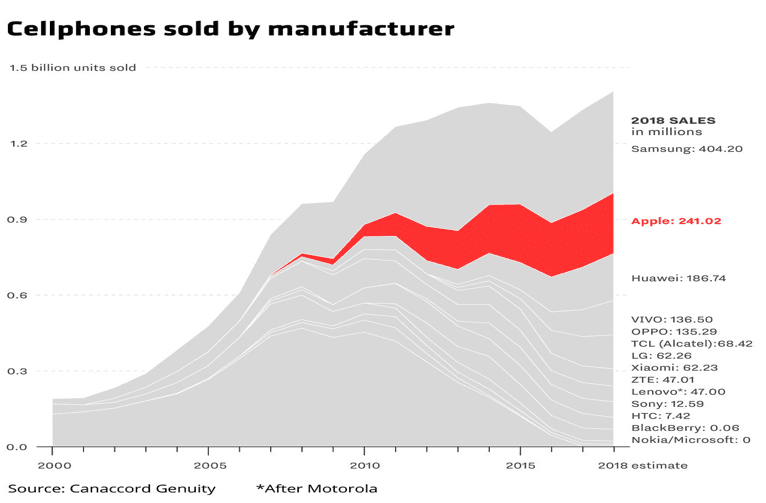 Whilst many celebrate iPhone’s tenth birthday, they also await its 16th iteration, to be finally officially revealed in the Fall. Only after then will Apple’s CEO Tim Cook finally know whether all the fuss over blowing out birthday candles turns out to be little more than hot air.

How iPhones helped change more than you thought…

Everyone is always on

Once upon a time... in an age long, long, long, ago you could wait up to ten minutes to get onto the web. Now everyone is connected instantly either via Wif-Fi or cellular networks.

People are so transfixed to their phones that traditional last moment point of sales purchases at checkouts like chewing gum have declined by 15% since 2007.

The ‘sweet and sour’ of everyone’s mobile lives - accessories - including Bluetooth speakers, headphones, cables and docks are ubiquitous.  ABI research estimates that revenue in the global mobile accessories market will top $110bn by 2021.

More people are watching TV and getting their news via mobile phones than ever. 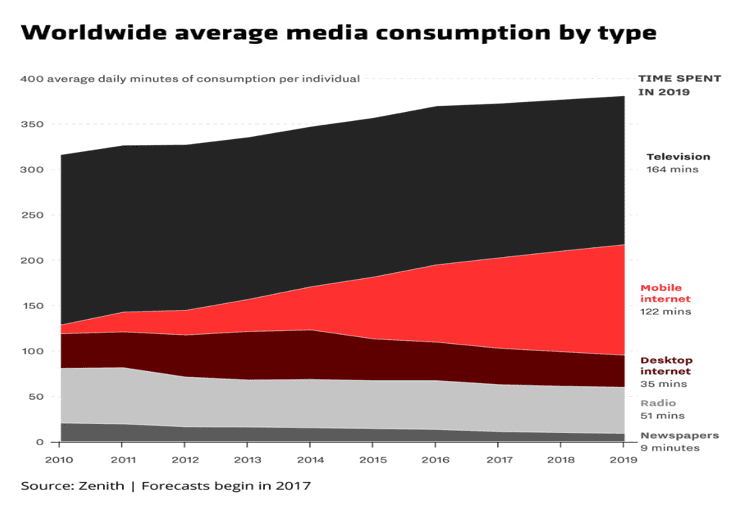 According to tech futurologist Benedict Evans, there will be more photographs taken this year alone on devices like iPhones than during the entire history of photography.

In 2017, following an analysis of 2.5 million selfies on Instagram, researchers discovered that more than half fell into the 'appearance category' – images that describe the person's outward status and wealth. (The selfie movement is mostly driven by women and the 18 to 35-year-old age group).

Broadcasting lives in real-time around the globe.

Thanks to video conferencing software as well as services like Periscope and Facebook Live, potentially more than half the world’s population can become ‘live tv’ broadcasters, sharing everything from local brawls to cute pet moments.

Seven of the top ten grossing iPhone apps are games. 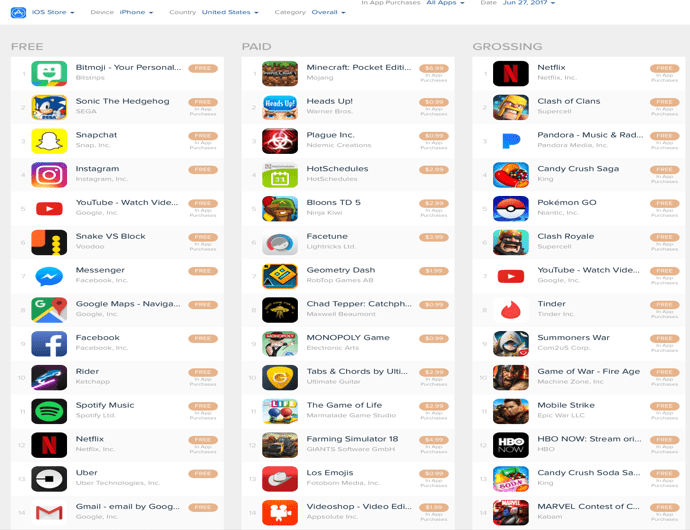 ADHD has soared. Attention spans, especially for children, have plunged. In addition to school teachers feeling despair as they try just about anything to retain students’ attention, the dramatic fall in attention spans has also fundamentally changed communications as practiced by virtually all business sectors including news media, entertainment, recruitment, professional training, journalism, marketing and advertisers.

The psychology of reciprocity has gone into overdrive as brands lure consumers into revealing more and more of their private information in return for incentives like free taxi rides and retail discounts.