Mobile advertising
Chart of the Week

Chart of the day: Research has found customer are twice as likely to recall ads, when they are exposed to those ads on multiple devices

Research by On Device found increased brand awareness, increased recall and increased "top of mind" awareness when the ad creatives were exposed to users across multiple devices.

This is very positive for advertisers, as the increases when customers saw the ads across multiple devices are large, even if it's overall not surprising that seeing an ad multiple times increases awareness. The scale of the increase is higher than expected, specifically for brand awareness, going from 12% on a single device to 21% on multiple devices. 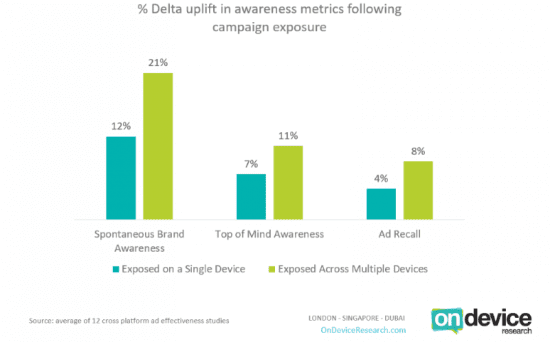 The research has also found that ad fatigue is increasing in on-demand tv.

Over two in five respondents said that seeing fewer ads on paid tv and on-demand services, compared to watching "normal" TV, encourages them to pay for on-demand TV services.

What does this mean for advertisers?

Your ads should be shown across laptops/ computers, mobile devices and tablets when you're setting them up in Google AdWords, Facebook Ads (or other platform and providers) if you want to increase brand awareness and engagement, which should also help if you're pushing a special offer. It's not just the amount they see the ad, it's seeing the ad across devices that helps.