Chart of the day: A third of British people will exercise their right to be forgotten after GDPR comes into force on May 25th, 2018.

The research, conducted by media agency The7stars, found that a third of British adults plan to exercise this right after the European Union General Data Protection Regulations (GDPR) come into force.

The survey was conducted with over 1,000 UK residents and found that 34% want to use the regulations to stop companies from using their data for marketing purposes. Data protection and privacy are clearly quite big concerns for customers.

The right to erasure of data applies to marketing data where there is "no compelling reason" (according to the ICO) for the data to be held for longer and is not required for processing, or in other words, it is no longer needed based on the fact the individual may not be using that service anymore (for example).

Less than 2 in 10 (19%) believed their data was being used in the “best possible way" and 58% questioned the amount of data that businesses currently hold.

Three quarters (75%) think it's the responsibility of the job of the government to state what GDPR means for customers and for businesses.

GDPR is being welcomed by customers, 58% are positive about GDPR, saying it's a positive step forward.  32% also say they will trust brands with their data after GDPR is in force, so it's not bad news for businesses.

In a previous post, we also report on a study which found the US is going to be compliant before the EU is. This is shown in the table below, which is taken from the blog post. 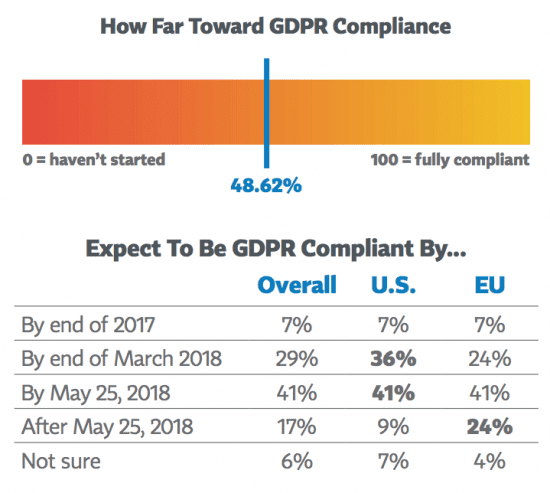 How to write great research questions

Six steps to writing research questions that get the best results Eureka! You’ve got an idea for a business, product, service, or new functionality, a solution to a problem, or a hypothesis about why something is happening. Unfortunately, it’s a …..

Using different insights tools to build an understanding of the opportunities for an agency to create value for a client In a previous article, I defined and explained the need for marketing agencies and consultants to develop a robust Discovery …..