Useful tips for working with micro-influencers

Why would you want to reach a smaller audience? Why not go from the big guns from the start?

Are you looking for a more efficient way of promoting your business online and reaching your target audience in a meaningful way? In my Quick Win for Smart Insights, I teach you everything you need to know about working with micro-influencers, including creating an influencer marketing strategy and tips for finding the right influencers for your campaigns.

If you’re interested in learning more about how to create a micro-influencer marketing strategy, check out the Quick Win here.  You’ll get to learn:

So, if you want to learn how to get started with a micro-influencer campaign, you can find the Quick Win here. In the meantime though, here are some useful tips for working with micro-influencers:

But first…what is a micro-influencer?

There are all kinds of ways to categorize social influencers, like in this infographic with 10 types of online influencers, which are categorized based on their posting style and their online activity; however, there is also a more general way of categorizing them – i.e. based on their audiences’ size.

Micro-influencers, as you may have gathered right from their name, are influencers that have smaller audiences – the consensus being that they tend to have under 100k followers on their social profiles. They can have as little as a few thousand or they can have 100k – the number isn’t that important, at least not compared to their influence over their audience.

So, why would you want to reach a smaller audience? Why not go from the big guns from the start?

Well, as it turns out, for many brands micro-influencers have actually proven to be more effective than huge influencers. For example, in this case study from HelloSociety it was found that working with influencers with under 30k followers can outperform in every category:

What makes micro-influencers so special and effective is, in many respects, specifically about their audience size; a smaller audience size can usually means a more targeted audience and it also means more direct engagement. Kendall Jenner, for example, might have close to 90 million followers on Instagram, but it also means that her audience is very fragmented (from people passionate about clothes to people following just because of her popularity) and that she won’t have the time to respond to comments consistently and actually engage her audience.

Read on for some useful tips to help you get started with your influencer marketing campaign:

Don’t judge an influencer on vanity metrics – i.e. their follower numbers. In fact, that might just be the least relevant statistic you should concern yourself with when researching influencers. And if it’s reach you’re looking for, then simply work with multiple influencers at the same time.

Instead of focusing on follower numbers, look instead at their audience first, and then at their engagement stats.

The idea when working with a micro-influencer is that even though their audience might be smaller than what you’d want to reach, it’s actually so relevant and targeted that the conversion rate will be much higher than if you’d worked with a bigger, but less relevant influencer. 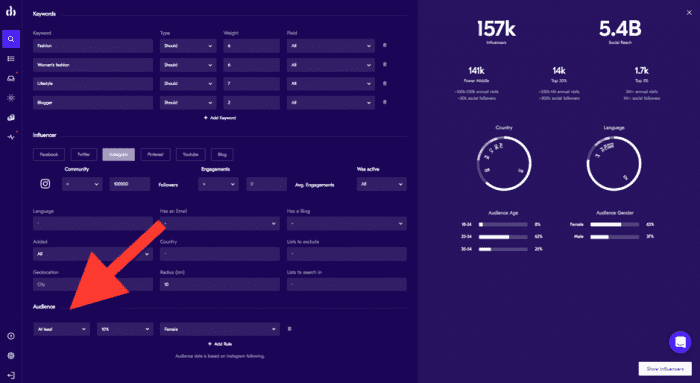 This is especially important if you operate in certain areas; influencers are very likely to have a global audience so it’s important to make sure that any influencer you target has enough audience from your city or country.

How to set up a micro-influencer campaign

The following Quick Win is for business owners and marketers who want to learn new and efficient ways of promoting a business through micro-influencer marketing, generating brand awareness, driving more traffic, and boosting leads and sales.

Another important aspect to finding social media influencers is their relevancy to your business; even if you share a similar audience, they might not be creating and sharing content that is directly relevant to your business.

And that is a problem when your campaign would seem inauthentic to their audience; for example, if you’re selling cupcakes and targeting food bloggers, you can’t use just any blogger with a good audience – some might focus on specific foods, other might be only about savoury meals, and so on.

This is easy to do by following them on social media and their blog or other digital channels; plus, you can look at this as an opportunity to establish a relationship or a connection with the influencer before actually reaching out.

You can also use a tool like Buzzsumo to help; for any influencer you find, you can quickly see a list of the links they shared as well as a snapshot analysis of these links (the top domains shared, their favourite topics, etc.):

Plus, you can also search for influencers based on the content they shared, either by keyword, or by website domain.

Once you find social influencers that you’d like to work with, it’s a good idea to establish a connection with them first before reaching out to them to discuss a collaboration. This is especially important if you want to build up to a longer lasting campaign with the same influencer, or want to turn them into your brand ambassadors.

When you want to reach out to the influencer, try contacting them via their direct email as it will massively improve your chances of success.  Use a tool like Lusha to help you find their correct emails; download the Chrome extension and find the influencers’ profile on Twitter or LinkedIn to look up their contact information:

In your initial email, be friendly and show them that you are familiar with their work – and a fan of their work!

Let the influencer do their thing

When working with influencers, it’s very tempting to tell them exactly what you want them to do.

However, it’s important to remember than influencers are popular with their audience because a couple of reasons: their audience trusts them and they love the content that they put out.

Inauthentic content simply will not cut it with audiences – they’re more likely to turn on the influencer about promoting something so blatantly, rather than go buy the product they’re promoting.

Whenever working with an influencer, listen to their input over the campaign – and don’t be afraid of their sincerity. For example, Emily of @myhealtyishlife, a micro-influencer, worked with Adidas to promote one of their shoes; in her Instagram update promoting the shoes, she admitted she didn’t think she’d like them much – but, she ended up loving them and generating close to 500 likes and 38 comments on her post (and around 15k followers in total), most comments praising the shoes:

So, whenever working with an influencer, brainstorm content ideas with them and let them be authentic and create the kind of content that their audience is expecting from them.

Have you tried working with micro-influencers yet? If not, now is definitely the time – not only are they more cost effective, but they can also lead to better results overall and more conversions.