Improve your content marketing strategy now with our free resources

Are you ready for the fourth wave of content marketing? According to Scott Brinker:

“the fourth wave of content marketing, now emerging, is the proliferation of interactive content with responsive web marketing apps.”

In Scott’s ebook, The New Brand of Marketing Scott argues that marketing is now a technical discipline where art gives way to code. Whereas that might sound like a huge leap, it’s got to be worth hearing out and this article introducing it is a great read, I’ll summarise and expand on this below. 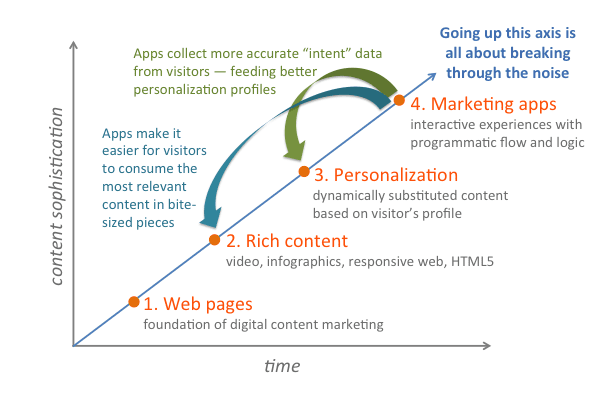 So what are the three waves preceding this?

We know content marketing is pretty popular and interest in it has grown dramatically in the last couple of years…. 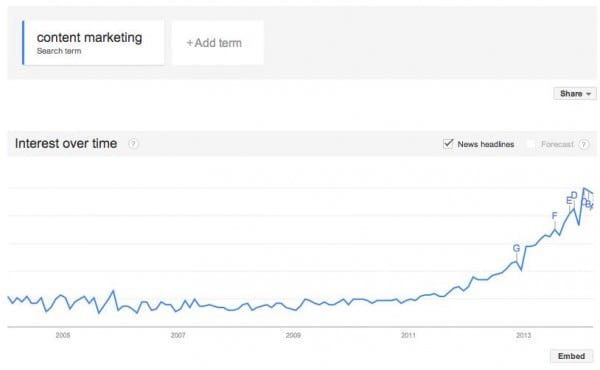 So what’s the story of the first wave? If we agree to share the waves view that in the chart above? The first wave is the birth of owned media, at least from a digital perspective. Companies essentially publish as much as they wanted on their websites, and pretty quickly evolving blogs, basic online media platforms and of course social media. But let’s be clear about the “first wave” we might credit much as originating much earlier, that wave being 118 years old and credit John Deere (yep, tractors) with its media publication The Furrow - the truth is things change, but they’re not as radical as you might think. Imagine The Furrow in 1895 - a branded journal “for the American Farmer.” Now that was new. Either way we might agree that the first wave, all 118 years of it, was largely text. Eventually the same text Google made currency in the late 1990’s. Giving way for that text to underpin search engine optimisation, link building and inbound marketing. 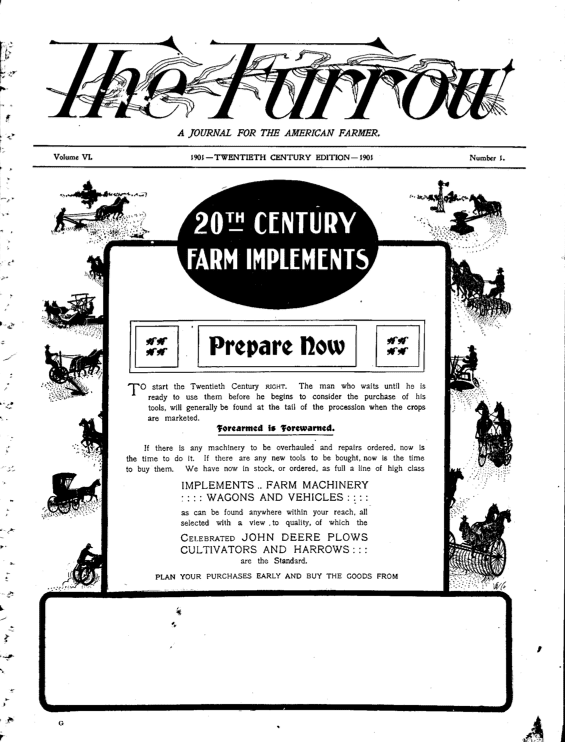 The second wave? You might guess in light of the popularity of YouTube and infographics is rich media including videos, graphics, slideshares and crafted ebooks. I concur with Scott that rich media is behind the success of branded content in social media marketing and a slow move away from relying on search engine optimisation - our content needed to get smarter - shorter, more visual and less taxing to take in. We’ve certainly witnessed a pursuit of crass re-tweets, comments, shares and Likes - very often for the sake of vanity.

The third wave, the current wave according to Scott - shares a common fact with the first two in that it’s still passive, the audience still consume it, the third wave is around personalisation, the focus now is helping audiences to combat the sheer scale of noise that now fills social media, indeed the Internet. Programmatic marketing (which more often means advertising) or personalisation holds much promise, and it requires data about prospects in order to make educated guesses about which content is right for them, is that data that enough brands have? We’re more likely to have that at the bottom of the sales funnel (customers) than at the top (prospects).

Which leads us to the fourth wave - where ‘marketing apps’ will create interactive experiences with programmatic flow and logic. Do you agree? 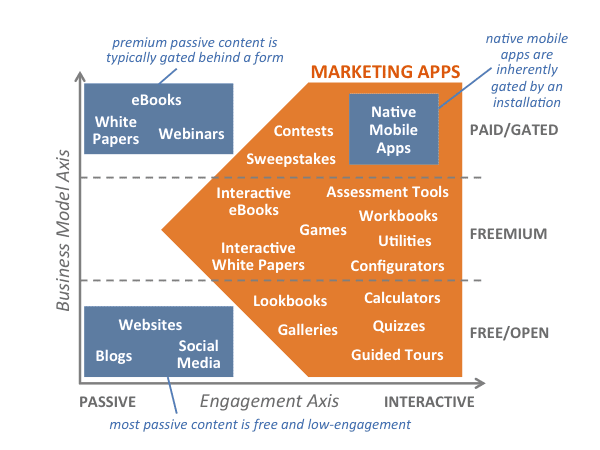 What I like about Scott’s idea is that what was passive content is brought alive - it becomes interactive - we might have the same content but re-worked, smarter, so that it provides a values add for the user. We have long since referenced such tools in our content marketing matrix here: 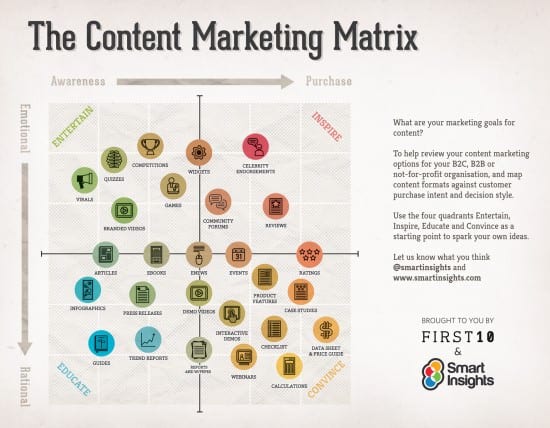 We have seen this already - of course, the popularity of marketing quizzes, assessments and polls is some distance from new. Look that the tech companies, like Wildfire, that flourished on the Facebook platform.

There’s no question that apps can be powerful lead tools, my own experience of a ‘freemium quiz’ for consumers looking to teach English abroad was created whilst working within TUI Travel in 2008, 6 years ago. The bespoke built ‘TEFL Taster’, as it became known, enjoyed consistently high completions rates and delivered lead volumes way about that of standard downloads and passive content. It was, and I understand still is, the marketing team's most powerful lead tool because it added value to prospects - it delivered the most rich and immediate experience of the service and delivered a tangible reward for minimal effort. 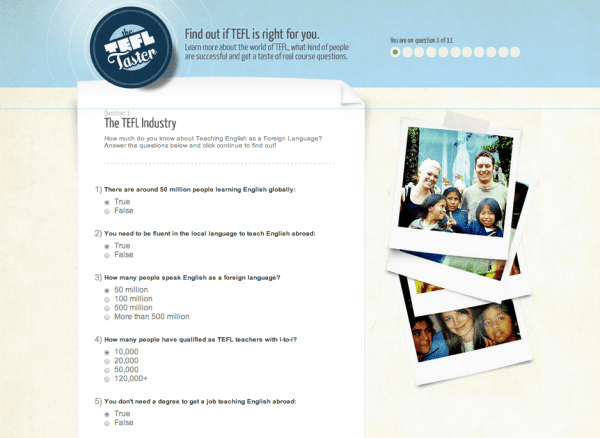 ‘Experiences’ is it all about tech?

Whereas I’d agree with Scott about the evolution of content marketing and a heading towards creating consumer experiences - I am not convinced that experiences means tech, necessarily, or that it’s that linear where a wave disposes of its predecessors to easily or must even build on its predecessor. We might say that Lego has only this year done the most successful piece of marketing ever with the Lego movie? And, before them Red Bull with the Art of Flight, amongst other epic ski and snowboard films. Do they not provide experiences, and what of the events industry - again let’s stick with Red Bull on the slopes of ski resorts the world over that gave rise to the X Games? These are rich brand experiences - no app in sight.

The point though is sound, as our poll showed, content marketing is growing, ever more popular and arguably - as Seth Godin once said - marketing’s last stand. 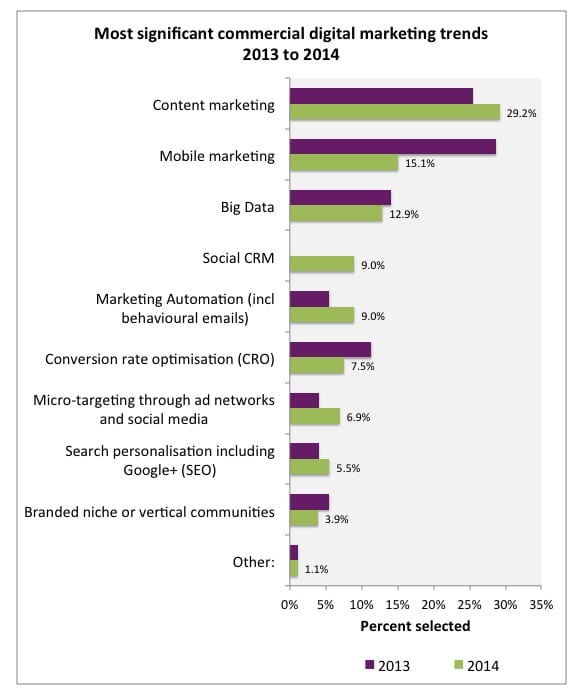 I do agree with Scott that users demand experiences - this is the opportunity for brands. It’s our duty to dial up the production quality - I don’t feel it’s purely about technology at all. Tech is one powerful tool. Humans still enjoy passive, to ‘veg out’ in front of a great movie, to just watch and be entertained. To feel. Marketing apps becoming important and more affordable - absolutely no question - but they’ve got to be fit for purpose, they’re not fit all. And underneath it all - as Scott says “observing prospects interact with marketing apps can feed valuable data into personalisation algorithms to better tailor other content offers to them,” this is the key insight to promote investment in your team - marketing apps have to walk a very careful line of serving the marketing function through data capture, and serving the consumer through improved experience, and ideally the latter comes first.

With every company keen to climb Google’s search rankings, it is easy to lose perspective by simply churning out fresh content that seizes on the zeitgeist or otherwise meets current demand It is difficult to overstate the importance of evergreen …..