Instagram and advertising. It seems to be causing quite the stir as the Instagram user-base has already made it clear that they don’t want to see the platform commercialised by Zuckerberg. For example, late 2012 saw Instagram’s terms of service change and then change back when users objected to the possibility that their photos would be used in ads.

Whereas Zuckerberg may struggle to easily monetise his Billion Dollar investment, the reality for brands is that they don’t need to wait for advertising to gain exposure in Instagram, they need some imagination. There are a number of brands doing this already and surprisingly, Instagram users seem to love them for it.

A number of brands have adapted well to the nature of Instagram and its users, appreciating that ‘exposure’ comes with adding value to the Instagram community, not trying to interrupt it. Companies like Nike, Mercedes Benz, Red Bull, Converse and Ford have all conducted one or more campaigns with users. Corporate interest in working with the best  photographers on Instagram has even seen an agency create a department to focus on facilitating just that. Maybe this starts to show how Instagram can generate income for itself, its users and also corporate clients?

So who’s doing a good job and can provide us a little inspiration? Here are three to help get you thinking and one to show when response and reaction gets flat - if you’ve seen better examples then please share in the comments, I'd personally love to know more…

Nike recently began inviting users of the popular photo sharing site to take part in its NikeiD campaign, which lets users design, share and (should they wish) even purchase customized versions of Nike footwear.
The web application enables Instagram users to select their favourite Instagram shot as a background for the Nike Air Max model of their choice, the shoe is then customised based on the colours in the photo. Users can elect to share the shot over Instagram, Facebook and Twitter, as well as via browse the designs of other Instagram users. It’s admittedly not world breaking, but does demonstrate that it doesn’t need to be complicated either. Wondering if it’s worth it? Nike has amassed more than one million followers and more than six million photos with the tag #Nike on Instagram, that makes Instagram a useful platform for the brand, no question.

Undoubtedly a force in the social media, let alone marketing, world – and famed for having their own media arm producing cinematic and simple engaging content largely focused on extreme sports. Red Bull is now working in Instagram, posting their own images as well as source user-generated content from their fan base. 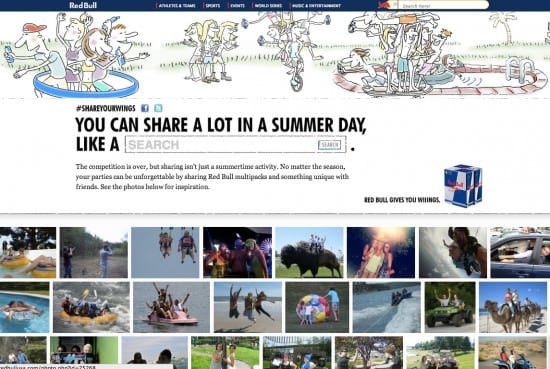 Red Bull naturally uses multiple hashtags that represent different types of content, such as #FlyingFridays, #GivesYouWings and now #shareyourwings. Red Bull also created a campaign hub, enabling fans to share Instagram photographs via the #shareyourwings hashtag across Twitter, Faceook and Tumblr in exchange for free products, which is what makes this interesting. User behaviour that drives brand footprint gets recognised and rewarded, neat? 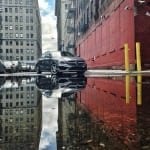 My favourite, and the most recent that I’ve seen is Mercedes-Benz USA (@mbusa) - they’ve commissioned five top Instagram photographers (each with circa 500,000 followers each) to spend a week driving the brands newest and affordable luxury car, the CLA. The Instagram user with the most likes at the end of their week with the the car gets to keep it for three whole years. In addition to this, a sixth Instagram user will also be selected to take and photograph a similar trip starting early September.

They’re bringing in those photographers’ entire communities and followings, and Mercedes-Benz is increasing its reach and virality and connections beyond hoping its fans just share stuff. 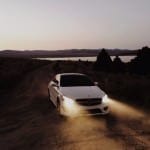 That’s exactly how MBUSA saw it. "Usage, consumption and engagement is even higher than on Twitter, so it seemed like the perfect platform to meet this new audience for the CLA… This is a great example of knowing that all messaging does not have be delivered by Mercedes-Benz on Mercedes-Benz ‘owned’ channels,” Mark Aikman, MBUSA

The MBUSA results?
- 90 million impressions: calculated by multiplying the number of photos of the campaign by the photographers’ followers
- So far, the campaign has garnered 1.5 million likes. Plus, of course comments

This is interesting for when it does not work, at least not that well. Converse, working with 23 Instagrammers, asked them to document their lives with a gifted Converse Canyon duffle bag over a four week period. Everything that they document goes into a single Tumblr and on Instagram, then onto a full exhibition in London. The measly follow count 6 months later doesn’t suggest it worked? Though the snaps from the exhibition show that a local crowd and lots of PR friends made it busy on the night? It just goes to show that even the big boys can get it wrong.

What are the take-aways here?

What say you? Any observations on the above and other good, or bad examples to share?