On-page optimisation
Chart of the Week

It was long thought that having the keyword in your domain name would help you in the SERPs. Is this actually the case?

Ahrefs have done some stellar research into the On-page ranking factors in 2016 and have found many interesting nuggets.

Back in 2012 Google rolled out an updated intended to bring an end to high ranking, low-quality Exact Match Domains (EMDs). Since then, the scurry to find high volume, keyword rich domains has somewhat diminished. But does have an EMD still impact the SERPs? 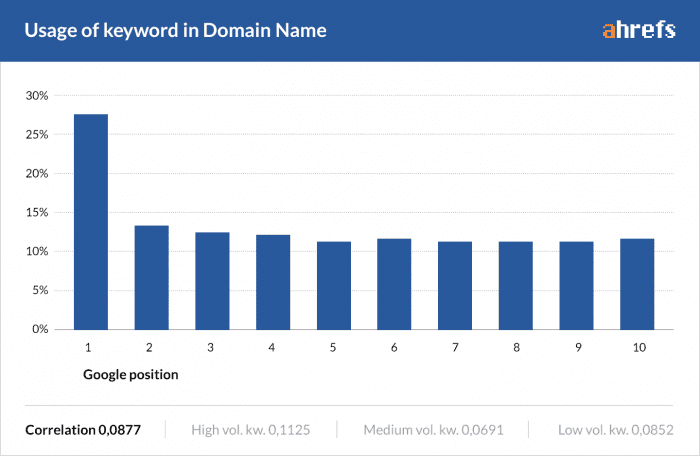 As evidenced in the data, there is a clear jump between position #1 and #2 which suggests that either the EMD update is no longer in effect, or something different is going on.

First of all, the phrasing used by Matt Cutts himself was "Minor weather report: Small upcoming Google algo change will reduce low-quality "exact-match" domains in search results". Which suggests that those "high-quality" pages that rank with EMDs were unaffected.

The guys over at Ahrefs have also offered their own reasoning behind this clear jump. They believe the jump caused by so-called "branded keywords". The example given "if you search Google for “addicting games” — you’ll notice that it’s actually a brand name for a popular gaming website, which ranks #1 for the term".

In terms of using this as a particular SEO tactic, is it something I'd look to implement myself? In short no. Although I believe EMDs are a ranking signal, it is one of such insignificance it isn't worth the stress/money/time.