How long does it take for a link to influence rankings? [#ChartoftheDay]

Link-building
Chart of the Week

SEO 101 states; the more* links pointing to your page, the better. But just how long does it take to influence the SERPs?

*by more, I mean more quality links and not spammy links obtained by blackhat techniques.

Kristina Kledzik, recently published an article on Moz about her findings after experimenting with some of her old posts.

She started by using some of her less-popular posts on Distilled (where she works) and set about picking out 76 links pointing to pages which are all similar to each other in content, and they didn't change that content (significantly) for 6 months. She focused on rankings for target keywords with a 25–35% Keyword Difficulty Rating (A Moz metric if you're interested) and she looked at two versions of their target keywords, so she could have a bit more data. 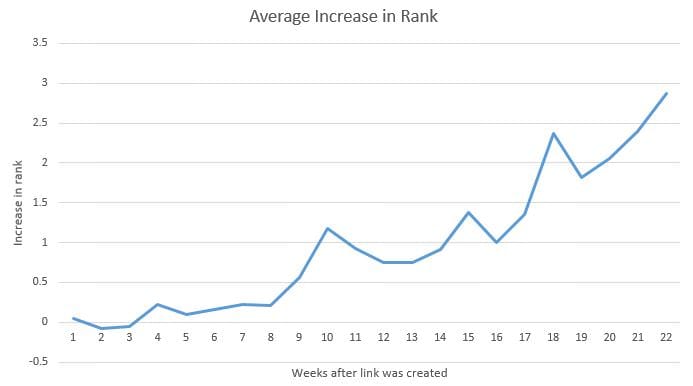 She discovered that, on average, it takes around 10 weeks for a page to see 1 rank jump. It seems that each link has a small to medium effect initially, before increasing over time.

It's almost as if Google doesn't trust the external link will stay pointing at the page, before giving it more authority the longer it stays pointing at your page.

The slightly confusing part for me in the graph is the peaks and troughs. My theory for this (which may well be incorrect so feel free to suggest otherwise in the comments below), is that once crawling the site and seeing additional links, Google immediately bumps you up the rankings before other ranking factors come into play. Ranking factors such as time spent on site & bounce rate etc, may then impact your page ranking and send it back down the SERPs.

Following from this, I'm guessing the other peaks are from new links being indexed by Google. Again following the cycle as previously alluded to, which explains the troughs after the initial spike.