A primer on multilingual keyword research

When working on keyword research, it’s easy to fall into the trap of thinking that tools will do the job of brains. Let’s clear that out from the outset: they won’t. Tools are only as good as their handlers. Give a spanner to a monkey, it’ll find ingenious ways to use it. Give the same spanner to a dog and it goes from tool to toy. We should use tools wisely!

There are countless tools dedicated to the daunting task of keyword research and there’s a growth in tools for multilingual keyword research. A promising trend, but we should never believe tools can replace the work of a native expert in a given market.

So often is the case a client will already have an English-language keyword list that they use and generate through translators into a target market’s 'language'. These translations are then put through various tools until the client finally believes there’s a multilingual campaign; but the task is not so straight forward.

Yes it’s about language, but it’s just as much about culture. We believe global keyword research will only truly be global if we identify and expose the various idiosyncrasies related to a given market. Different countries have different audiences, with unique dialects, languages, cultures and belief systems.

Above all, global keyword research should reveal the online search habits of a market – the same cannot be said of directly translated keywords.

Search intent – or customer intent? This directly affects success in any international online campaign. Before you start any keyword research ensure you understand the search intent landscape of your target market and its culture. A well-informed international marketing strategy, built from the ground up, is essential for campaign success.

Variations of a subject, product or item, are also endless and should always be taken into account. For example, while in most of France a sweet roll in chocolate is referred to as ‘pain au chocolat’, west-southerners prefer to call it ‘chocolatine’. This directly affects the flow of regional search traffic as highlighted below: 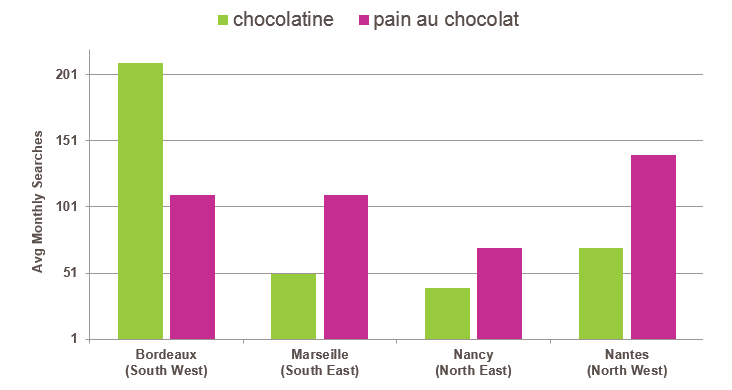 Another curious case is that of the Arabic language – spoken in some 27 countries worldwide. There are multiple ways to write a particular term in Arabic. Take this example from the work we did for our client, BBC World News: 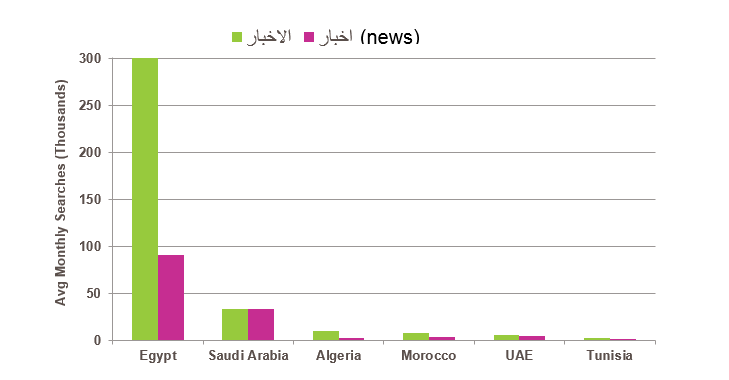 Both الاخبار and اخبار mean 'news' but different Arabic-speaking countries have different behaviour towards their uses. We can clearly see the difference in Egypt with 301,000 average monthly searches for الاخبار (news) and 30,500 for اخبار (news). This is a language analogy – but why don’t we spice this up with a bit of culture?

Some of these countries have a history of being French colonies. Let’s check this out. 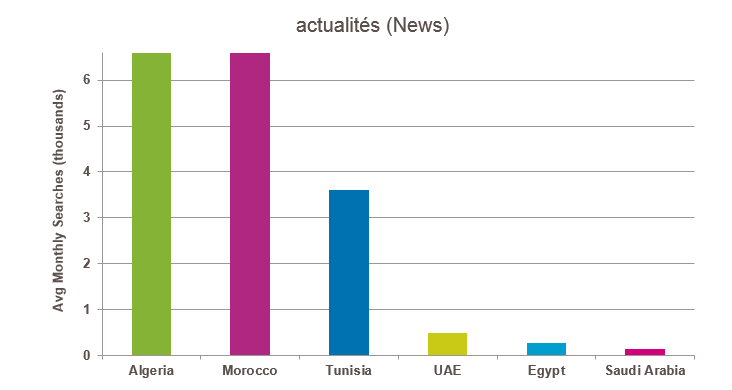 Actualités, a French term for 'news', has an estimated 260 average monthly searches in Egypt.  This volume becomes increasingly small when compared to ex-colonies of France: Algeria and Morocco both on average have 6,600 searches per month for 'actualités', while Tunisia  has 3,600 searches per month.

What’s weird is how the United Arab Emirates seem somewhat lost in this group of countries. That was the case until we looked at this from yet another angle: 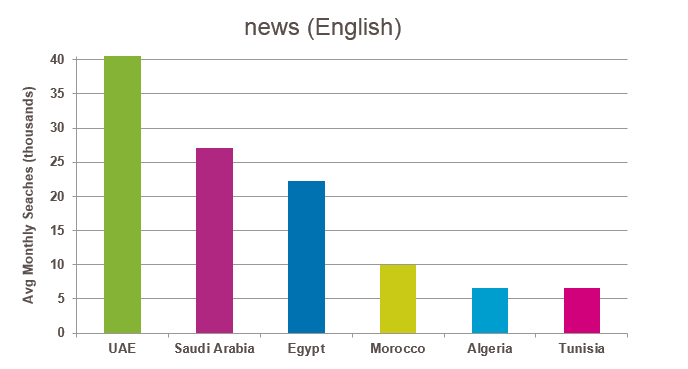 English is considered a predominant language in the UAE with 40,500 average monthly searches for 'news' – unofficially. But culture has little regard for pigeon-holing – and hence the insights.

When you dive into multilingual and international online campaigns, always analyse the targeted country from a holistic perspective. Take into account both language and cultural nuances (which are also partial to its historical background). The simplicity of a translated keyword list is enticing – we know – but it only skims the surface, if that.

Let’s look at another example; how about the terms 'tragamonedas online' and 'tragaperras online'. Spanish for 'slot machines' and the ambiguous ways Spanish-speaking countries interchange these terms. 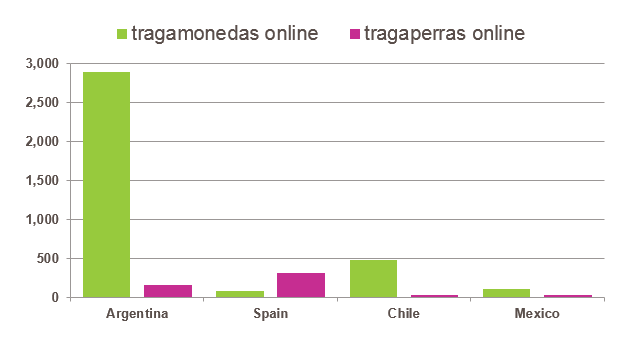 The graph above confirms that 'tragaperras online' is an inherently European Spanish term, with 320 average monthly searches in Spain, compared to 90 for 'tragamonedas online'.

The other variation 'tragamonedas online' comes out as the leading Latin American term, with a much higher search volume throughout the region; 2,900 average monthly searches in Argentina against 170 searches for 'tragaperras online'.

Translating implies a one-size-fits-all approach. It clouds vision by trying to average out cultural nuances that are detrimental to the success of any campaign.

As Benedict Anderson once said, 'a language is an imagined community' and here at Oban we firmly believe only native speakers who are still immersed in their own native cultures can really, truly dig out those exquisite jewels of keyword research and search intent. Keyword research should always strive to show us behaviour; and behaviour is a perpetual stage of change – something a list of translated keywords will never be able to do.

Thanks to Rafael for sharing their advice and opinions in this post.  Rafael Ribiero is the Global Digital Analyst for Oban Digital. He joined Oban in 2007 and has worked for a great variety of industries from retail to travel, all the way to financial and technology. Rafael is highly experienced in working with a multitude of languages, digital research and search data, having worked with clients such as Aberdeen Asset Management, Apple and NVIDIA. His knowledge covers all aspects of search data, which in turn is used to inform SEO, Paid Media, Content and Social Media. You can connect with him on LinkedIn.