Getting the seasonal celebrations right is a big part of aligning your brand with local cultural values and engaging with your audience during a significant time in their calendar. Gift exchange and shared meals are often a big part of festivities and for many brands that represents a big opportunity for sales. Get the holidays right and you have a chance to really bring your brand into every household. 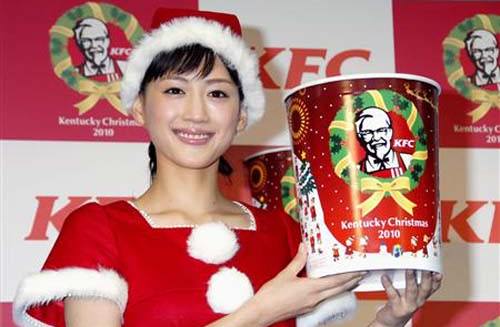 KFC is a brand that has managed to transcreate itself with particular success into Japan. The fried chicken retailer ran such a successful seasonal campaign in Japan back in the seventies that eating KFC is now a cornerstone of Christmas celebrations in the country.

Over the decades the brand has continued to repeat the simple message “Kurisumasu ni wa kentakkii!” (Kentucky for Christmas!) to stunning effect. With over a thousand branches in Japan, the chain takes order for the Christmas Eve ‘Party Barrel’ up to three months in advance and there are long queues at KFC stores on the 24 December. KFC is now part of the way Japan celebrates Christmas to such an extent that the national airline has even served branded KFC meals for 3 months in the run up to Christmas.

Other food retailers have offered their own take on local holiday customs. The mid-autumn festival (Zhōng Qiū) is one of the biggest holidays in China and Thailand and involves the gifting of mooncakes. Starbucks integrated into this food ceremony in their own way, offering their own twist in the Hong Kong market by offering flavours such as salted caramel.

In Thailand McDonald’s chose not to reinvent the traditional flavours and instead offers the durian andsalted egg flavour which only seems to appeal to the Thai palate! The fast food chain’s biggest twist on the tradition is more about the pricing – McDonald’s mooncakes are significantly cheaper than comparably-wrapped products from other retailers.

Coke boldly tackled the emotional themes of Chinese New Year with a standout campaign that reunited migrant families. This was a clear attempt to link Coke as successfully with Chinese New Year as it is linked with Christmas in the West (remember Coke helped popularise the image of Santa).

In Malaysia the brand achieved a 43% sales in increase by aligning itself with New Year festivities. Incorporating auspicious characters including ones meaning ‘happiness’ and other inspired by symbolic new year dishes into the label design meant that Malaysians were keen to give the bottle a place on their table during the festivities.

Beware the subtleties of difference

Just because your culture shares a holiday with another, it doesn’t necessarily mean your customs are the same. Beware of marketing your own version of a holiday overseas as your brand’s ‘accent’ may show most at these significant times in a cultural calendar.

In Serbia, Christmas is celebrated on the 7th January and it’s uncommon to exchange gifts on that day. Instead there are set days in the preceding weeks to distribute gifts to men, women and children on dedicated days. Any marketing you do needs to be aware of the pace of events like these.

In Brazil it’s too hot for a fur-trimmed suit, so Santa wears red silk. In Russia, forget Santa: it’s Father Frost who hands out gifts. Russians also celebrate Christmas on the 7th January. Since 1992 Christmas has become a national holiday in Russia, as part of the ten-day holiday at the start of every new year.

The Christmas festive season paces itself differently across different cultures: the UK puts out the seasonal decorations especially early but most festivities stop abruptly after the 25th December.

In the Philippines things also start early but the season carries on past Christmas Day with public holidays on both the 28 December and 6 January and additional religious occasions marked later in January.

Be aware that in many cultures (such as Spain, Mexico and Brazil) most of the big family gatherings take place at midnight. Don’t waste advertising money on campaigns for people who aren’t awake! Similarly, you should be aware of how much people start to wind down as a holiday approaches and avoid using business email addresses over holiday periods.

In some parts of Europe, such as Finland, you can expect the main celebrations of Christmas to occur on Christmas Eve, whereas in the UK it tends to be more about the 25th.

In Europe and parts of the Caribbean there’s a spike in seasonal activity on St Lucy’s day on 13 December, with Christmas decorations often displayed. Review the timing of your campaigns to accommodate the pace of the festivities and catch people at the right time.