Are you an Advertising Dinosaur?

Examples show why advertising still has its place

I am a dinosaur because I believe in advertising!. When I wrote my book, ‘Brilliant Marketing’ I spent little time writing on digital but when, three years later it went to a second edition I’d come to realise that digital and social media occupied a rather more important role in marketing than before.

But does this mean advertising is dead?

Maurice Saatchi of M&C Saatchi had a slightly morbid view himself when he wrote:

‘Sometimes I feel as though I am standing at the graveside of a well-loved friend called advertising. The funeral rites have been observed. The gravediggers have done their work. The mourners are assembled. Most of them are embarrassed to say they ever knew the deceased. ‘Advertising?’ they say. ‘I’m not in that business.’ At the age of 50, advertising was cut down in its prime.’

But he was wrong.

The media spend on pure advertising may be reducing but the energy, excitement and sheer clarity that advertising, when done well, can bring to a brand’s positioning can be laser sharp and deadly effective.

Example, from way back at an Agency of which I was CEO called FCO, the Araldite posters won many awards and press mentions.

Here's s the first of them: 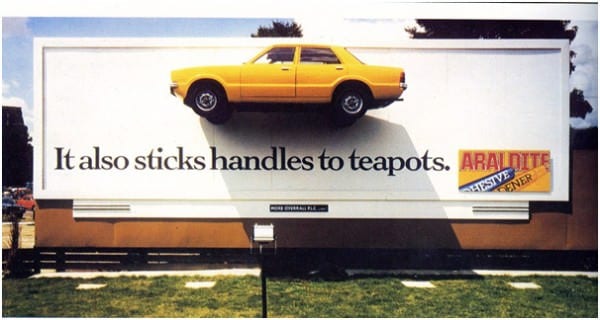 And the point was this 48 sheet poster only ran for one week on the Cromwell Road, London. And yes, it was a real Ford Cortina. And yes we used Araldite to stick it on (with belt and braces supports to satisfy Council requirements). Just one site; just one week.

Then we ran another poster. 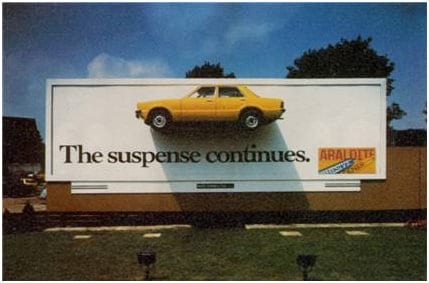 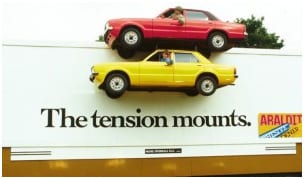 And finally a poster with a bloody great ripped hole in it with the headline “how did we pull it off?”

The point is this. You do not need to spend a lot of money on advertising. What you need is to create a noise which makes you look bigger than your budget, saying something dramatic, interesting and fun.

Apple in the States spend heavily on advertising. When he was there Steve Jobs knew a cool, engaging campaign gave his brand gravitas and salience. He was always looking for a clean, simple, big idea (although had he been King of Araldite rather than Apple I suspect he’d have wanted to use a Porsche 911 rather than a Cortina.)

So whatever your role or specialty don’t turn your back on that ingredient in marketing that sings loudest and which when done well defines the whole marketing campaign.

Advertising is as dead as the great British pie which recently, as you know, had a great resurgence.

Thanks to Richard Hall for sharing his advice and opinions in this post. Richard has been CEO at FCO for 10 years - voted most creative Agency in London  and Deputy Chairman at Euro RSCG when it bought FCO.  Over the last 17 years Richard has chaired six Marketing Services companies, mentored scores of senior executives, written 10 books (including second and third editions and revisions) that have been translated and published in 24 countries. Chairman of Showcase Presentations, the Friends St Nicholas (local charity), RH&A (consultancy) and a creative think-tank called Colourful Thinkers. You can connect on LinkedIn or read his blog.