Has GDPR shut the door to consumers in the EU?

Another day, another GDPR post. This is not to be taken as tongue in cheek, it is the result of a grand change in the laws that govern data privacy in the EU. These changes are having an effect not only on EU borders but around the globe. I’m going to be looking at a few examples of how GDPR has caused the global digital landscape to change.

Our round-up and recommendations on practical steps to comply with European Union data protection and privacy legislation.

GDPR has struck fear into a lot of businesses that fall inside the EU borders with the idea of costly lawsuits being the main deterrents. It would be crippling to a lot of businesses in a PR sense and in turn, a financial sense through loss of potential revenue. How could you not when the sanction for breach of compliance is 4% of revenue or $20 million, whichever is greater. Not many could weather a financial storm of such magnitude especially when added to the inevitable legal costs that will come with it.

Meanwhile across the pond

In the US they have taken a relatively hardlined approach to making sure they stay compliant within the publishing and media industry. Many news outlets have decided to block EU users entirely with a view to protect customers and, at the same time, themselves. The LA Times and The Washington Post have each taken a slightly different approach. 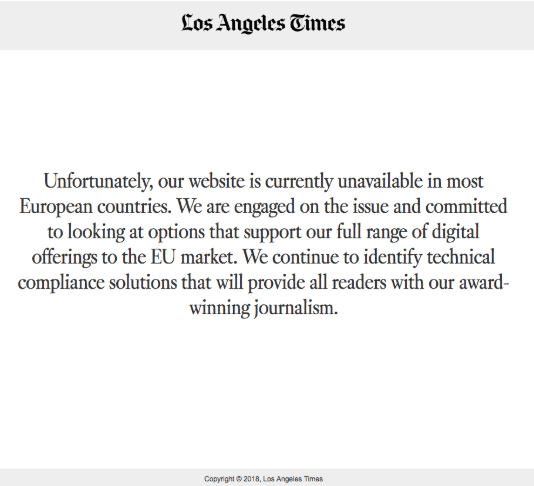 The LA Times has restricted all European countries, including non-EU countries, whilst not mentioning GDPR or data privacy at all. They have tried to steer clear of mentioning the issue in an attempt to keep a positive spin on their top-level resources and journalism. This is a risky approach as ultimately they have not given a reason to customers as to why they are blocked from consuming their media. 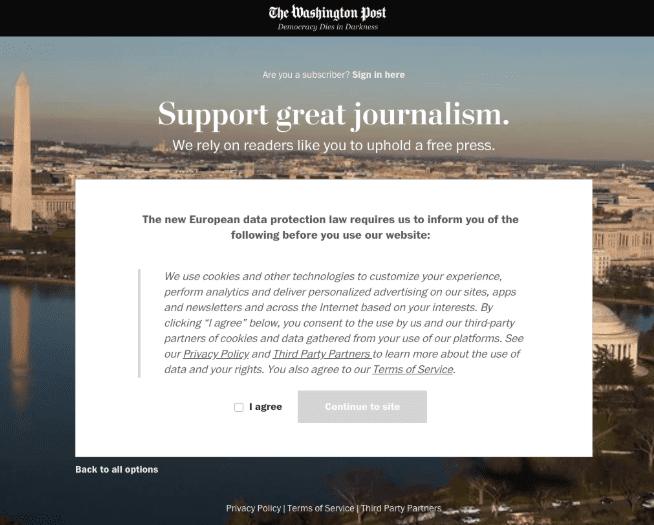 However, The Washington Post is being transparent about data protection laws, but aren’t blocking EU countries. In this case, they have stated the data usage and what it is for. They have also allowed users to access their full privacy policy and Third Party Partners list so that users know who their consented data is being shared with. Accepting this, grants access to the site.

The location-based mobile platform, Verve, has chosen to close down its European operations completely. This strategy will add focus to their US market with Ian James International General Manager, telling The Drum that the realities of a post-GDPR, from May 25 onwards, wasn’t the only motivation for the company shutting its operations in Europe.

“It wasn’t the only thing who the world was different for Verve, but it’s a big contributor,” he said. “Verve’s board decided that where the business needs to focus as a strategic realignment, is the United States.” - The Drum

This approach is aggressive and risky. The closure would mean the loss of 15 jobs in their employee base and certainly losses in revenue. Protection of the company seems to be the main driver here over the protection of customer data and even their own employees.

This last one has actually been removed now, as the site is available to EU customers again. The reason I show it is it highlights the complexities of GDPR and the level of caution that is being taken with all genres of online companies. 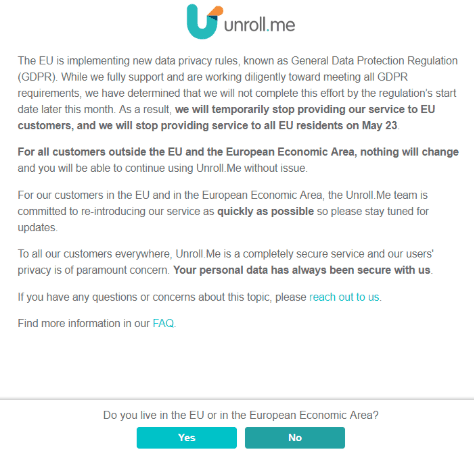 Unroll.me is a service that enables users to unsubscribe from one or all their email subscriptions at the click of a button. Yes you read that correctly. The service has a crawler which can detect all subscriptions attached to any given email and then collates them in a list. You can then instantly unsubscribe from your subscription easily within the site itself. It became popular with users as a great solution to one of the most prevalent aspects of GDPR law. The delicate subject of receiving too many or unwanted/unrequested emails is a problem that Unroll.me is the perfect tool to resolve. Slightly ironically it was not meeting GDPR standards when the law came in a month ago.

With these restrictions not being localized to the US companies described, the effects on the companies involved may not be so impactful. The revenue created within the EU versus the cost of becoming compliant or stopping all activity is probably the main driver here. In the case of Verve it seems the freeing up of resources for the US market would remove the impact made from stopping EU business activities. In the rest of the cases, the short and longer term changes made to their privacy procedures is a more cost-effective solution than the impact of fines or stopping activity all together.

Is the door shut for good on the EU?

It seems that the door will only be closed in the most extreme cases. Verve will certainly not be available anytime soon but with most businesses, it appears the EU is too valuable source of revenue. This has meant that companies are working hard to get back up and open to the EU. The shop is closed for now but consumers can see it as a sign in the window saying “Back in 5 minutes”. As with a shop,when you see a sign like this you keep faith in the organisation and don’t cut all ties.