Are Spotify and Valve models to be followed or impossible to replicate?

We live in an age of Digital Disruption. The biggest transport provider (Uber) owns no cars, the biggest accommodation provider (Airbnb) owns no rooms, the biggest content provider (Facebook) creates no content. These new businesses have brought with them radically different models of organisational structure which was part of the reason they were able to do better than anyone before in their respective industries. Many of what were once new and exciting little start-ups, involving young folks tinkering in their garages are now massive businesses with more conventional corporate structures. Google and Apple are now two of the Worlds largest companies, and have all of the usual trappings of corporate hierarchy, like Presidents, CEOs, and managers of all different types.

But there are some companies which have retained their start-up culture and really do have radically different structures, which most marketers would hardly recognise. To understand if established businesses can actually learn anything from these new methods of organisation, which do successfully deliver increased innovation and creativity, first we need to understand the structures themselves.

There are plenty of companies that like to talk about a flat corporate structure, but Valve really does mean flat. I'm talking flat with a capital F. The American game company has no managers, no board, no one reports to anyone. Everyone works on what they want to, and no one can tell someone else what to do. 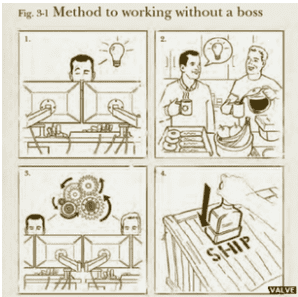 Well, that's the case on paper at least. There is a recognition in the company that the founder (Gabe) retains the most influence. The official company manual states that 'Of all the people at this company who aren't your boss, Gabe is the MOST not your boss, if you get what we're saying' in an Orwellian nod that's in equal parts witty and chilling.

No one reporting to anyone seems to most managers like a recipe for disaster, but the incredible level of autonomy does seem to work. Valve has been enormously successful and created some fantastic games. Whilst you probably don't want to abolish all levels of your corporate hierarchy, there are a few things that work well at Valve that are at least partially replicable:

Valve grants it's staff incredible levels of autonomy. They work on what they want to, based on what they find interesting.  It sounds like a recipe for chaos, and yet they produce great games which are the results of complex projects involving large teams of people. The lesson here is not that if you leave your employees to their devices they'll spontaneously organise themselves into great teams, but it does show by having faith in their abilities to make the right calls, you can let them get on with their jobs without micromanaging.

Granting trust and responsibility engenders more of a community spirit within teams that makes people feel they belong more in the organisation. The lesson from Valve is to have as few restrictive rules as possible, if your employees feel constantly monitored and bound by tight rules they'll only try to subvert them, whilst if you grant them freedom they'll often repay you with greater diligence. 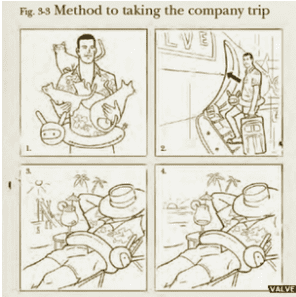 Everyone says team work is important. Every manager wants their team to get on well and spark ideas off each other rather than grate on each other or engage in one-upmanship.

But do you actually invest in generating a sense of community, or do you just expect everyone to get on like old friends right from the get go? Valve send every single one of their staff on a week holiday every year expenses paid. The whole team go together to the same destination to relax, chat about what makes them tick, and generally get to know each other outside of work. There's no cheesy and annoying team bonding exercises. It's just about having fun. It's this kind of great investment in company culture that means the flat structure dependent on the staffs self-motivation actually works.

Being flexible applies to everything, even the furniture 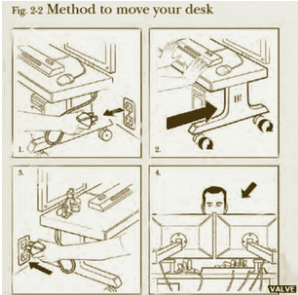 One of the smaller details about Valve's organisation is worth picking up on. All the desks have wheels. Staff are encouraged to move around a lot, and when teams come together to work on different projects, the desks come too. It sounds simple, but it means new work groups can form and disband for different projects a lot more spontaneously. Where as moving office might usually take half a day and thus be a time-consuming faff, wheeling one's desk around takes a matter of minutes. It lets teams be a lot more flexible and means people can get contributing right from the get go.

The dark side of flat management

Valve's radically different take on corporate life provides some great lessons for employers. But don't be fooled, any organisational structure comes with downsides, and Valve is no exception. It's important to realise it does not offer some kind of business nirvana.

According to former Valve employee Jeri Ellsworth "there is actually a hidden layer of powerful management structure in the company and it felt a lot like high school. There are popular kids that have acquired power in the company, then there's the trouble makers, and everyone in between". Decisions are made by consensus, but achieving this consensus, in reality means the agreement of the valve old guard which are the most connected. If you don't have them on board, they can effectively kill your project.

This isn't really any different from other organisations, it's just usually the structure is overt, and everyone knows the rules of the game, so it doesn't feel disingenuous.

Whilst not as super-radical as Valve's totally flat structure, Spotify is another start-up with some very interesting institutional innovations.

The engineering team is divided up into squads, chapters, tribes and guilds. Squads are small teams of 8 people who all sit together, work together on a shared project and self-organise. That is they don't have a manager of the squad like a 'scrum master', they just agree work between themselves. The beauty of squads is their small size allows them to work and feel like a start up, and they're given the freedom to use whatever method of internal working suits them best. 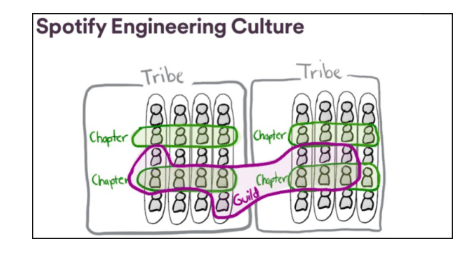 A bunch of squads working in related areas form a 'tribe'. So there might be a mobile tribe for example that works on the mobile experience, and within that there are squads working on different mobile operating systems or different aspects of the mobile interface.

Chapters and guilds work across squads to ensure there is communication between teams no duplication or overlapping roles. Chapters group together people with similar skills sets, like graphic designers for example, so they can share expertise and make sure no two designers are working on over-lapping briefs without knowing. Chapters have a chapter lead who is their line manager to provide leadership, but the chapter lead also works within a squad, so is not separated from day to day activities.

Guilds are again about meeting up to share information and best practices, but these are larger and include lots of different roles. This is a great way to break down silos and make sure lessons learnt by one group are not lost on others.

What we can learn from Spotify:

Spotify's innovative structure has two massive benefits. Firstly the small size of the squads allows them to retain a start-up culture with an agile and flexible approach. Secondly, the way that rather than having a traditional top-down hierarchy the larger organisational groupings work across teams facilitates far better sharing of knowledge. Managers are always talking about the benefits of breaking down silos, but little is actually done. This kind of structure does it extremely well.

If you work at a company that already has a defined structure, you obviously aren't going to throw it all out the window to totally reorganise yourself in Spotify's image. But you could consider setting up meeting groups to share information learnt across teams. Granting greater autonomy to self-managed small teams may also be a way to implement some of Spotify's lessons without throwing the baby out with the bath water.

What not to take away from Spotify:

All too often management ideas which seek to simplify and get rid of needless jargon and complexity end up creating a glossary of jargon all their own. Gradually layers of complexity get added until you're left with something no better than what you had before. What you definitely shouldn't do when trying to learn from Spotify is just start renaming departmental structures with hip new names to try and replicate start-ups, but leave the system unchanged. If you start designating your workgroups 'squads', change the names of line managers to 'happiness officers' and call what was the marketing department the 'awesomeness guild' nothing will change, except your staff might find the whole thing faintly ridiculous. What's important is the institutional structure which grants agility, flexibility and facilitates inter-departmental learning. What the structures are called doesn't really matter.

To conclude, whilst established business shouldn't try and replicate Valve and Spotify's radically different team structures directly, they're are elements they can learn from and put in place which can greatly improve teamwork, collaboration and results.

We’re often asked what the ideal digital marketing team looks like. This will naturally depend on the type of business and its size, but there are some common activities that need to be managed. The aim of this template is that you can compare these structures to your current situation to help plan future changes.