Campaign of the Week: Google takes aim at Apple

In its recent comparative advertising campaign, Google promotes its Pixel 3a model as a cheaper and higher quality choice over Apple’s XS, putting it side-by-side with the Apple product in a face-off of the tech giants.

Why beat about the bush in advertising when you can directly compare your own product to a competitor’s higher-priced and (in Google’s opinion) inferior one?

We’ve seen examples of this kind of advertising for many years, from supermarket chains’ regular competitor comparisons to the “Get a Mac“ campaigns of the noughties. It appears that Google felt it was high time that this time round a company went after Apple. 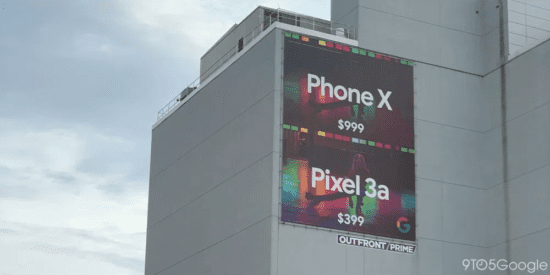 Indeed, Google has set its sights on Apple, with billboards and video ads from the Alphabet-owned company claiming that the Pixel 3a provides better quality low-light photography at a fraction of the cost of the iPhone XS.

For starters, the slightly ambiguous wording of “Phone X” does not actually refer to Apple’s iPhone X, but rather “Phone X” is used as a pseudonym of sorts for the iPhone XS. The pricing clears up which of the Apple models is being referenced, but Google has certainly toed the line in this regard.

So what exactly is comparative advertising?

Google has pushed the indirect comparison to its limit (encouraged to do so by the name of Apple’s product) but there is, of course, no doubting which product Google is referring to here. The comparison, in essence, is an attempt to position the campaign somewhere between these two types of comparative advertising.

Looking beyond that, the campaign very successfully brings into question Apple’s pricing versus one of its main competitors. This price disparity is compounded when you then see the disappointing performance of Apple’s low-light camera in a mock set-up alongside Google’s Pixel 3.

Continuing the theme of ambiguity, Google chops and changes between comparing "Phone X" with both the Pixel 3 and Pixel 3a. It becomes difficult to know whether it is the lower price, the higher quality low-light camera, or a combination of the two that are being highlighted in each ad.

Certainly, for all the hype and anticipation around the release of Apple’s iPhone X and, later on, the XS, the price was something of a sticking point for many consumers.

The focus is both on the cost and the superiority of their low-light camera performance. This gives Google a 2-0 victory when you take the two products simply at face value from these ads. 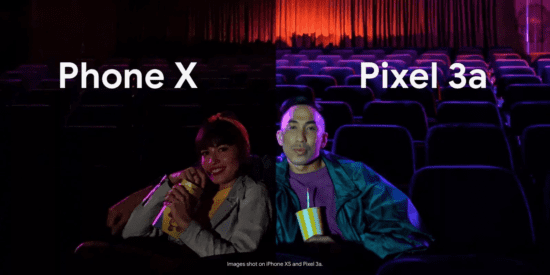 Google, we assume, does not condone the use of phone cameras inside movie theatres, but the difference in performance is stark.

The choice of setting does detract from this ad though - are Google suggesting that you would choose their model over Apple’s because of its ability to take great pictures inside a movie theatre? For this reason, this ad fails to hit the mark in the same way as the rest of the campaign.

Alongside the print and TV ads, meanwhile, Google has released the “Full Rant” version of “Real Talk with 2 Chainz and Awkwafina”, taking two American rappers and having them tear into the pricing, battery life and performance of Google’s competitors (naming no names).

The situation, script and idea are, in my opinion, both brilliantly entertaining and make a strong point.

So many smartphones have become extortionately priced without offering value for money, manufactured with what seems to be (and, in Apple’s case, truly were) deliberately built-in restrictions on battery life, performance or storage.

Comparative advertising legislation around the globe

Comparative advertising is not just legislated for but actually encouraged in certain nations, as it allows consumers to be better informed of the purchasing decisions that they are making.

Advocates of this form of advertising support it for its ability to level the playing field between competitors - smaller brands, with products priced at more competitive levels or with better quality product specs, can use this to draw attention to what they offer.

On the flip side, there’s the argument that comparative advertising allows emerging brands to use the brand reputation of an established brand to further their own cause, before earning that reputation and trust for themselves.

Nations position themselves somewhere on a broad spectrum when it comes to this issue:

For these reasons, legislation across the globe varies greatly, from the more relaxed laws in the US to the much tougher limitations in countries like Argentina.

Even in those countries where laws are more permitting to comparative forms of advertising, there are, of course, restrictions in place. The US Federal Trade Commission (FTC) lays out a set of basic requirements, which demand, above all else, that such comparisons are not drawn up to deceive consumers.

Understanding the minimum standard for comparative advertising is a helpful starting point. If you fail to meet the requirements of those nations that adopt a more “laissez-faire” approach, then your comparative campaign is unlikely to see the light of day.

The internet means that advertising now easily, and regularly, crosses borders, reaching consumers in countries where legislation differs from the country where the ad was produced. Being aware of where stricter laws are in place is important when trying to reach out to international audiences with this kind of campaign.

Aside from providing successful results, hence the fact that they are still a go-to for many brands, the exact reasons for comparative advertising becoming commonplace are not totally clear.

Since the financial crisis of 2007-2008, however, consumers have had to become much more astute with their spending. Catalyzed by the development of the internet, comparison sites also began to offer us the means to see how similar products and services compared in price between competing brands and sellers.

In essence, it now makes better business sense for brands to be increasingly focused on the price and spec of competitor’s products and services. Consumers themselves are now much more aware of the value for money that a particular brand offers.

There have been many famous examples of comparative advertising since this method of advertising first started to crop up in the early 20th century but, as we’ll see, the brands making the comparisons don’t always play by the rules.

Apple vs Windows - “Get A Mac”

The “Get A Mac” campaign ran from 2006 to 2009, with Apple looking to inform consumers of all the things that their “Better” product offered over what Apple perceived as the mundane offering of the Windows PC.

As this ad and Google’s demonstrate, comparative campaigns often have to draw upon elements of humour to detract from what is a cut-throat approach to advertising.

David Mitchell and Robert Webb also made an appearance in the UK version of the ads. Behind the humour, the two comedians serve a real purpose in the advert: drawing attention to Mac’s renowned security features.

Aldi vs the majority of its competitors

An example that will be very familiar to European consumers is Aldi, whose adverts regularly call out the price difference between its products and its competitors’. 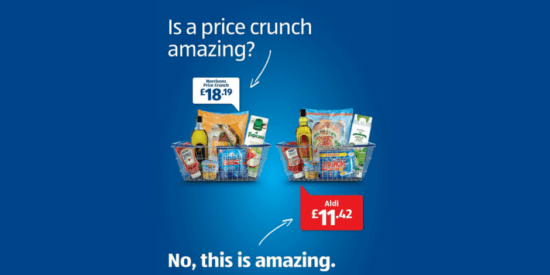 Aldi’s products are often branded similarly to competitors, demonstrating the dependence of large, established supermarkets on the sales of big brand name products. The German-owned supermarket then proceeds to massively undercut competitors’ prices with what some may describe as “rip-off” versions.

“Rip-off” or not, consumers have clearly taken to their prices because Aldi’s market share continues to surge, which suggests that the brand's direct, head-on approach to advertising is paying off.

In the advert above, Aldi is comparing itself to Morrisons, which it is soon expected to replace as one of the UK’s “big four” supermarkets in terms of market share.

Aldi has proven, however, the risks involved when directly comparing yourself to your competitors - certain ads were banned in 2016 by the UK’s Advertising Standards Authority (ASA) following misleading claims about the price of a weekly shop compared to their competitors.

McDonald's is putting in huge efforts to turn its McCafe offering into a direct competitor of Starbucks. 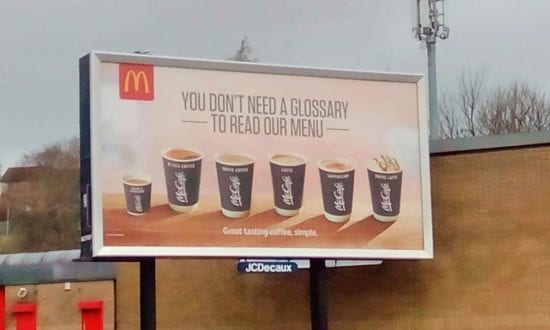 Once again, we see an example of a satirical approach. It succeeds in drawing consumers attention to the slightly pretentious naming of products across certain menus. 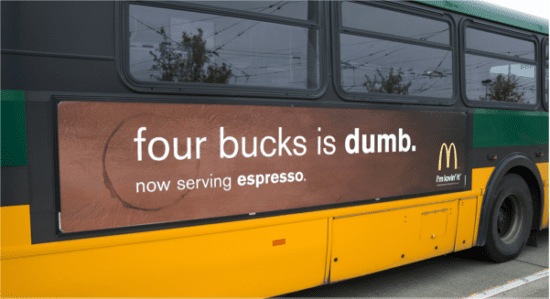 The comedic element also allows McDonald's to highlight an issue of greater importance for many regular coffee drinkers: pricing.

By highlighting a specific feature as well as the much lower price, Google has delivered a campaign that is sure to have ruffled a few feathers at Apple, whose monopoly over the smartphone market cannot be refuted. This campaign is, therefore, as much a sign of Google’s aspirations to make its mark as it is an indicator of Apple’s dominance in this market.

With its unashamed attempt to undercut a main rival’s product, Google has taken a risk. Given that Apple has a history of directly comparing its products to a competitor's, a reciprocated campaign from the team at Apple is certainly one to watch out for.