In the past, many marketing myths were often elevated to the status of being sacrosanct. Given enough repetition, ‘facts’ degenerated from ‘hearsay’ to probability, to ‘gospel truth’.

Yet, despite the incessant repetition, unless the core message at the centre of a campaign resonates as plausible fitting perceived experiences, thanks in part to online information overload, even elaborate myths frequently get syphoned to the junk folder labeled, ‘marketing hype.’

So what happens online in 60 seconds? 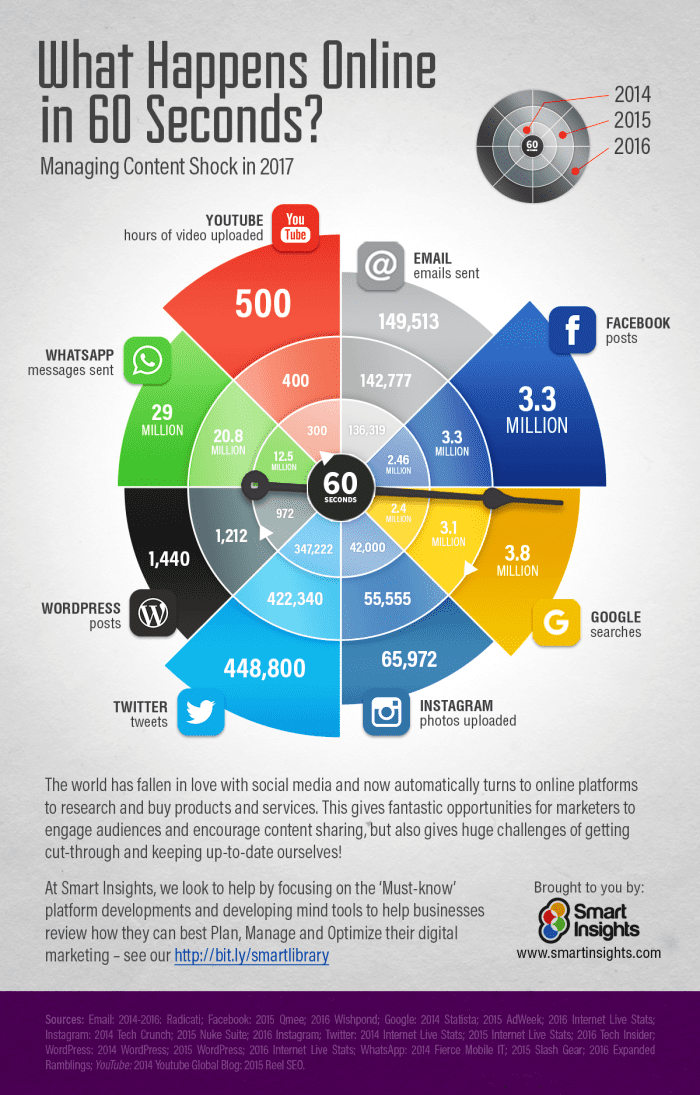 Unlike fine wine, some marketing assumptions become soured by simply hanging around too long for their own good. Take the tired obsession with marketing to Millennials.  Time to face up to the fact that the segment is maturing, people are having families, some even divorce, progressing in careers, or being lumbered (excluding ‘Generation Rent’) with hefty mortgages or grappling with over-bearing bosses to pay the aforementioned mortgages or rents.

‘Millennials’ (‘Gen Y’ … ‘Gen X’… ‘Gen Z’… even ‘Baby-Boomers’) marketing’s insistence on putting people into neat boxes sets a trap for stereotyping entire groups by age, rather than circumstances (which, as any sociologist can testify, more than often turns out to be the most significant driver of behaviours and attitudes)

Big data learning refines such assumptions as well eases the leviathan task of processing so zettabytes of information along with all its variables.

Having interviewed over 48,000 people across 20 countries, the research company Motivaction, shunned the myth that all Millennials think alike, and that their attitudes are different to other generations.  In fact, their findings revealed far wider differences in values and lifestyles within the millennial generation itself than compared to cohorts such as Gen X and Baby-Boomers.

That’s when the new European data laws come into effect. The regulations are set to radically transform how marketers exploit consumer data. Brands will need explicit consumer permission to contact consumers on mailing lists, databases,  or simply process personal data, irrespective of whether they or a third party are responsible for the data.

Theoretically, for every 10,000 names currently on lists, up to 7000 could become redundant.  Brands can expect big penalties for not playing ball.  Non-compliance will result in fines of up to 4% of global turnover, or 20 million euros; whichever is greater.

To put that into some perspective, taking the UK alone, if GDPR had been in place last year, the Information Commissioner's Office (ICO) would have collected some £69m in levies rather than £880,500.

Once GDPR goes ‘live, any EU company conducting business with a consumer or another company will need to be compliant.

A survey by the World Federation of Advertisers (WFA) of major global brands spending more than $20 billion on marketing annually highlighted the knowledge gap. 70% of brand owners felt marketers were not fully aware of GDPR’s extent.  65% expected to be fully compliant by GDPR’s start date. 56% said European teams were aware of GDPR.  Only 44% globally and a mere 41% claimed to have any strategy at all in place.

Without necessary permissions in place, the ability for marketers to purchase mailing lists will notionally come to a grinding halt. What’s more, once a list is breached, with 72 hours both the regulator and the customers affected will need to be informed.

Telly is on the blink

Despite millions preferring to gongoozle smartphones and tablets rather than stare at the ‘goggle box’ in the corner of the living room, research by Thinkbox, the official UK marketing body for commercial TV, suggests that weekly, TV reach remains at an astonishing 93%. The average viewer is ‘glued’ to three hours 26 minutes watching per day of TV on an actual television as opposed to web-enabled portable devices.

Moreover, that viewing time is only four minutes less than back in 2006, when domestic Internet penetration was less than 50%.

What about binge-watching of pre-recorded box sets?  86% of TV viewing is live.  During the first half of 2017, the average person in the UK saw (as opposed to ‘watched’ and all the linguistic nuances associated with that word) some 43 TV ads per day. However, according to the Institute of Practioners in Advertising (IPA) one unbusted myth relates to younger people watching TV.  They watched less however, IPA’s research into Media Touchpoints noted that life stage impacts time spent viewing. The older the viewer the more they watch traditional TV. (Adding my personal observations from my elderly mother’s senior citizen apartment block – I would venture even further – suggesting that for many aged over 80 – watching TV – especially soaps and shopping channels – is akin to being hooked up to an oxygen machine 24/7).

Bricks and mortar shopfronts are kaput

Irrefutably brands are encouraging us to shop exclusively online. Huge budgets are invested in humanizing the story of online being the smart way ahead for anyone with even a modicum of style, savviness or societal awareness. However, despite continuous growth as of 2017 in the UK online only accounted for a relatively low proportion of overall retail sales: according to the Office of National Statistics: 16% of overall sales in July 2017.  Food only accounted for 5.3%. In the US, according to the US Census Bureau, e-commerce sales accounted for just 8.2% of sales in Q2, 2017.  Whilst retail ecommerce will increase to $4.058 trillion by 2020, eMarketer estimates that it will only make up 14.6% of total retail spending.

With marketers continuously integrating data collected from ‘touchpoints’ throughout the customer journey (including influences from third-party channels such as review sites) progressively the future will combine both online and Bricks and Mortar. (It’s one of the reasons why Amazon and Alibaba recently invested in physical stores which will play a crucial role in the final ‘few steps’ of the customer journey).  From the psychological point of view, this offers the consumer with essential human-to-human interaction and reassurance at the final critical point of sale.

In other words – personalized by either time, occasion, name or demographics emails.

In other words – unfocussed, irrelevant and/or excessive emails in the vain hope that quantity over quality will increase awareness. The solution? Employ professional writers rather than outsourced, unproven, undertrained casual workers to produce content such as blogs.

Attention deficiency means people prefer to watch a video or take an interactive quiz than plough through the PDF e-book collective wisdom of yet another ‘expert’ who penned his or her clichéd tome at a local Starbucks in between jobs in the ‘gig’ economy.

Accurate monitoring of sales enquires, including demographics, requirements and so forth can make or break turning casual online inquiries into qualified bona fide leads. To be effective, implement simple lead-scoring schemes, ensuring sales and marketing departments collaborate at every stage of a new business journey.

SEO is all about the right choice of words

Great – you have run your content through keyword comparison software – but are you paying as much attention to tagging pictures, videos and so on?

Automated marketing is always the answer

Facebook organic reach is at an all-time low.  Solution?

Er, nope… unless the content is useful it’s just another iteration of ‘cute kittens’ wallpaper.

Millions of ‘flick n flip’ mobile device consumers may see your digital content – but without engagement, you are just solutions and questions that pass each other in the ether.

Whilst the rise of ad blockers has been extensive, consumers may still put up with ads -providing the ads are appropriate and non-obtrusive.

A great product will still sell itself in 2018

The codfish lays ten thousand eggs,
The homely hen lays one.
The codfish never cackles
To tell you what she’s done—
And so we scorn the codfish
While the humble hen we prize.
Which only goes to show you
It pays to advertise!