I said the same thing about mobile phones, fifteen years ago, but I really believe Google Hangouts really are the future. In this article you will learn what a Google Hangout is, how it works, and how you can put it to use. They have been around for a little while but there is something in the zeitgeist at the moment because everyone seems to be talking about them and now through them!

I blame Spielberg for his press stunt when he did a Hangout with an actor from his new film Lincoln in 2012 - it was broadcast on the ABC SuperSign in New Yorks Times Square, as well as online of course.

What is a Google Hangout on air?

So, if you took the time to watch the above video, you will have more of an idea of what a Google Hangout is. The word ‘hangout’ is perfect because of its vagueness. This facility can be used for everything from a business meeting to a rock concert. The elements to note are:

A hangout functions like a live broadcast, combined with what might be traditionally called video conferencing. You can have up to 10 people hanging out at any one time. All they need is a computer with a web cam. At the same time, many other people can watch/listen in.

Once it is saved to YouTube, your Hangout is automatically shared on Google+, on your YouTube channel and you can share it with the URL or embed code via any social media, as usual with YouTube. This means that the Hangout can have an extended reach over time, as well as space.

How do Hangouts work?

Anyone who wants to be involved in a Hangout needs a Google+ account. A Hangout takes a bit or organization. You need your core 10 people (maximum) to be online and in front of their computer/web cam at the same time. 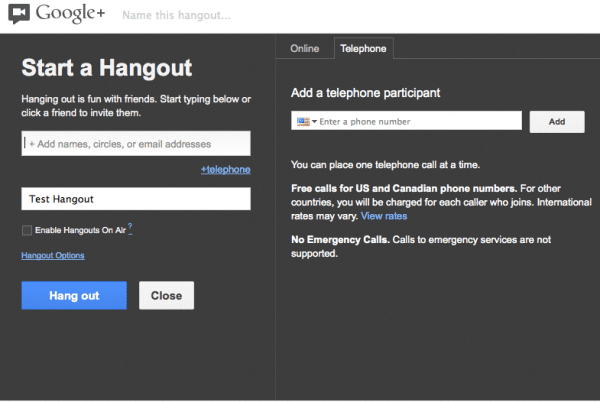 Give it a name

The name you give your Hangout will be what is displayed in your Google+ stream and in your invite to other people. Once you have set the name, you can’t change it. This is also the name that will be given to the video that is generated for YouTube from your Hangout – you can change the video name when in YouTube.

Knowing how the invite system works is important to ensure you maintain as much control as possible over who is able to access your Hangout.
You can invite individuals or your circles via Google+ to your Hangout.
You cannot invite extended circles or the public to join broadcasted Hangouts
Your participants won’t see a visible option to invite others to your Hangout. However, if they copy the URL and paste it to send to others, those others will be able to join the Hangout (if it isn’t already at full capacity).

There are a few ways that your Hangout can be viewed live:

To stop the live broadcast of your Hangout, you just need to click the ‘stop broadcasting’ button.

It may have crossed your mind that it would be useful to be able to moderate involvement in a Hangout, given the ‘live’ nature of it. There are a few tools available. Firstly, it is possible to ‘mute’ participants (simply hover the mouse over their image and a mic icon appears for you to click on). However, the user can undo this from their computer. As a last resort, there is also a ‘block’ function.

Once your Hangout is over a recording of it will be saved in each of the places it was broadcasted i.e. Google+, YouTube, and any websites where you embedded it. To make changes you should go to your YouTube account and to the Video Manager. Here you will be able to change the status of the video from public to private if you wish. You will also be able to change the name of the video (title) and add a description.

YouTube offers some useful editing tools, including a trim function. This will enable you to cut out anything that you don’t want in the final video. It is also possible to download the video so that you can edit it in other software.

Here is an example of an edited version of a Hangout involving the Dalai Lama.

ARVE Error: id and provider shortcodes attributes are mandatory for old shortcodes. It is recommended to switch to new shortcodes that need only url

How can businesses make use of Hangouts?

There is one overarching way that businesses can make good use of Hangouts and that is by generating unique video content for their YouTube channels and their website. This content could take any number of forms but here are some ideas that we think are great opportunities to broadcast live, as well as creating content that will have value over time.

A less exciting idea but still purposeful. Hangouts are a tremendously useful tool for holding business meetings, especially in the global environment. It doesn’t matter where your relevant attendees are, you can hold a Hangout. There will obviously be some meetings that it wouldn’t be appropriate to broadcast live, but you can see the potential. I may be betting carried away but Hangouts could assist in improving democracy by increasing participation in local politics; local authorities could broadcast public meetings and members of the general public could listen in from home.

Hangouts can be used to launch new products. As well as having one key presentation, you could have participants feeding back their initial impressions and asking questions. This can be broadcast live, recorded and kept on YouTube for future audiences.

Invite some well-known individuals in your industry to participate in an interview/hangout. This gives both you and your audience an opportunity to ask direct questions to them. This will help you to become an authority voice that brings new ideas to the party.

Hangouts can be used to create practical video content. For example, a detailed demonstration of the functions of a product, along with Q&A’s from members of the public and/or commentary from industry experts. Once on YouTube, customers will be able to access the video when seeking guidance on how the product works. The video could also be placed on the product page of the business website so it is immediately accessible to customers.

You could hold promotional events via a Hangout. The potential is endless – music events, comedy, performances, press stunts. You can then make the video available for all to see – especially if it goes well!

Q&A with your big boss and customers

Another major benefit of creating video and other content from a Hangout is the sharing potential. You won’t be the only person with an investment in the video – all of the other people involved will also want to share it. This means that you will reach wider networks than you could have achieved alone.

Hangouts are easy to use and very intuitive. Give it a go to see what they might be able to do for you.

Neil Davidson is the Founder of MWP Digital Media, a leading Corporate Video Production Company. He also runs My Web Presenters who specialise in creating video spokesperson videos. They work with businesses of all sizes to create and market compelling and emotive videos that get specific and clear results. If you would like to have a conversation about how to create video for the web then please  contact Neil here.

Find out what video marketing trends you need to be aware of for 2020 in order to better shape your digital marketing strategy and deliver results. Social media, the rise of Stories and the way in which people consume media …..

Which is best for blog SEO: separate domain, subdomain or subfolder?

Video landing pages have a video embedded, illustrating the working or value of a service or product, and they can help increase conversion Marketers are constantly working towards improving the conversion rates of their websites. With the average website conversion …..