How important are multichannel customer journeys for your brand? 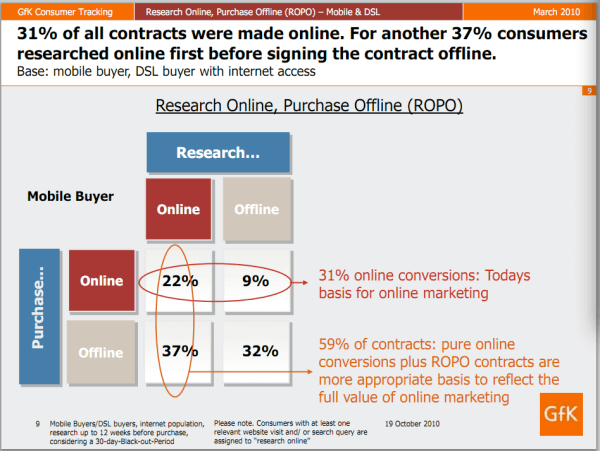 Our commentary on ROPO visualisation

ROPO is a term coined to describe research published by Google in this study meaning “Research Online Purchase Offline” (although it Research Offline-Purchase Online is another behaviour which can also be important.

This study reviewed the role of the internet in the decision process for mobile & broadband contracts involving the Vodafone website and stores in Germany based on a panel of 16,000 web users and questionnaires about their intent and purchase.

For both of these services, the contract was signed online by around a third of the audience. However, a significant proportion signed the contract offline.

The matrix presented above is a great framework for evaluating and summarizing multichannel behaviour since it also shows the situation where research is offline and purchase occurs online.

This behaviour is particularly common where products such as in this case, handsets, consumers want to evaluate their purchase offline by viewing and handling the product.

Actually doing this research is the preserve of big business, but as a way to think about consumer behaviour it applies to any business. It poses questions about how you facilitate customers to move between different channels - from offline to online and online to offline.

There is a danger that online and offline marketers think about their own silos and driving customers to conversion in each channel, whereas the reality is that at least a third of customers switch channels before the final purchase. Enlightened organisations structure their teams and remuneration to facilitate channel switching which is a natural customer behaviour.

Here is the full study: