With more businesses using Facebook Messenger for marketing, brands are also starting to take advantage of Messenger for surveys and research too

I'm always on the lookout for new ways of conducting research with users and customers and one study which caught my eye was how Liberal Democrats are using Facebook Messenger to run a survey. Liberal Democrats are a political party in the UK, we don't support any particular political party, this just personally caught my attention. They paid for sponsored ads, creating a specific "Lib Dems Listen" messenger account and then ran an automated survey. 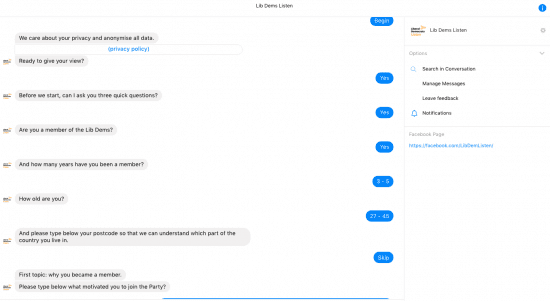 There are great advantages to conducting surveys in this way, firstly like any survey, it's automated but it's also much more conversational and it helps to engage with users who may be tired of taking traditional surveys, thus response rate technically should be higher. Customers always want varying experiences which is why survey after survey doesn't always work when you're trying to get as many opinions as possible. In their case, they needed a lot of respondents because they were asking about potential policies, something which is a vital aspect of any political party.

Previously, I have written about IKEA using chatbot surveys and how interactive this particular experience was. Marketers and researchers need to step up their game, it's becoming increasingly difficult to get "good" response rates, to recruit participants and overall to get the insights so we desperately need to run businesses, improve experiences and increase revenues. I'm not for one minute saying the traditional survey is dead, I actually believe the opposite - it's not broken so why fix it? But, it's all about giving customers a new type of experience and using a variety of research methods over time.

A few years ago market research thought leaders predicted custom branded research panels were the next big thing and they were, next we will most likely see an explosion in improved survey experience, chatbot style surveys and Facebook Messenger surveys.

There are great advantages to using chatbot style surveys and using Facebook Messenger - firstly you can ask more questions, there's no progress bar and with it being more conversational it helps to increase question numbers without affecting the experience, as well as encouraging more depth from open end answers. Facebook Messenger surveys are also mobile friendly. As it's quite a new data collection technique it's difficult to say how efficient analysis is, but new software over time should make this easier.

Chatbots can help marketers reach customers and prospects by engaging with customers in a more conversational way, we also have a great blog post on how chatbots are changing the way we communicate.

If you are considering using chatbot style surveys, I have some top tips to help you format the survey and questions.

The whole point of using chatbots or Facebook Messenger is that the environment and expectation is that's it's more conversational in style. Say "hi", include emoji's, it's all about engaging in a way that a conversation would.

Make sure it's mobile friendly

Adding options participants can select either with a mouse on their computer or on their smartphone, repeatedly typing can be annoying, and buttons in surveys make them easy, so include those in chatbot or Messenger surveys too. Participants can then just select options and answer open-ended questions as required.

You might be using more conversational language but it's really important to make sure question quality hasn't deteriorated. I advise following MRS guidelines and I also advise that questions are not leading, have opt-out answer options and "other" answers where appropriate.

Chatbot surveys are not an excuse to simply ask a ridiculous a questions because as result response rates may still be low and certainly, drop-out rates will be high if this is the case. An endless conversation is also annoying so you could give them updates on their progress, for example, say you're halfway through (and thank them) and then tell them when they are nearly done. It's also a good idea just like with surveys to give participants an idea of how long the chatbot survey will take and how it works.

The Liberal Democrats survey allowed me to skip on entering my postcode and allowed me to view the privacy policy before I started. The privacy policy was a dedicated one for the chatbot and was supplied by the software which was being used for the chatbot, so it clearly explained what data was being collected and what it was being used for. Make it very clear in the chatbot itself what data will be collected, how data will be anonymized etc. too.

Marketers and market researchers are always going to have to explore novel ways of getting feedback and I firmly believe innovation is key to increase data quality and survey responses to make much more accurate decisions.

Final tip, the app used by the political party was this one: http://www.apptivism.org/ just in case you're looking for some Facebook Messenger chatbot providers.