What percentage of IT projects fail? [#ChartOfTheDay]

Long ago, before the World Wide Web (yes such a time does exist, it was in the late 1980s, early 1990s), I worked as an IT project manager managing teams building marketing systems for clients and packaged solutions used worldwide. So IT project failure is still 'close to my heart', particularly since now with my focus on digital marketing we hear that many project failures occur raising questions about the Return on Marketing Technology (RoMT). For example, you hear shocking statistics like these bandied about:

They're certainly shocking and raise HUGE questions about the way marketing technology is procured and implemented today. Yet we need to be careful about their validity. As Venture Beat points out in its article behind the 70% failure statistic above, they are often based around spurious surveys and can be plain misleading. Venture Beat, in their 2015 report on Return on Marketing technology, present an analysis based on thousands of respondents which shows a very different picture:

"With a high level of confidence, between 1.47 percent and 5.73 percent of marketing technology implementations fail to provide a return on investment over a 3.5-year life cycle. It might not sound as sexy and compelling as “70 percent fail” … but at least it is the reality".

How do IT failure rates differ for different types of project?

Which brings us to the current Chart of the Day from a reliable source, which shows a much lower, but certainly not negligible failure rates, which raises questions about how marketing technology projects are managed: 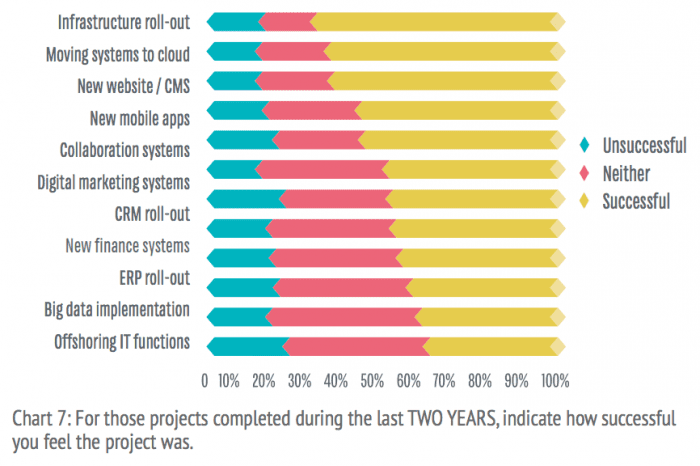 The chart shows that the majority of certain types of projects are rated as successful. For example using cloud services, new websites or CMS or collaboration systems. However, many can be judged a failure since fewer than 50% are judged to be successful including:

What do you think? I think these are truly shocking, particularly since this report surveyed CIOs who might be more likely to give a positive spin on projects that their colleagues 'in the business' or 'in marketing'. I suspect these project failure figures would be higher if others were sampled.