Embedding cognitive diversity within your team

The importance of creating a team and culture that thinks differently

Consider the marketing campaigns, advertisements, PR stunts and billboards that have caught the public’s imagination over the years. Whether it’s the Conservative party’s ‘Labour isn’t working’ poster, Benson & Hedges’ ‘Iguana’ ad or the Cadbury gorilla, they all have something in common: they offer something completely different from what had come before. 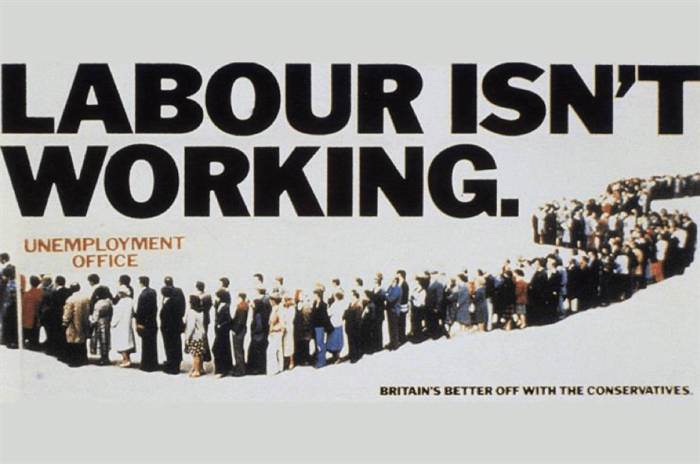 In today’s noisy and crowded media landscape, it’s arguably never been more important to think differently. Yet despite the vast number of ads we’re confronted with every day, people dislike advertising.

This study from Kantar asked a representative sample of consumers how they felt about advertising. In the UK, a grand total of 11% of the population surveyed said that they liked advertising. The other 89% either said they didn’t care or they disliked it.

It’s fair to say that creating promotional content that consumers will genuinely like and enjoy is an uphill battle but this doesn’t mean we should give up and stop trying. To find a way to stand out we need to build a team, company, brand or organization that brings together a diversity of thought and perspectives. Only then can you break the mould and escape the thought cages and group think that constrains our imaginations.

The aim of this template is for you can compare these structures to your current situation to help plan future changes.

To think differently, we must look to build a team with cognitive diversity. According to HBR:

“Cognitive diversity has been defined as differences in perspective or information processing styles. It is not predicted by factors such as gender, ethnicity, or age. Here we are interested in a specific aspect of cognitive diversity: how individuals think about and engage with new, uncertain, and complex situations”.

Whilst there are often very good reasons for bringing together a group of like-minded people (greater empathy with one another; shared perspectives and backgrounds; reduced conflict), there are also inherent dangers with this approach. One of the most notable is groupthink, a term coined by Irving Janus in 1972, inspired by the infamous Bay of Pigs fiasco under the watch of the Kennedy Administration. 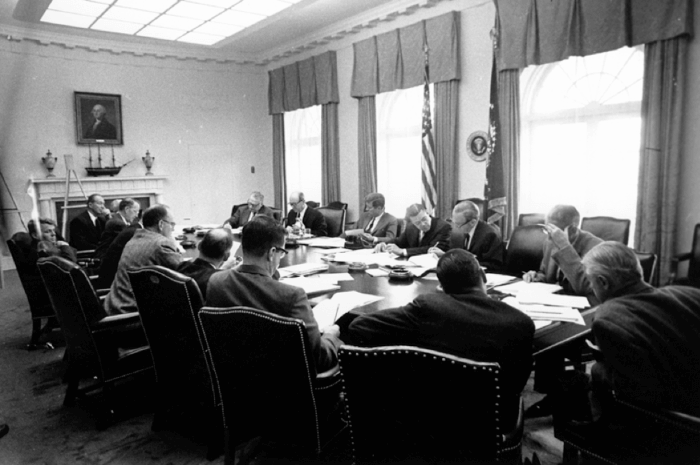 JFK’s top team was made of many great men with brilliant records of achievement in business, education, and politics. However, the reason the administration failed in 1961 was because everyone in it was all so alike. The theory of groupthink is that when you get people from similar backgrounds, education and social circles into a room, there is an impetus to agree with one another. Nobody wants to stand out. There is a pressure to confirm results in an incorrect or deviant decision-making outcome.

The path to innovation, great creative and fresh perspective does not occur when there is too much conformity. Indeed, a 2017 study from Harvard Business Review demonstrated that higher cognitive diversity correlates with better performance (teams A, B and C all had diversity of both knowledge processes and perspective, as indicated by a larger standard deviation): 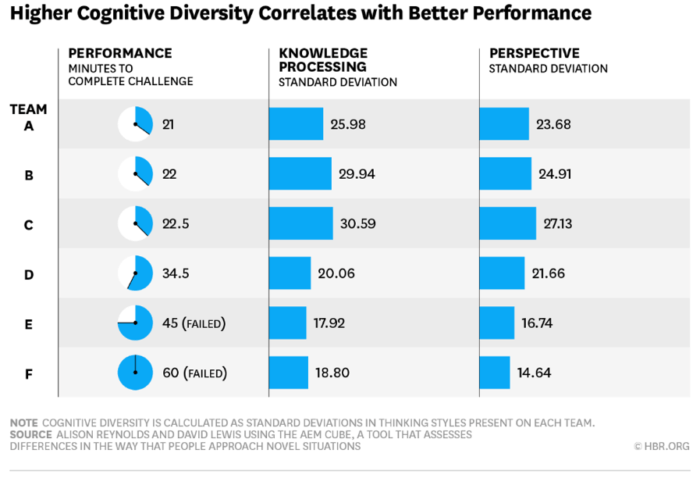 The benefits of embracing cognitive diversity

Whilst we’ve talked about the downsides of having a team of very similar people, what are the benefits of casting our net more widely and embracing cognitive diversity?

As illustrated above, a team of diverse individuals with different ideas and perspectives has the potential to generate more creativity and innovation. One of the primary reasons for this is ‘creative abrasion’, which occurs when you develop a culture where ideas are productively challenged.

A good example of this can be found in the work of the Beatles, particularly between Lennon and McCartney. Although they were alike in many ways, they also had very different approaches to songwriting. Lennon was more direct and lyrical, whilst McCartney had a stronger sense of melody and style. The two rarely wrote together but ‘competed’ with one another and challenged each other’s writing to produce some of the greatest pop music of all time. 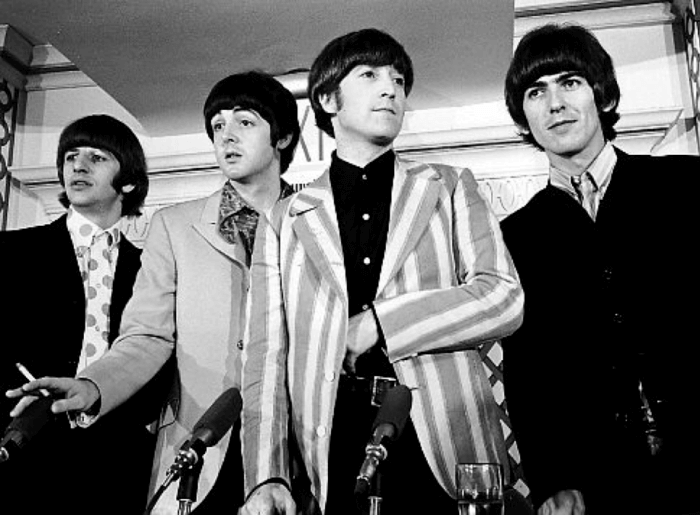 The Kennedy case study demonstrates that groups of like-minded individuals can stifle productive challenge and lead to sub-standard decision-making. Other famous examples of poor decision-making attributed to groupthink include the bombing of Pearl Harbour, the Challenger disaster and the 2008 financial crisis.

Productive challenge also enables teams to develop stronger resilience. If team members are all too alike and conscious of stepping on one another’s toes, they’re far less likely to challenge each other's ideas, and when they do this can lead to bitterness and resentment.

Three ways to make this happen

Creating a team with a diversity of thinking and perspective is not easy. We are all susceptible to unconscious bias and prejudices, which can manifest themselves in social stereotyping and a desire to build a team in your own image. But by recognizing the benefits of cognitive diversity we can begin to overcome these obstacles and create a strong, creative and well-rounded team.

To overcome the challenge and recruit a more cognitively diverse team, make sure your recruitment processes identify difference. Be explicit that your intent is to create a diverse team and you welcome everyone to be their best selves.

For example, job interviews tend to favour extroverts, who are much more comfortable about talking about themselves. Extroverts provide a huge amount of value but this should not overlook the merits of introverts. Unfortunately, people usually do not realize how great an introverted candidate is until the second or third interview (or even later), leading to missed opportunities. One way to get around this is to send out as much information about the role as possible in advance because introverts like to be prepared.

Line managers need to adapt their approach to the needs of their team to enable them to thrive within the team.

Consider the environment in which you work (open plan, shared spaces, etc.), working styles (e.g. dynamic working) and meeting structures. You do not know what you do not know to begin with, so encourage open conversations and between managers and direct reports so you build a richer understanding of who you’re working with and how to get the best from them.

Foster a culture of serendipity

To generate innovation and great ideas, foster a culture of serendipity and collaboration. At both Pixar and Apple, Steve Jobs wanted to create office environments that “promoted encounters and unplanned collaborations”, including working with Norman Foster to design what he hoped would be the world’s best office – the new Apple campus/spaceship. Steve Jobs explained:

“If a building doesn’t encourage [collaboration], you’ll lose a lot of innovation and the magic that’s sparked by serendipity. So we designed the building to make people get out of their offices and mingle in the central atrium with people they might not otherwise see.” 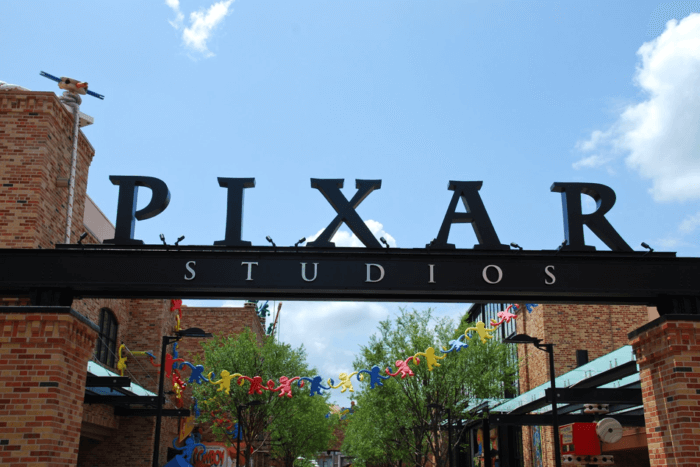 To generate creativity, innovation and new ways to deal with complex problems, we must encourage people to reveal and deploy their different modes of thinking. We need to make it safe to try things in different ways and be comfortable with failure.

If leaders embrace the opportunities of cognitive diversity, they must get better at building their team’s sense of psychological safety. In the modern business world it has become popular to talk of authentic leadership, which often translates to being yourself. Whilst this should be celebrated, it’s also important that leaders focus on enabling others to be themselves, too, and take advantage of the benefits this can bring.

Which CX metrics to add to your marketing KPIs

Metrics are your marketing scorecard, which is why you need to ensure you’re tracking the right ones Metrics are the ‘scorecard’ of your digital marketing work. When these metrics, also known as key performance indicators (KPIs), are moving upwards, you’re …..

Your guide to rock star in B2B marketing

B2C strategies can also be used for B2B audiences, after all, all marketing is human to human B2B marketing strategies can be hard to get a handle on since reaching potential customers is very different from B2C ones, right? Or …..

Identify the right strategies to improve your team's digital performance 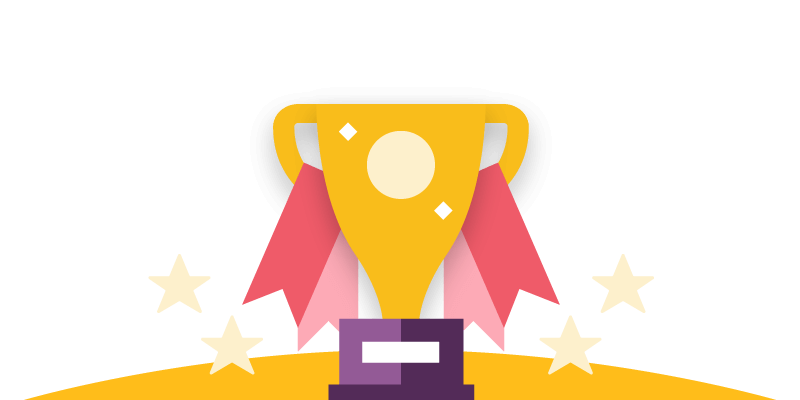