A Growth hacking case study: How to increase visitors by 16 million monthly unique visitors in one year

We've seen a lot of interest when we have written about how to apply growth hacking to marketing, so I thought this was an interesting case study to share in outline. It's also a great illustration of the power of combining SEO, Content, Social media and Email marketing. The growth in uniques over a short time scale is dramatic to say the least! 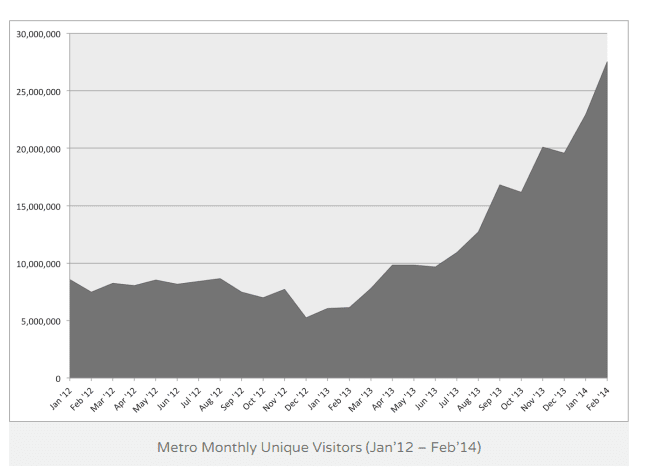 The case shows how businesses can tap into the continuous demand for content via search engines and social media to grow their audience. In this case, the business is a news publisher who many other types of online brands must compete with for a share of audience. So similar principles apply for non-publishers since "Every Business is a Publisher Today" - or should think that way...

The chart is from an article describing 10 Growth Hacks by Metro.co.uk‘s, Head of Development, Dave Jensen who shares some insights of how they increase unique visitors from 9 million to 25 million uniques in a single year. Dave Jensen looks to be a good example of what Scott Brinker calls The rise of the marketing technologist.

Some of these ‘hacks’ are technology and hosting relate such as adopting a responsive design, improving site performance and improving indexing of the site by Google to increase search referral from 2 million visits a month to 10 million over the year. Others changes involve opening the platform up to offer more ‘user generated content’ such as contributed blog articles. Social media optimisation was also a contributor of growth.

Even some simple SMO techniques to encourage sharing via Facebook generated a good level of growth. Dave Jensen explains:

Competitions were effective in bringing in users but there were a lot of repeat entries. Varying the prize helped to minimise this and our email based CRM platform really helped to drive entries. The most cost-effective way we found was boosting posts as friends of people who already liked Metro were shown a great piece of our content. They were then much more likely to then go on to like the page. As they were similar to people who already liked Metro they were very receptive and continued to engage with our content.

Facebook Page saw a big increase with 'Likes' increase from 173,000 in February 2013 to 562,000 Facebook Page Likes Feb ’14 with this social amplification also contributing to traffic.