US digital ad spend to outstrip TV this year, all thanks to mobile [#ChartoftheDay]

Late 2016 the tipping point will be reached, as digital spend outstrips TV advertising for the first time

If the forecasts based on current data from emarketer are correct, the US is about to spend more on digital ads that it does on to TV for the first time ever. This is the culmination of years of growth in digital advertising, but has been given a massive boost by the explosion of mobile ads over the last couple of years. From virtually nothing a few years ago, mobile advertising is in a renaissance. Now that over 50% of internet users are on mobile devices, it makes sense for budgets to be shifted to digital spending.

The data in this chart also points to other mega-trends, such as increased online video steaming rather than cable TV viewing, as well as increased time spent on social networking sites. These all combine to mean we are increasingly spending large chucks of our free time online rather than watching TV (or often doing both, and giving neither our full attention). As such ad spend is shifting towards where the eyeballs are.

This is good news for those of us in the digital marketing industry, but this is not the time to be complacent. Many advertisers still prefer TV for brand awareness, digital must prove it can offer the ability to tell stories as well as generate clicks. 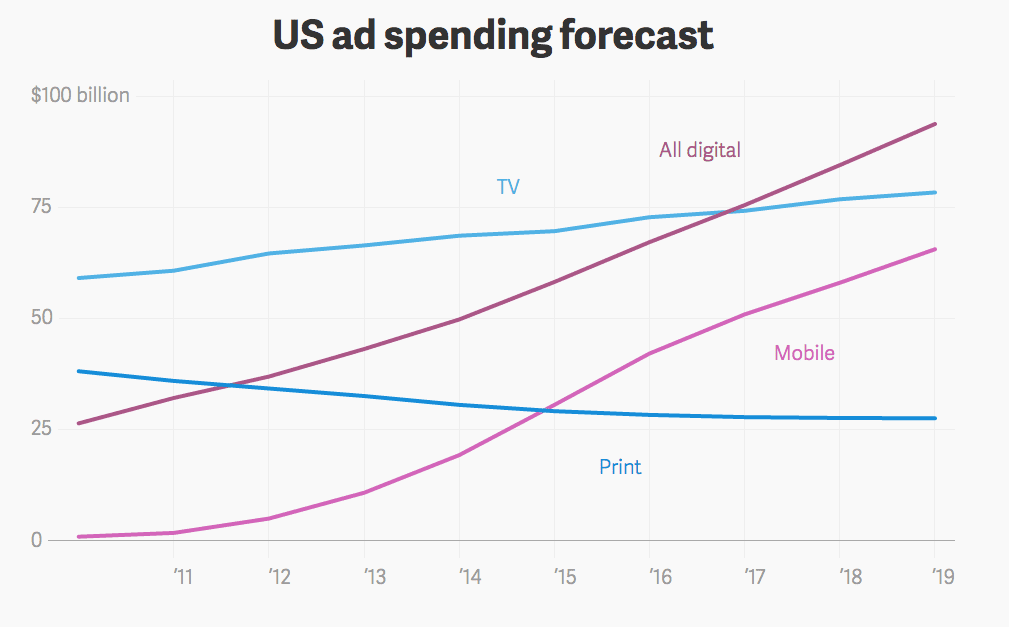 How businesses can serve international customers

Every step of international marketing needs to be considered carefully because your customers overseas have very different requirements Proving a big success nationally can make business owners hungry to expand further and while approaching the international market is something many …..

Who in the agency should work on discovery and how can you convince clients it should be paid for? In the Smart Insights Agency Guide to Discovery, I suggest a checklist of the areas you might explore as part of a …..